Apr 1, 2016 9:00 PM PHT
Facebook Twitter Copy URL
Copied
Various members of the UP Diliman community are devastated by the April 1 fire which burned one of the campus' historic buildings, along with hundreds of priceless research materials 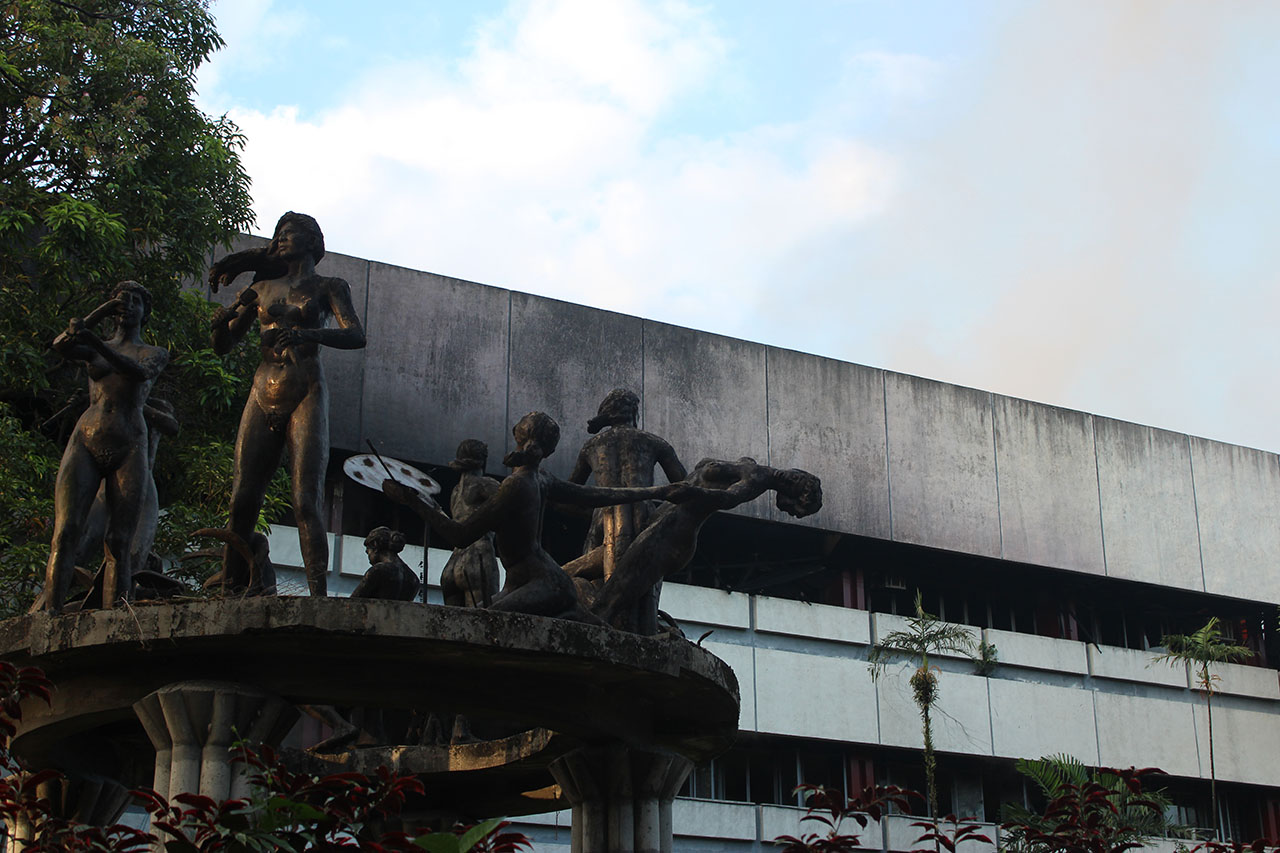 MANILA, Philippines – Jay-Ar Igno, a linguistics professor from the University of the Philippines – Diliman, never expected that the moment he arrived in school, he would find his second home in flames, all his files and books turned into ashes.

“I’ve worked here [since 2003], first as a student assistant, now as a professor. Almost half of my life was there, all the memories. [What] hurt the most was seeing all your valued books, student records, lost,” Igno said.

Igno is one of the many professors from different departments of the College of Arts and Letters (CAL), who lost priceless research materials, papers and books in the fire that razed UP Faculty Center early Friday, April 1.

Some professors were teary-eyed in the aftermath of the blaze.

UP Diliman’s Faculty Center, where I have been holding office for more than 20 yrs, has been destroyed by a fire.

CAL students and staff were shocked and saddened by what happened.

John Toledo, a graduate student from the Departamento ng Filipino at Panitikan ng Pilipinas (DFPP), thought the fire was an April Fool’s joke.

“Someone texted me about it, that it might be a joke. But seeing this, it wasn’t,” said Toledo.

Jowi Mariano, chairperson of the CAL Student Council (CALSC), was saddened by the loss of research materials and books collected by professors.

“It’s like you’ve lost your home, because all the research, the records, the valued materials, are now ashes. It’s depressing, because you don’t know now where to go when you need undergraduate theses or readings.” said Mariano, who is also a student from the DFPP, one of the departments first ravaged by the fire.

Other students expressed worry not only for their class records, but also for their professors, who were devastated by the damage wrought by the fire.

“It hurts to see your professors hurt like this, because almost their whole lives – their theses, laptops, dissertations – were lost. Even the libraries of other departments, and the departments themselves, are now gone,” said Cachel Ofilada, representative of the Department of European Languages to the CALSC.

On social media, some pointed out that the fire was not the first to happen in the university. (READ: Too frequent fires at UP Diliman?)

This raging FC fire is the third to hit UP Diliman. Before, twas Alumni Center, CASAA.

FC is home to CAL and has a historic lecture hall.

But with the latest incident, some asked whether it was time to make the necessary changes before it becomes too late.

The fire in the UP Faculty Center is already the third fire incident inside the UP Diliman campus in only ten months. What’s the matter?

It’s time UP fixes old buildings… not to make it prettier but to make it safer https://t.co/Vh3eFp6AkF

Fire that razed the UP Diliman Faculty Center today a testament to gov’t neglect of public education amidst intensified commercialization.

Because of the spate of incidents, some, like Pao Celeridad, are worried that other buildings on campus are also in danger.

I now fear for UP-Diliman’s libraries, especially that of UP Law, arguably the country’s largest law library. 🙁 https://t.co/vONCtPAVqQ

A netizen has also begun a Facebook page, Rebuild the UP Diliman Faculty Center, calling on concerned individuals to help build back in any way they can as a “way of saying thanks to all the faculty who have lost their second home.”

As the smoke cleared and the full extent of the damage became more apparent, the community waits for more than just a rebuilt building; they are looking for one that lasts. – Rappler.com

Violeta Bilbao is a Rappler intern, and a 6th year BA Creative Writing student at the University of the Philippines – Diliman.

(Editor’s note: In an earlier version of this article, we did not give due credit to the photographer. We apologize for the error and have made the correction.)