Facebook Twitter Copy URL
Copied
By the end of 2017, all 81 provinces will be covered by the provincial roads rehabilitation program, the Department of Budget and Management says

MANILA, Philippines — The budget department announced on Friday, April 22, that proposed funding for the provincial roads rehabilitation program has increased sixfold to P39 billion ($835.63 million) for 2017.

For this year, P6.5 billion ($139.27 million) has been allocated for the KALSADA program. “Konkreto at Ayos na Lansangan at Daan Tungo sa Pangkalahatang Kaunlaran” is a provincial roads rehabilitation program by the national government that funds local road projects.

Currently, it is implemented in 74 provinces, with about 150 road projects funded. (READ: Higher budget for provincial roads, infrastructure in 2017 – Abad)

“Through it, we capacitate local governments so they can make more strategic plans and budgets for managing their local roads,” Budget Secretary Florencio Abad said in a statement.

KALSADA program is performance-based. To access the funds, provinces are required to meet good governance and performance standards.

“When LGUs perform better, their communities benefit immensely from that. A strong LGU gives rise to a strong community,” said Abad.

In general, Philippine roads remain “poor” compared to most countries as ranked in the 2015-2016 Global Competitiveness Report by the World Economic Forum.

Of the 140 countries, the Philippines is 97th among nations in terms of quality of road infrastructure. Most countries that belong to the Association of Southeast Asian Nations (ASEAN) fare better than the Philippines. 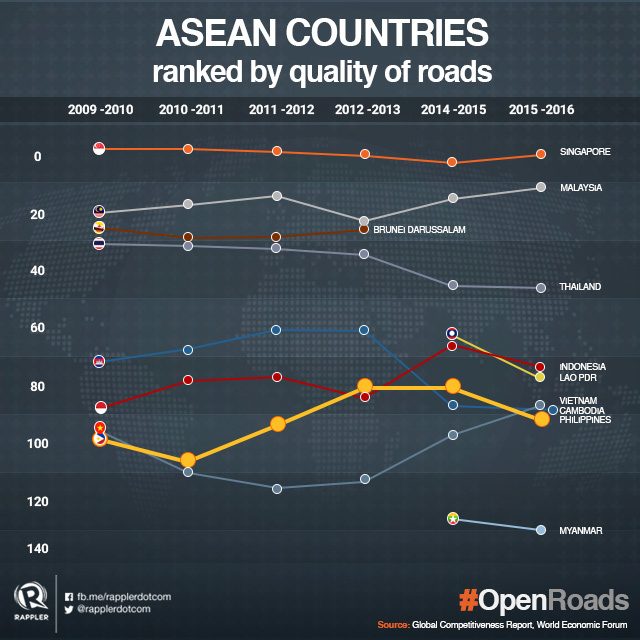 Under the Local Government Code, LGUs have full responsibility for road service delivery in their areas.

Abad said that weak local capacity for planning and budgeting and the lack of funds have prevented LGUs from providing good quality local roads.

Set to cover all

According the budget department, the program will scale up to cover all 81 provinces by 2017.

KALSADA targets to pave 832 kilometers or 20% of the total unpaved core provincial roads by end of 2017.

DBM also said that the program will require LGUs to include road maintenance allocation in their 2017 budgets.

As of the end of March, 24 KALSADA projects in 9 provinces are ongoing, 32 projects in 13 provinces have notices to proceed, and 74 are undergoing procurement.

Of the total, at least P5.7 billion or 88% of program funds have been released.

Of the pilot provinces, Nueva Vizcaya is one of the best performing provinces.

According to the budget department, construction of all road projects in the province has been ongoing since March 30.

“The biggest determinant of a province’s KALSADA allocation is performance. We looked at the percentage of road projects they completed in 2015, as well as the quality of roads they now have,” Abad explained.

Under the KALSADA Roadmap, projects that will upgrade and rehabilitate provincial core roads are expected to be completed by 2019.

“Local governments can only use a small share of our resources for taking care of our roads. With KALSADA in place, we now have greater capacity to maintain our own road networks,” Nueva Vizcaya Governor Ruth Padilla said in a statement. – Rappler.com