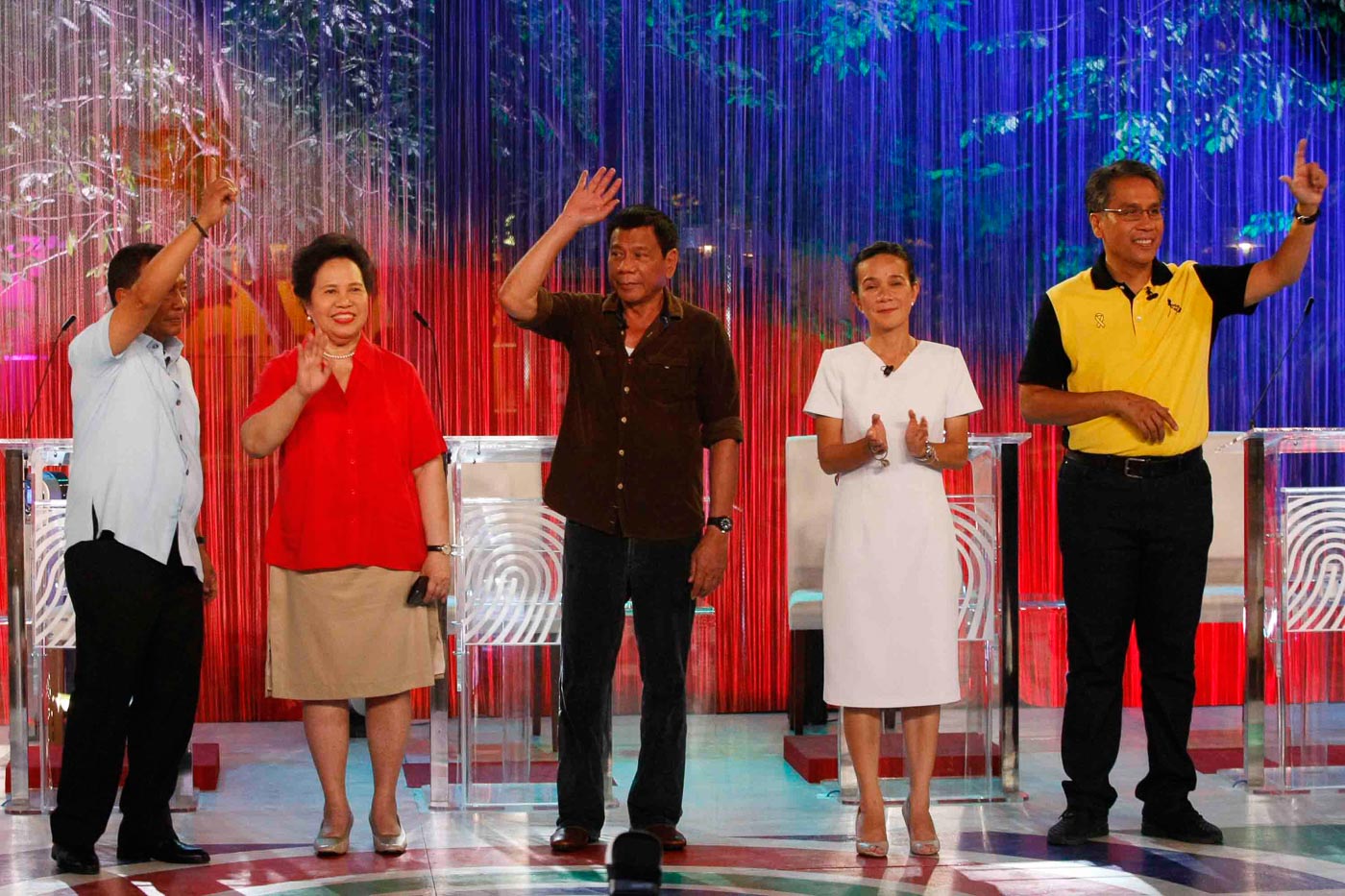 MANILA, Philippines – Did the presidential candidates give enough for voters to chew on in the last presidential debate? (READ: Substance, ignored issues should be last debate’s focus – advocates)

For Rappler’s pool of experts and advocates, it was an improvement from the past two debates, but it still was not enough in terms of providing details of the candidates’ platforms.

Congrats @ABSCBNNews for hosting a fantastic #PiliPinasDebates2016 . The vignettes were very good counterpoint to platitudes & promises.

Tonight’s #PiliPinasDebates2016 surely an improvement from circus that was in 2nd debate. But these r promises we’ve heard too many times

The advocates were displeased with the number of general statements during the debate, contrary to their hopes for more concrete plans.

Is this really a debate? Not much of a clash on policy or platform on the people’s issues! #KuwentuhangBayan #PiliPinasDebates2016

cheap proposals: traffic czar, OFW hotlines, an OFW dep. What will they actually DO?

Among the topics which struck a chord with the experts were labor contractualization and the plight of overseas Filipino workers (OFWs).

During the discussions on these issues, candidates proposed plans to end contractualization and supporting OFWs.

Micheline Rama of Dakila Philippines said the candidates only saw overseas work as a matter of choice, ignoring human trafficking and modern slavery.

No one is talking about human trafficking and modern slavery… It’s not all out of choice. #PiliPinasDebates2016 #PHVote #PiliPinas

According to the US State Department’s Human Rights Report, 400,000 women are trafficked within the Philippines annually. Around the world, the number of trafficked men, women, and children is 10 million.

Although the candidates mentioned plans to protect OFWs by training the embassies to answer their needs or by giving them financial options, Rama and sociologist Jayeel Cornelio noted how some issues related to OFWs were not tackled.

Disappointing Round 2: OFW & employment. Issues at stake for me: skills mismatch, weak support for the poor. #PiliPinasDebates2016 #PhVote

Activists have long slammed the government for a labor export policy. Remittances from OFWs have totaled $2.7 billion in 2015, according to the Bangko Sentral ng Pilipinas.

In 2014, 2.320 Filipinos worked abroad, according to the 2014 Survey on Overseas Filipinos by the Philippine Statistics Authority. For many of them, poverty and a lack of opportunities pushed them to work abroad instead. (READ: Mary Jane Veloso and the female victims of ‘labor export’)

For people who have used the debates to gain better insight, this was the candidates’ last chance to woo them.

However, past debates have also been slammed for lacking substance.

During the Cagayan de Oro leg, members of the crowd said they would have wanted to hear the candidates talk about the plight of persons with disabilities, indigenous people’s groups, the political involvement of the youth, and education.

Although climate change and education brought up in later debates, advocates still wished for more concrete ideas and substance.

Meanwhile, this was how some Twitter users summarized the outcome of the debate:

In line with record, consistency, plans, arguments, and relevance, we can only choose among Miriam, Poe or Mar #PHVote #PiliPinasDebates2016

But with all the debates behind them, time is up and the Filipinos will now have to make decisions with what they have.

Vote based on data and logic and not impressions. Governance is too important to leave to chances. #PHVote #PiliPinasDebates2016

Life goes on after May 9. Whoever wins, we, as citizens, have to be the change we wish to see in this country. #PiliPinasDebates2016