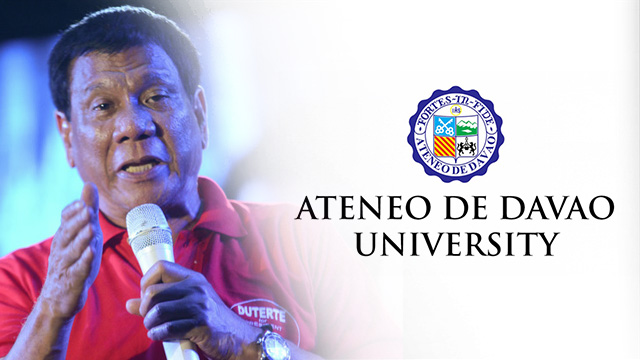 Duterte is favored by 88% of voters in Davao City, where he served as mayor for nearly two decades. The percentages of other candidates were irrelevant, ranging from less than 1% to a little over 1% – lower than 6% of voters who remained undecided on their candidate.

Indecision on the choice for vice presidential candidate was at 15.7%.

AdDU-URC added, however, that  29.8% of the total number of respondents didn’t indicate any preferred senatorial candidate.

The poll showed the top choices for the 3 congressional districts in Davao City:

With a percentage of 95.2%, former city mayor Sarah Duterte is the most favored mayoral candidate in Davao City.

Re-electionist Vice Mayor Paolo Duterte, who is unopposed, got 83.47%.

For the district councilors, these were the results (in order):

“Despite the chaos and controversies that this elections have, the respondents and voters are all interested equally to both local and national elections,” Lourdesita Chan, one of the researchers, said of the results.

In the most recent SWS survey released on Monday, Duterte pulled ahead of his rivals for the presidency with a voter preference rating of 33%. The survey was conducted from April 18 to 20 among 1,800 registered voters nationwide, or during the time Duterte’s controversial rape remark went viral. – Rappler.com

A recent graduate of the University of Immaculate Conception in Davao, Lira Valderama is one of Rappler’s lead Mover in the Davao region.