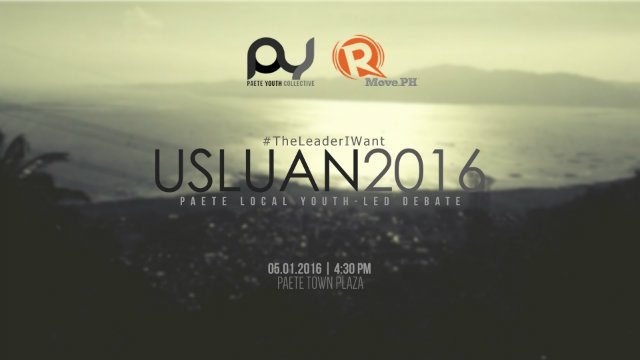 Facebook Twitter Copy URL
Copied
Join us on Sunday, May 1, from 4PM onwards at the Paete Town Plaza!

LAGUNA, Philippines – Local candidates in the “Carving Capital of the Philippines” will go face to face in a debate at the Paete Town Plaza on Sunday, May 1.

Paete Youth Collective, a local youth-oriented organization that believes in the capacity of the youth to shape the future and direct the course of society, partnered with Rappler’s civic engagement arm, MovePH, to organize “Usluan 2016: Paete Local Youth-Led Debate.”

The debate will give chance to the public to get to know their candidates better and will tackle local issues in Paete. Usluan 2016 is part of Rappler’s #TheLeaderIWant series, which hopes to help voters define the qualities of the leaders the country needs.

Congressional candidates and local councilors will face off during the first part of the debate from 4:30 PM to 6 PM. Mayoral and vice mayoral candidates will meet from 7:30 PM onwards.

Paete mayoral candidates Rojilyn Bagabaldo of the United Nationalist Alliance (UNA) and Arcel Cadayona of the Nationalist Peopl’s Coalition (NPC) are in their second go as contenders for the position. Bagabaldo of UNA got 6,708 votes while Cadayona had 4,367 during the 2013 elections. (READ: #PHVote issues, fast facts, and candidate page for Paete, Laguna)

In 2013, UNA’s Emilio Ramon “ER” Ejercito won the gubernatorial race in Laguna with 566,325 votes against Liberal Party candidate Egay San Luis. Ejercito, in the first year of his second term, eventually stepped down from Laguna capitol due to his campaign overspending case.

Join us in looking for #TheLeaderWeWant in Paete, Laguna! – Rappler.com