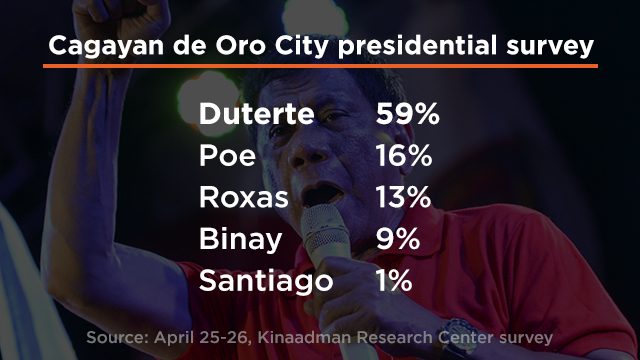 The tough-talking Duterte got 59% of polled voters, up from 48% in the first KRC survey conducted on the second week of March. (READ: Duterte leads in CDO – Xavier University survey)

The most recent survey was conducted from April 25-26, after the last presidential debate in Pangasinan. It polled 1,000 registered voters (473 from District 1 and 527 from District 2) in the city, 18 years old and above and with biometrics.

Trailing behind Duterte is independent candidate Senator Grace Poe with 16%, down from her previous 19%. She is in a statistical tie with Liberal Party standard-bearer Manuel Roxas II who improved only by 1% to 13%.

The survey’s margin of error for the presidential race is pegged at ±3.0 percentage points at 95% confidence level.

Read the to-fix lists of the 5 presidential bets:

Second highest seat in the land

For the vice presidency, Leni Robredo (LP) is in a statistical tie with Senator Ferdinand “Bongbong” Marcos Jr with each candidate getting 28% of the polled voters.

A look at the results also revealed Robredo improved significantly from 17% in the previous survey to 28%. On the other hand, Marcos inched up to 28% from 21%.

Duterte’s VP bet Alan Peter Cayetano remains in third place with 22%. Francis Escudero fell significantly from 21% to 11%, setting him in fourth place. Gringo Honasan ranks fifth with 4% and Antonio Trillanes is last with 2%.

The margin of error for the VP race is ±2.8 percentage points at 95% confidence level.

Fully funded by Xavier University, the second and last 2016 elections survey of KRC used a systematic random sampling in the selection of households.

The first survey transpired on March 12 to 16, after the first presidential debate was held at Capitol University in CDO on February 21, polling 800 proportionally distributed respondents from the two districts, also using a systematic random sampling method.

Dubbed “City of Golden Friendship,” the capital city of Misamis Oriental, has 305,321 registered voters for the May 2016 elections.

Known as the “Gateway to Northern Mindanao,” the vote-rich CDO boasted an 80.61% voter turnout in 2013 elections.

According to Numbeo, the world’s largest database of user-contributed data about cities and countries worldwide, CDO ranks 8th safest city in the Southeast Asia.

CDO also serves as the regional center and central business hub of Region X or Northern Mindanao, the second most vote-rich region in Mindanao with 2.46 million registered voters.

Davao City Mayor Rodrigo Duterte maintained the solo lead in the latest ABS-CBN survey at the time the candidate was accused of not declaring a bank account that contained hundreds of millions in deposits.

Robredo and  Marcos also topped the same survey conducted from April 26 to 29.  – Rappler.com

Rappler’s Lead Mover in Cagayan de Oro City, Stephen Pedroza is a graduate of Development Journalism at Xavier University – Ateneo de Cagayan. He attended a course on new media in journalism at the Ball State University in Muncie, Indiana.