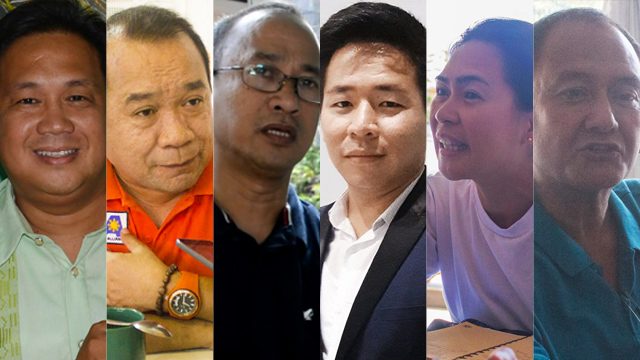 ILOILO CITY, Philippines – A barangay captain, a lawyer, a young professional, a government employee, a career politician – they come from different walks of life, but they share the same goal: to raise the flags of their presidential bets in Iloilo City.

They are the ardent supporters of the candidates on the ground, far from the political plots and counterplots at the highest rung of campaigns. They raise the colors and banners of their bets, tirelessly convincing voters to join their respective camps.

Often lacking in resources but never in passion, they take on the challenge of personally representing their candidates in communities.

Jonas Billosillo has seen this city’s growth in the past 6 years under the current administration, and he hopes that Iloilo will continue to tread the “Daang Matuwid”.

This is why he supports the presidential bid of Mar Roxas, Billosillo said, noting that he’s not going to squander such progress in his hometown by supporting another candidate. The growth of Iloilo, according to Billosillo, is promising under Daang Matuwid. “Secretary Mar is an Ilonggo – he’s from Capiz. Secondly, he has no record of corruption. Out of all the other candidates, you can really see, his record is unblemished. Thirdly, he has all the requirements needed by a presidential bet,  and is far more qualified than some of the other presidential candidates,” said Billosillo in Hiligaynon.

Billosillo, a former barangay kagawad and barangay captain, has always been passionate about organizing citizen groups at the grassroots level. He said he is proud of steering Roxas‘ campaign across 180 baranggays in Iloilo.

“We help the citizens understand why we need to support the Liberal Party – the importance of helping the candidacy of secretary Mar and the programs he’ll implement if he wins,” shared Billosillo.

Most would assume his team, which is funded by LP under Treñas’ office, has an unlimited war chest, but Billosillo denied this, claiming that they strictly follow the campaign finance guidelines set by the Comelec.

Iloilo is considered a stronghold of the ruling LP. Majority of the city’s and province’s government seats are occupied by Team Daang Matuwid (Straight Path).

Davao City Mayor Rodrigo Duterte’s camp recently dealt a hard blow to LP’s claim that Iloilo is its bailiwick, mobilizing 7,000 supporters to a rally at the Lapaz Public Plaza on April 19.

The success of the event has been credited to the volunteerism of Ilonggos, a big feat achieved and fueled by contributions from private individuals and organizations believing in the change promised by Duterte. “You will be amazed with the volunteers, you can really see their enthusiasm,” said lawyer Hansel Didulo, the regional political officer of the R6 Alliance for Federalism, one of the Duterte support groups in the region.

“As a lawyer, I base on evidence and of all candidates, Mayor Duterte has his Exhibit A – Davao,” shared Dedulo.

“I always remember the words – judge a person by his deeds, not by his words”.

What drew Didulo to Duterte even more is the fact that the presidential bet is an ardent nationalist.

“When you join Duterte, you manifest a love for the country. Have you noticed that at every rally he’s holding the Philippine flag? There’s no money in this campaign, it’s all pure volunteerism,” he added.

Aside from distributing tarps and fliers, Didulo and his team organized Voter’s Education events to campaign for Duterte. Funded mainly by volunteers, with campaign materials coming from Davao City, they organized the Lapaz Rally and were overwhelmed by the astounding turnout.

Didulo himself was surprised by the crowd numbering in the thousands.

“They were all volunteers. Our prior goal was to speak before University of the Philippines Visayas students. We expected harassment, difficulty in securing permits or even gathering a sizeable crowd. I was really surprised by the turn out considering that Iloilo is considered an LP country.”

But there were hurdles they had to overcome like logistical constraints and factions among their supporters.

“We have to harmonize the group all over Panay. You have to deal with egos, personalities, not to mention their personal agendas,” Didulo said.

They also had to unify their supporters in Antique. “You could really feel the tension because one of the organizations wanted to be Duterte’s exclusive party, but that can’t be done, because Duterte is for the people,” the lawyer narrated in Hiligaynon.

In the end, it was Duterte’s message of change that united them. What separates Duterte from his rivals is his call, Didulo said.

“I expect him to fulfill what he promised. And I believe he is a guy that can deliver. We need a president who is a doer, not a talker,” said Didulo.

“Drastic change in the administration, our government is like an old car, it won’t be fixed by just fine-tuning, you have to replace the engine. Change – expect it under Duterte.”

The numerous accusations piled at the foot of Jejomar Binay did nothing to stop incumbent Iloilo City Councilor Joshua Alim to proudly support the vice president’s presidential bid.

The councilor firmly believes the allegations are mere black propaganda from the former Makati mayor’s political rivals, aiming to tarnish the name of the former front runner in the polls. “He came from poverty, just like me. But he didn’t let his situation get the best of him and he strived to be successful. For me, I don’t believe that he’s that corrupt as claimed by his opponent,” Alim expressed in Hiligaynon.

“I really believe in his platform of government and the way he (transformed) Makati from a 5th class municipality to what Makati is now.”

The councilor also helped Binay during his vice presidential campaign.

“He’s a very simple man and very down to earth. If you know him up close and personal, certainly, you will believe the man. I’m not saying that he’s a perfect man or a perfect public servant, but, among those running, he’s the most qualified.  Education, academic wise, he’s very different. In terms of performance, what the other candidates are still planning, he’s already made possible in Makati,” shared Alim.

Alim admitted that the hardest part of being Binay’s campaign manager is the lack of resources. The city councilor shared that he had to spend and use his personal money just to organize and mobilize the Friends of Binay (FOB), a community of the VP’s supporters in the city.

“What we do, we just campaign hard. They won’t be able to take down or vandalize what we’ve already shared personally to the people,” Alim said.

The FOB has had to campaign on the streets and conduct house-to-house visits because they often encounter difficulties securing permits to use gyms and public spaces.

Alim shared that they attempted to hold a rally at the Lapaz Plaza but when their staff started processing permits for the event, too many documents were required by the local government. This forced Binay to cancel the rally, leaving his supporters disheartened.

Alim is confident and optimistic that they can gather enough votes for the vice president.

“Maybe we’ll lose, but we will not just serve it (victory) to them on a silver platter. We’ll fight this out and were confident that we can make it,” the city councilor said.

Enduring the summer heat, 84-year-old Manuel Ignacio carries the campaign posters of presidential candidate Senator Grace Poe. Despite his age, Ignacio manages to bring the posters to as many houses he could visit. He is hoping his fellow Ilonggos would also vote for the candidate he is rooting for. Ignacio is only one of the many Ilonggos who signed up for the “Galing at Puso” campaign.

“The campaign is doing good. We had a lot of volunteers coming from all sectors. We will be doing our campaign independently because Grace Poe and Chiz Escudero are independent,” said Ray Rico, a barangay captain in Iloilo City.

Despite having very limited funds at their disposal, Rico shared they were able to push through with their activities with the help of donors. Volunteers have also pitched in to show their commitment to the leader that has inspired them.

“I could see in her what the Filipino nation needs. She’s honest, sincere, may galing at puso. I see in her the traits of a good leader, that’s why she deserves to be the next president of the Philippines,” Rico said in Hiligaynon.

Betsie “Twinkle” May Causing, another head of the Grace Poe Volunteer team, added that Poe is the right candidate because her programs aim not only to combat drugs, criminality, and corruption, but also to improve agriculture, health, and the economy.

She also noted that her candidate respects human rights and due process.

The volunteers urged Ilonggos to choose Poe because she is one of their own.

Grace Poe is an adopted child of Iloilo, but she is just one of the 3 candidates banking on their Ilonggo roots to clinch the province’s vote.

Mark Aranduque was 3 years old when his grandmother, a fan of Miriam Defensor-Santiago, took him along with his mother and siblings, to distribute senator’s campaign leaflets. Santiago, lost her first presidential bid. Miriam ran again in 1998, but suffered the same fate.

In 2015, Aranduque gathered a group of young professionals and volunteers, founding the People’s Reform Coalition and launched the first Ilonggo campaign for the veteran senator. As the elections approached, Aranduque and his fellow volunteers faced more serious difficulties. Before committing to the campaign, they were conscious of the fact that they lacked resources and lagged behind other bigger parties.

Aranduque said that their campaign funds mainly came from their own pockets, and they have less than P 5,000 left.

Recently, after vice presidential bet Bongbong Marcos’ sortie in Iloilo, they found their limited campaign posters and tarpaulins removed or torn down. A fake volunteer even asked for campaign materials and ran off with them without leaving any trace.

They talked to some organizations in Iloilo but they’ve been repeatedly rejected because of the rumors that Santiago’s health is failing as she continues to battle her illness. But they carried on.

Through word of mouth, they tirelessly reminded voters about the senator’s capabilities and strengths as a feisty, intelligent legislator.

For Aranduque, Santiago’s most admirable trait is her honesty.

When Aranduque first met the senator, he said that he wanted to hug her.

“I wanted to apologize because the Filipinos failed her. They didn’t value her service and we don’t deserve any more of that. Some people would state things against her easily because they don’t know her,” he said.

When asked about his expectations if Santiago wins, Aranduque answered “None”, noting that the senator has served the country well.

“With Senator Santiago as president, I imagine the country with people who are united. People will only do what is right. No profanities will be heard. Politicians will not resort to extrajudicial killings. No one would complain much,” said Aranduque.

He believes that the third-time may be the charm for a “Miriam win”.