May 11, 2016 1:15 AM PHT
Michael J. Bangoy Needham
Facebook Twitter Copy URL
Copied
'This is the Filipinos' chance to make things right. We have our misgivings about this man, but I challenge everyone to look at the opportunity we have.' Most of you will read articles in the media calling Davao City Mayor Rodrigo Duterte a “fascist,” “punisher,” or “dictator.” Some have even called the Filipino people “dumb” for even considering voting for him.

It is completely understandable to be shocked and appalled at some of the things he has said, such as his death threats to criminals, and his seeming disregard for due process.

You are probably wondering: how has this man amassed nearly double the number of votes compared to his closest rival? Why do so many Filipinos want this man to lead their country?

Duterte has promised very basic but necessary changes in security and well-being for the Filipino people.

Criticize his ways, but he has done effective governance in his bailiwick – my hometown, Davao City – part of the often neglected southern Philippines. His most active supporters recognize this and want the whole nation to benefit.

I am not going to defend anything he has said. I am just going to ask you to adjust your perspective. 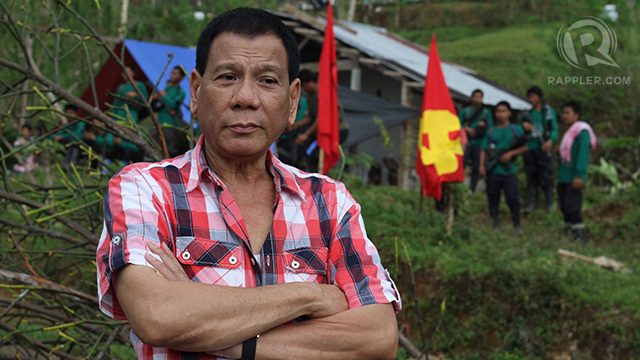 The Philippines is a poor nation. A third of the population is below the poverty line. Filipinos have been subjected to inefficient and ineffective governance the past decades. Now, they want change.

To illustrate, imagine that you are a Filipino citizen.

First scenario: There’s a 1 in 3 chance that you fall below the poverty line, and of those of you below the poverty line, only 4% of you will make it to college. Among the 4%, you are most likely only to study a vocational degree instead of an undergraduate course. We, as students in the UK, are able to study what we want to study. In the Philippines, you study what will earn you a salary straight out of college.

Second scenario: If you’re part of the 2 out of 3 not living in poverty, you are more likely to have one or more close family members – including your parents – working abroad. There’s a chance that your aunts, uncles, grandparents, or even siblings are the ones raising you. Your parents and/or close family simply send you money from abroad, where they are most likely to be working as domestic workers, musicians in a hotel lobby or cruise ship, or as part of the care home system for the elderly or disabled.

The Philippines has its share of peace and security problems, too. You will most probably encounter petty crimes, such as theft or pickpocketing, and even worse, a more serious crime such as rape, assault, or grievous bodily harm. Local police tend to be open to bribes, and even if they aren’t, your judges probably are.

So what? There are obviously countries much poorer than the Philippines, but for a nation whose economy grew 5.8% last year, the wealth being generated is definitely not being redistributed. There is much concentration of wealth on top and the inequality gap is growing. Thus, the protests over the seeming apathy of the government especially in emergencies and disasters.

What I have explained above are the genuine problems that the everyday Filipino citizen faces. They are unconcerned about Duterte’s punishing style or death threats to criminals. Liberal ideals are irrelevant when it would take you 120 days to save up for an iPhone, a luxury that I and many of you reading this are enjoying. 120 days of saving up is assuming you or your kids don’t eat and don’t drink, or that you do not have any family to support. But don’t take your phone outside, someone will probably pickpocket it the second you step onto the streets. My friends, let us view Duterte’s presidency as a change of regime. Tired of the usual paradigm where the oligarchs and the ruling elite play the cards for the largely poor country, the Filipino people have resoundingly said no more. Let us view this as not the end of democracy but a start, a renewal of people power. We now have an electorate that has involved itself in the democratic exercise of voting with an overwhelming 81% participating in the elections.

This is the Filipinos’ chance to make things right. We have our misgivings about this man, but I challenge everyone to look at the opportunity we have. The systems have changed, the old ways of campaigns and suasions have changed. We now have a new paradigm where Filipinos can work together as one. Criticize Duterte if you want, but the Philippines needs all the support it can get as it treads its path to development.

Finally, I would like to say, for someone’s motivation of choice for a candidate to be “legitimate,” it does not have to correspond to the same concerns and values that we hold in a completely different country.

We are lucky to have these ideals, values and (lack of) concerns, but as citizens of a developed country, we cannot question the fundamental concerns for security and standard of living which Filipinos have expressed by electing Rodrigo Duterte. Excuse me, I meant President Rodrigo Duterte. – Rappler.com

Michael J. Bangoy Needham is a Filipino-British student and athlete from the London School of Economics and Political Science. You may contact him via e-mail: michaeljamesneedham@gmail.com.