Why Cebuanos love this LTO employee 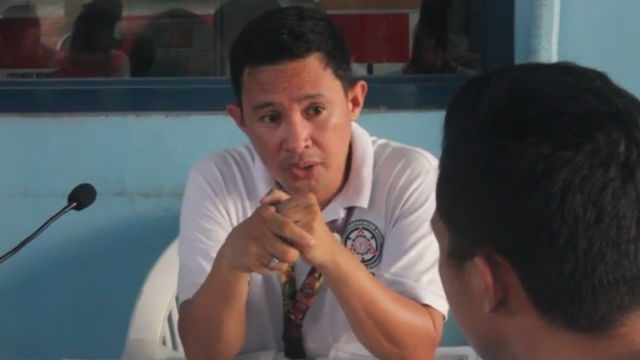 Facebook Twitter Copy URL
Copied
'I do things fast because I know that people don’t want to be delayed. While I’m entertaining the complaint of one person, I’m also paying attention to another complaint,' says Winifredo Miro, a model civil servant

CEBU CITY, Philippines – In the Philippines, poor service is often the expectation when you go to government offices. But at the Land Transportation Office (LTO) in Cebu City, a netizen took notice of an employee who went far beyond that expectation.

“He opened his desk ahead of time and he is gladly addressing the concerns of license applicants,” Moses Abraham Pasco said in the caption of a photo sent to Top Gear Philippines’ Facebook page.

“And despite the heat, he smiles and works really fast. At one point when a female applicant’s last name was Robredo, he playfully greeted her, ‘Good morning, Madam Vice President,’ eliciting a good laugh from those nearby.”

(It’s okay to wait in line if you can see that your papers are being processed. We salute you, Sir! Thank you for your service.)

The man in the post, Winifredo Miro, told Rappler he was “happy” but also “embarrassed” that his photo went viral.

“I love my job. The reason why I’m inspired to work is because I have a family. I have a family to support and that’s why I’m doing what my job requires me to do,” Miro said.

Miro has been working in government for over 17 years and has also served as barangay councilor of Ermita in Cebu City. Before that, he was part of the Sanggunian Kabataan (youth council).

A sign that reads, “No license card available,” hung over Miro’s head.

For several months, the LTO has been unable to issue permanent licenses due to a court order stopping the P-366 million supply deal between the transportation office and the manufacturer of the cards. The LTO also faced problems releasing new license plates on time, after the Commission on Audit asked the LTO to stop payment to the supplier of new plates, and when the plates were abandoned and stuck at the Port of Manila.

According to a 2015 Social Weather Stations (SWS) survey, the LTO ranked as the second-most corrupt government office, as perceived by business owners.

Despite these problems, however, Miro continued to keep a positive attitude. While he didn’t deny that there might be corruption in the agency where he worked, he said that he was focused on making sure that he would not contribute to the problem.

“We just do what we should do,” he said.

His philosophy at work is to prioritize the needs of motorists, and to work as fast as possible. “Honestly, the space I occupy is really hot especially in the morning. I can’t use the electric fan because the priority are the clients so the fan should face them,” Miro said.

Miro, who works at the public assistance and complaints desk, said he has learned to handle the stress that comes with it. “There used to be two people on the desk but when I arrived, I was alone,” Miro explained. “That’s why, as you notice, I work two jobs at once. I do things fast because I know that people don’t want to be delayed. While I’m entertaining the complaint of one person, I’m also paying attention to another complaint.”

Miro, who was recognized as an outstanding youth leader in 2003, said that customers can do their part to help curb corruption and improve the agency by not going to fixers. “Go straight to the LTO and ask,” he said.

To all government employees, he had this message: “If you can do anything for the good of the department, do it even if we get reprimanded. Let’s just do what we have to do for the good of our department.” – Rappler.com

Jensen Floren is a Rappler intern and Mover.