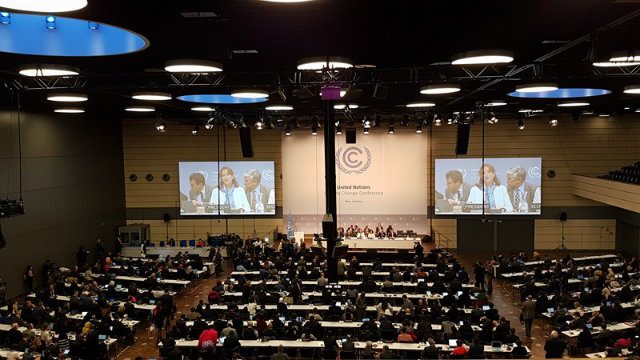 Facebook Twitter Copy URL
Copied
The Philippines current commitments include 70% carbon mitigation by 2030. All of these commitments, however, are conditional.

BONN, Germany – The Philippines announced on Wednesday, May 18, during the third day of climate negotiations that it will review and revise its Nationally Determined Contributions (NDC) to align better with the 1.5-degree target.

The Philippines, as chair of the Climate Vulnerable Forum, called for more radical action from other countries to ensure that the world does not warm higher than 1.5 degrees Celsius from pre-industrial levels, citing its efforts in revising its commitments as an example which other countries should follow.

“We would like to submit a new NDC which is more substantive in terms of mitigation options, with more inputs from the major sectors like energy, transportation, industry, waste, agriculture, forestry, etc,” said Emmanuel de Guzman, lead negotiator for the Philippines and commissioner of the Climate Change Commission.

He said that the revised commitments will remain ambitious and that this time, they are consulting local government units and local communities.

“Before it was only the sectors at the national level, but now we would like to consult also the LGUs, small and medium enterprises, private business in the communities because eventually they will have to be involved in climate action at the local level. So they have to be aware of the Paris agreement, the requirements of the agreement, and they will have to also revisit their business models and how they can support a low carbon development pathway,” he added.

Last year, sectors were dissatisfied with the formulation of these commitments which lacked transparency and excluded many sectors and civil society organizations.

Aksyon Klima, a network of 40 civil society organizations in the Philippines working for climate action, said at that time, “There was no real consultation that happened that included Civil Society Organizations (CSOs).”

The Philippines’ current commitments include 70% carbon mitigation by 2030. All of these commitments are conditional, which means that it is hinged largely on finance that will be given by other countries.

Environmentalists have criticized this commitment, saying that the country must commit to mitigation whether or not financial assistance will be given.

Asked whether the new commitments will have an unconditional commitment, De Guzman said that they are still looking into it.

“What we offer as conditional speaks of our intention to welcome any partnership, any support from the international community, from donors, from generous countries to support our implementation of NDC,” he said.

While the Philippine commitments point toward 70% mitigation, the country continues to invest in coal power plants for its energy needs.

According to De Guzman, the government plans to embark on a national energy policy review which will be done through a whole of nation approach.

“All the important sectors in the energy sector will be consulted and examine very well where the inconsistencies in our policies are, where the regulatory loopholes are. Based on this, we will come up with a policy development framework for energy which will be the basis for any executive and legislative action,” he said.

According to Climate Analytics, current policies will allow the planet to warm at 3.3-3.8 degrees Celsius and current pledges will warm the planet to 2.5-2.7 degrees. The current level of pledges is not compatible with either 1.5- or even a 2-degree target.

There is a significant difference between 1.5 and 2 degrees of warming.

But climate scientist Bill Hare remains optimistic, saying that a 1.5 pathway is “not easy but technically and economically feasible.” – Rappler.com

Renee Juliene Karunungan, 25, is the advocacy director of Dakila. Dakila has been campaigning for climate justice since 2009. She is also a climate tracker for Adopt A Negotiator.