May 24, 2016 1:40 PM PHT
Facebook Twitter Copy URL
Copied
During the sacred ritual which sought forgiveness from the tribes' ancestors for the disrespect of Mt Apo, North Cotabato 2nd District Representative Nancy Catamco is named a Diwata or protector 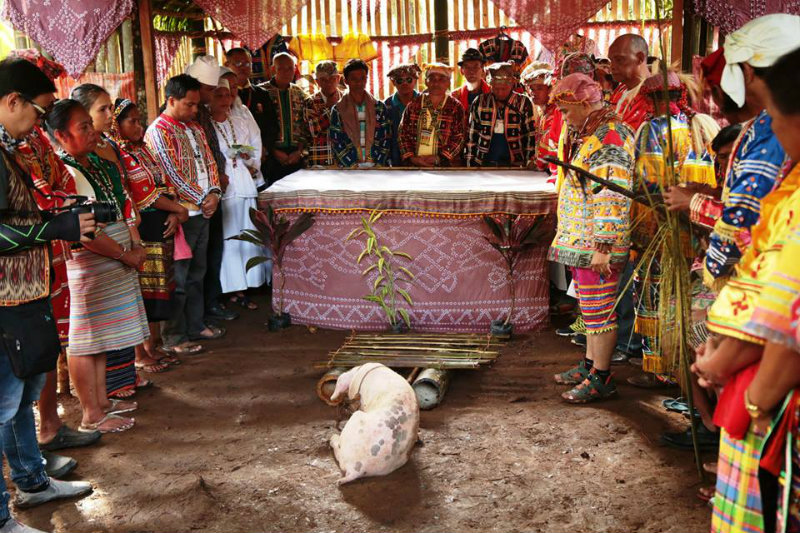 KIDAPAWAN CITY, Philippines – It was an hour before the sun shined on Friday, May 20, when spiritual and tribal elders from the 8 ethnic groups living around Mount Apo joined forces to save their sacred land which they call Apo Sandawa.

They held Panuvaran, the spiritual ritual for appeasement and offering for cleansing for their ancestors.

Lake Agco, the boiling lake at the foothills of Mt Apo, was wrapped with clouds, and the only sounds heard were that of the boiling lake, chirping birds, and cascading waters. (READ: Renewal through Lake Agco)

The Ponuvad to Kosunayan to Apo Sandawa or a Prayer for the Appeasement of Apo Sandawa is a cultural ritual of indigenous peoples (IPs) that seeks the conciliation with the spirit of the tribes’ ancestors guarding and living there.

In a secluded place, Bai Magdalena Suhat, a Walyan (spiritual doctor) together with two spiritual leaders, led the ritual. They brought their Diwata, incumbent and incoming North Cotabato 2nd District Representative Nancy Catamco, to the sacred place where a small well with crystal clear water can be found.

With their hands filled with pure water, they drenched Catamco, who was clad in an all-white dress, as they prayed before their ancestors. The group was facing the boiling lake, surrounded by century-old trees and covered by fully-vegetated hedge plants.

Holding the sacred Panuvaran at Lake Agco was their way of asking forgiveness from their gods and ancestors whom they believe have been disrespected by the  “conquerors” or those who came to the mountain and disregarded their culture.

They believe the recent 9-day fire, which damaged over 300 hectares of Mt. Apo, was a strong message from ancestors. Considered the highest peak in the country with an elevation of 2,954 meters, Mt Apo is one of the Philippines’ favorite tourist destinations. It is located 40 kilometers from Davao City and 20 kilometers from Kidapawan City.

“The place should be preserved and respected,” Leah Labrador, a spiritual leader, said. 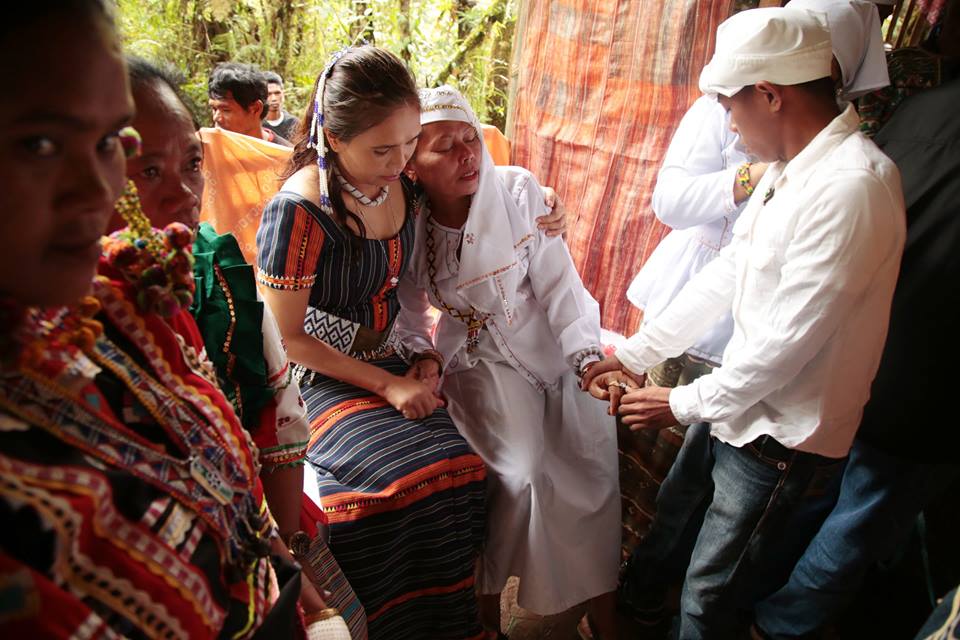 The Panuvaran ritual highlighted the “bathing” of the person whom the tribe regards as diwata. For this ritual, it was Catamaco who was born to Ovu-Manovu parents.

After the “cleansing” ritual, the spiritual leaders along with the two women elders proceeded to the Panuvaran – or the place for prayer – to start the offering to the altars which they call Sapat to Tomba’a.

On her way to Panuvaran, a barefooted Catamco walked in the middle of the bushes leading to a native hut where about 425 tribesmen waited to formally confer her as their Diwata.

The beatings of the indigenous agong became more deliberate and tribal instruments played as she arrived in the hut.

When everyone settled in, a white hog and chicken together with baskets of fruits were offered. One of the spiritual leaders, Walyan Lipatuan Veloso Suhat lectured on the importance of preserving the sacred mountain.

“I am happy you remembered us by offering your prayers and your fruits. But you must remember, our land needs to be respected and protected. People come to our lands without showing respect to us. We are here watching everyone, the fire which you witnessed was a message of anger,” Labrador, who interpreted the Manobo lecture to Rappler, emphasized.

Considering and proclaiming Catamco as their diwata went through a very meticulous procedure, according to Labrador.

“We do not just name anyone our diwata because that is a sacred name to us. But we see in Catamco a forgiving leader, a woman who understands us and who is there to fight and protect the tribe. She understands us and leads us. She will never abandoned her tribe despite the status she has now, so the elders conferred her diwata,” she said.

Lipatuan Veloso Suhat, a traditional IP Leader, said naming someone diwata is anchored to the indigenous tradition and cultures in picking leaders.

“We do not doubt, Apo Sandawa and the spirit of our ancestors dwell in her (Catamco) to serve as a visible and corporeal Diwata – the overseer and keeper of the tribe”, Lipatuan said.

What called the attention of most tribal elders, according to Suhat, was Catamco’s deep and good judgment for the tribe.

“She was talking the way how our ancestor speaks, bottomless words would just come out from her mouth and it strikes through the heart of the tribes,” he added.

“With all of my heart, I will accept this extraordinary mission you have put on my shoulder. I will stand for the tribes as long as I live,” Catamco said in her native language as she accepted the tribes’ declaration. (READ: Did lawmaker call Lumad evacuees ‘stinky’?)

She added that she will continue her great battle in Congress to ensure the creation of an IP department under the office of the President, to be called as the Department of Indigenous Peoples.

For Catamco, the presence of tribal elders from North Cotabato, Davao and Bukidnon provinces that gathered at the foot of Mt Apo is proof that IPs are still intact.

Datu Luis Lambac of Davao City said Catamco’s conferral is a message to the tribal communities that they are one and they will be behind her.

A coordination meeting  with various tourism councils within the Mt Apo range has been scheduled, seeking to inform every local government unit that climbers should be educated and briefed about the sacred land before they are allowed to trek.

“We are not anti-tourism, but we only have one Mt Apo. It is our sacred land, respect is due,” Catamco said. – Rappler.com