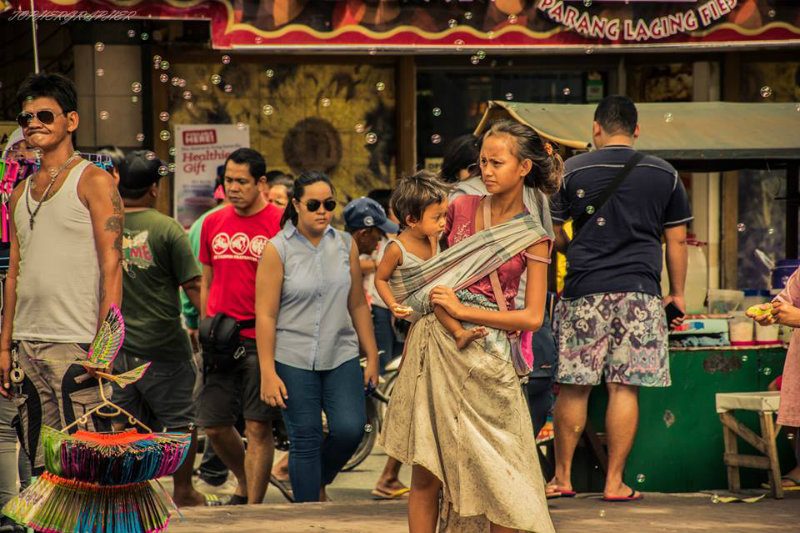 While locals of Lucban, Quezon celebrated the feast of San Isidro or the Pahiyas Festival on May 15, netizens found a new Internet sensation from the town. Topher Burgos, a local photographer, captured with his shutter the true Filipina beauty of 13-year old Rita Gabiola, dubbed as the “Badjao Girl.”

Burgos told Rappler that they were taking a walk in Lucban when they saw Gabiola begging for coins in the street.

Photos of Gabiola went viral in just few hours after Burgos posted it on Facebook. Because of her morena complexion and her high cheekbones, netizens shared the album and captioned it with “the next Beauty Queen.”

“May potential kasi talaga yung bata. Kaya hindi ako tumigil ng paghingi ng mga tulong sa mga tao, kasi nalaman na namin ang sitwasyon nila,” Burgos said. (She has the potential. That is why I did not stop asking help from people – especially when we learned more about their plight.”

According to Burgos, Gabiola dreams of becoming a teacher someday. She wanted to help her family and her community rise from poverty. Gabiola is the second of 6 children ad their family lives off her father’s fishing.

The Badjao has become an infamous term for the indigenous group Sama Dilaut in the Philippines. They are often depicted as beggars in the metro, buses, and feasts. (READ: Plight of Badjao: Forgotten, nameless, faceless)

After Burgos’ first visit to Gabiola’s family, help from kind-hearted strangers immediately poured in. Gabiola’s family said that they were shocked by the support they received.

(They were surprised at the sudden fame of their daughter and they gave thanks, I told them that many would help them, and their community.)

How can you help?

According to Burgos, Gabiola needs clothes for everyday use, uniform, school shoes and slippers, foods, medicines for her parents, beddings and lights. She also asked help for her community as well.

Benzar Gadzali, the local Badjao leader, said that there are 367 Badjaos in Gaviola’s village, and it has more than 50 Badjao children enrolled in elementary and high school.

He also said that they were receiving support from the local government through different projects, but they are hopeful to get fishing boats and gears to help the community with their livelihood.

The new social media sensation continues to get more attention and support from different groups. For Gabiola, she hopes the attention will help her achieve her dreams and help her community.  – Rappler.com

For those who wants to help Rita Gabiola and her community, you can contact Topher Burgos or Evelyn Ana.

Abigail Abigan is the Lead Mover in Laguna and Quezon.