All the videos you need to prepare for earthquakes 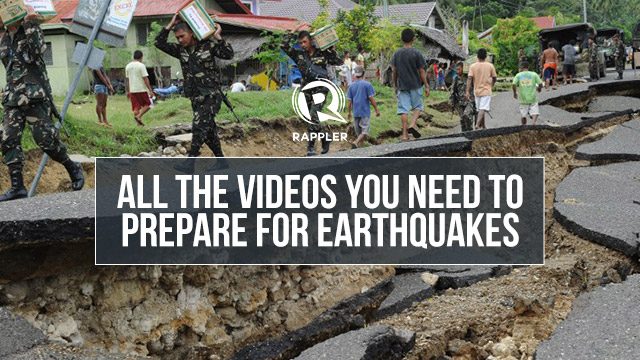 Facebook Twitter Copy URL
Copied
Here's a compilation of all earthquake-related videos on Agos powered by eBayanihan, ranging from basic information on hazards, to tips on what to do before, during and after an earthquake

MANILA, Philippines – The Philippines is one of the top hazard-prone countries on Earth, and its location in the Pacific Ring of Fire makes it a special target. Eight out of 10 of the world’s most disaster-prone cities are located in the Philippines.

To help educate the public in time for the National Simultaneous Earthquake Drill and the Metro Manila ShakeDrill, Rappler compiles this list of videos.

What are people doing to prepare?

#RapplerTalk: Disaster preparedness in the age of social media

Are schools in the Philippines earthquake-proof?

#MMShakeDrill: Preparing for the Big One

How have cities prepared their residents?

Is Manila prepared for an earthquake?

How have other parts of the Philippines endured earthquakes?

Tagbilaran bishop to earthquake survivors: You haven’t been abandoned

CCTV footage of the 2013 Bohol earthquake

Cardinal Tagle after the earthquake: Rebuild the Church

Learn more about the #MMShakeDrill by clicking the link below: