The SimpleWave: When technology meets purpose Facebook Twitter Copy URL
Copied
The SimpleWave is a smart device that can save elderly people's lives. Its developer, Angelo Umali, is one of our speakers at ThinkPH 2016

MANILA, Philippines – What is technology if not a means to provide peace of mind? That’s how tech entrepreneur Angelo Umali sees it.

While he was a student at Philippine Science High School, Angelo Umali already had an acute understanding of the potential of technology. “We wanted to use science to improve the Philippines,” he recounts at the APEC 2015 SME Summit. And so that’s what he set forth to do.

Initially, he dreamed of becoming a doctor, but was persuaded by his father to take on a different path. So at 15 years old, Angelo went on to pursue a degree in BS Electrical Engineering at the University of California Los Angeles (UCLA), and then a Masters Degree in Electrical Engineering from Stanford University – experiences that eventually led up to where he is today. Today, Angelo Umali is the CEO and founder of Simple Wearables, a healthcare tech startup based in Hong Kong that specializes in wearable technology.

Before founding Simple Wearables, Angelo promised himself that “If I was going to dedicate the next part of my life, I wanted to solve a big problem. I wanted to make a big impact. Then came the tragedy that gave purpose to my passion.”

That particular tragedy is when his grandmother who lived in the US fell and hit her head. They hadn’t known at the time, but the fall caused her to develop a blood clot in her brain. She died 3 days later

Just like Angelo’s grandmother, around 270 million people over the age of 60 experience fall-related accidents every year. Two-thirds of these casualties have a chance of happening again within the next 6 months. For elders, falls can result in shortened life spans, symptoms of post-fall syndrome such as immobilization and depression, and even financial strain due to frequent hospitalization. A fall is crippling in more ways than one.

It is this reality that inspired Angelo to develop the SimpleWave: a wearable device that can determine the movements of its wearer, so that in the event of a fall, it will immediately send an alert to its wearer’s emergency contacts.

This differs from typical medical alert systems since the button doesn’t need to be pressed for the alert to go off. After all, once a fall has occurred, the wearer may not be able to manually call for help. The SimpleWave automatically detects the fall.

Watch the testimonials in this video:

The SimpleWave is a useful product for the elderly. It grants them a form of independence while also making sure they are safe. But the real disruptive potential of the SimpleWave lies in its potential to collect data for future medical innovations.

The device doesn’t just react to a fall, but gathers information to predict it as well. As the user wears the SimpleWave, his or her mobile patterns are collected and analyzed by the device. This could prove useful for other forms of wearable technology.

Hospitals are now looking at ways to offer remote healthcare services to their clients. Information collected by the SimpleWave can be accessed through cloud applications. Imagine the possibilities if hospitals and clinics could have access to such extensive and predictive data on their clients, most of whom are hard up to make regular travels to the hospital.

The SimpleWave is a good example of what happens when you mingle technology with purpose.

Angelo has one remaining elderly relative: his septuagenarian grandmother who lives in the Philippines. Even though Angelo’s far away and based in Hong Kong, he has peace of mind.

“Today, I see dots connecting,” he says. “My desire to become a doctor is now being fulfilled by technology.”

Hear more from Angelo’s story and be inspired to use a personal need to design your next disruptive business idea. Catch him as one of our guest speakers at ThinkPH 2016 on July 21 at the Newport Performing Arts Theater, Resorts World Manila, Pasay City.

Get your tickets now. – Rappler.com

Light meal and coffee will be served during the event 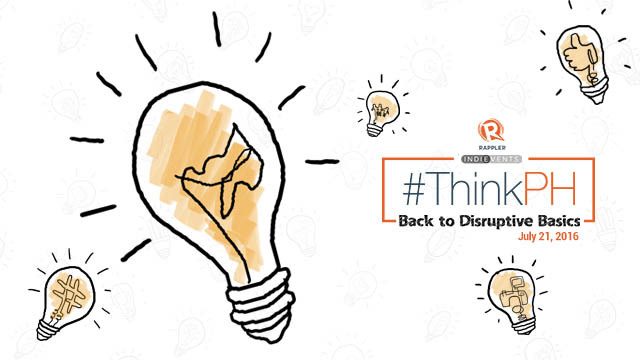