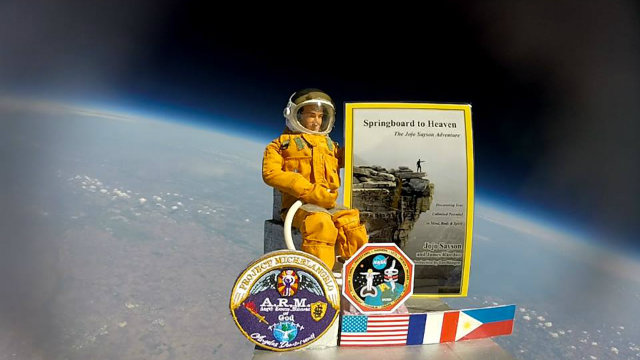 MANILA, Philippines – May 30 is Memorial Day, a federal holiday in the United States, but the day was made even more memorable by a little-known event that began at the Koerner Airport at Kankakee, Illinois.

At approximately 9:30 am (US time), “Astronaut Bob”, a miniature figurine, and replicas of the flags of the Philippines, France, and the United States of America and other items, were sent off to space as part of a High Altitude Balloon (HAB) Space Mission.

The objective of the mission was to launch “Astronaut Bob” to a height of 100,000 feet, and to successfully recover this package.

This launch was an initiative of Jojo Sayson, a Filipino physical therapist and a consultant and co-investigator for the National Aeronautics and Space Administration (NASA) Human Research Program at the University of California, San Diego.

“Today, May 30, 2016, the Lord allowed my heart to touch the sky. We reached space! There are so many people to thank and I shall do this in the following days to come. Remember that it is only with a passion so intense that you become a force of God to inspire many to ignite their many talents to make this world a better place to live in the galaxy.”

Intended to promote STEM (Science, Technology, Engineering and Mathematics) awareness in education, as well as a tribute to the victims of the Paris terror attack, the organizers of the event were able to capture a photo of Astronaut Bob at an altitude of 98,860 feet via GoPro. – Rappler.com