MANILA, Philippines – In spite of growing investor interest in the Philippines, many are discouraged from investing due to concerns over the prevalence of corruption and an uneven playing field.

Asif Ahmad, the British Ambassador to the Philippines, spoke to Maria Ressa on Friday, June 3, about how inclusive growth can be made more real for Filipinos through greater transparency and a level playing field.

Ahmad, who has spent more than a decade in Asia, said social media is especially powerful in making government procurement more transparent and open.

“We think that there is a market for using social media to improve government procurement and government expansion accountability is that, in the end, it is truly open. It is not something you request,  and you dig up, it is there by default,” said Ahmad.

He also said the speedy and transparent counting of votes resulted in a very peaceful election. In addition, ongoing reforms in Philippine anti-corruption institutions like the Office of the Ombudsman offer hope that the country can reduce the business risks due to corruption. 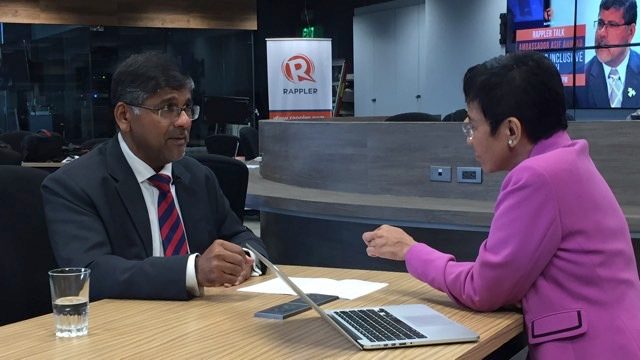 The prevalence of corruption in the Philippines is a key concern of British businesses who want to invest in the country.

The British government supports reforms to increase transparency and accountability by providing development aid to partner government and non-government orgranizations.

With the support of the British government, Rappler, through it’s civic engagement arm, MovePH, is building an online platform to crowdsource reports of corruption and other violations. The platform will serve as the catalyst for a more engaged and vigilant citizenry.

“I think people have now realized that you can channel that desire to lodge your protest or your view in a very different way,” said Ahmad.

The British government will also extend help to Rappler as it builds the platform by linking the organization with experts on corruption and technology.

In light of the change in leadership in the country, ambassador Ahmad said he is optimistic that the country will continue to grow and tackle the challenges it faces, in large part due to the widespread use of social media to keep a watchful eye on government.

“They call it civil society but this a digital civil society, people follow the issues. You’ve also managed to combine two things, which is in my view, quite unique, that you have a community, but you also have information being fed to that community. … So it’s not blind optimism. This is grounded on the best analysis that we can put our minds to,” said Ahmad. – Rappler.com