#MMShakeDrill: What happened in the north? Facebook Twitter Copy URL
Copied
How did responders from Quezon City – one of the areas which will be hardest hit should the West Valley Fault move – participate in the Metro Manila-wide earthquake drill?

MANILA, Philippines – At exactly 9 AM on Wednesday, June 22, a loud siren was heard around Quezon City Memorial Circle (QCMC), accompanied by makeshift sounds of the ground breaking, glasses shattering, and debris falling.

People in the area suddenly ducked to the ground, covered their heads, and held onto tables. It was the start of the Metro Manila shake drill.

An hour before the big event, the Quezon City Disaster Risk Reduction and Management Council (QCDRRMC) held an operation briefing at their headquarters along Kalayaan Avenue.

It was a room full of men and women in uniforms – blue for those belonging to the Quezon City Department of Public Order and Safety (QCDPOS), and orange for those from the QCDRRMC.

They discussed the objectives of the day’s drill such as assuring the safety of the responders and participants, and managing the clearing operation and establishing temporary shelters.

After the short briefing, the men and women responsible for the drill went to their vans and trucks and headed to QCMC, where they went on standby. Together with the rescuers and volunteers were the participants acting as victims for the event. Complete with makeup and a bit of prostethics, some of them even took selfies before heading to the venue with excitement.

After a minute or two of ringing and makeshift earthquake sounds, ambulances, firetrucks, backhoes, and vans from different government agencies arrived successively. Those who ducked, covered, and held took photos and videos of the parade of sirens.

This kind of response to the drill was happening nationwide, not just in Quezon City, as reflected on Twitter. From 7 AM to 1pm, the #MMShakeDrill remained at the top spot of trending topics in the Philippines. It also reached over 3.5 billion impressions, according to Rappler’s social listening tool Reach. On Twitter, “impressions” means “the times a user is served a Tweet in timeline or search results.”

The setup of different stations in Quezon City was quick. The Philippine Red Cross immediately set up a field hospital in an empty area between the Commonwealth entrance of the venue and the Quezon Memorial shrine. There were lines of stretchers, tents, and ambulances, all ready to operate once needed. (READ: “#MMShakeDrill is almost real’)

The Quezon City Social Services Development Department also established a station called the Interviewing Area, where people lined up and were asked for certain information for documentation.

An outpour of ‘victims’

About 15 minutes past the simulated quake, the first victim was brought to the field hospital. A man of about 25 years old was rescued from the 6th floor of the Quezon City Hall. Rescuers said that it was a possible case of suffocation from the fire incident.

For over an hour, the victims continued to arrive – those with burns, abrasions, lacerations, incisions, and fractures. At the end of the drill, there were approximately 15 victims that were supposedly rescued by the Philippine Red Cross and the Quezon City Health Department. 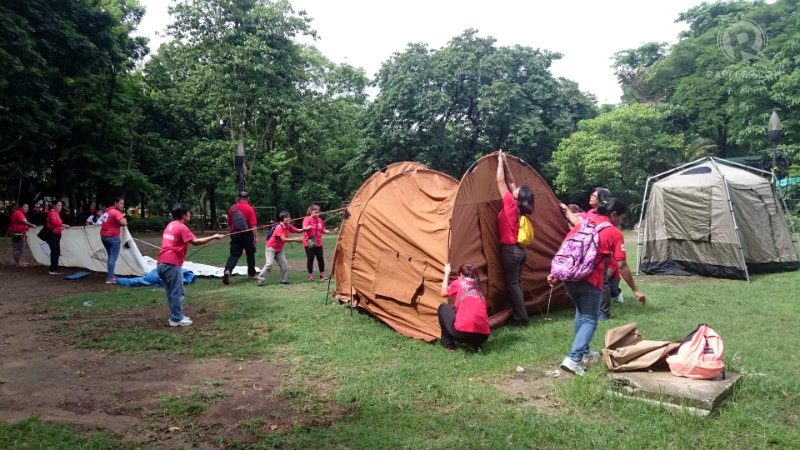 Aside from the victims, there was also a simulation of a looting incident near the Commonwealth entrance of QCMC. There were robbers, policemen, a police car, and the chase.

The event ended with the transfer of command from the QCDRRMC to the Metro Manila Disaster Risk Reduction and Management Council.

General Elmo San Diego (Ret) of the QCDPOS said that in Quezon City, they aim to have at least 4 earthquake drills every year. This is because the city will be hit hardest when the 7.2-magnitude earthquake along the West Valley Fault strikes.

The West Valley Fault traverses along Metro Manila and its nearby provinces such as Bulacan, Rizal, Cavite, and Laguna. Areas in Quezon City that are directly above the fault include Batasan Hills, White Plains, Payatas, and Loyola Heights.

San Diego added that approximately 30% of the buildings in the city, those built during the 1970s and earlier, will surely collapse when “the big one” comes. To give an idea on the expected number of casualties, he said that the local government has 30,000 body bags prepared for such cases.

This is close to the estimated 34,000 fatalities based on the Metropolitan Manila Earthquake Impact Reduction Study conducted in 2004. San Diego emphasized the importance of the drill, both for the government and the public. He said that even though many pedestrians ignored the event, it is important that the frontline departments of the local government, such as the QCDRRMC and the QCDPOS, are prepared for emergencies.

He also likened the drill to playing basketball. “Every now and then, we need to practice. So when the time comes that we need to shoot, we will shoot!”

There were a few changes from last year’s drill. San Diego, for one, expressed his satisfaction with the participation of medicolegal sections in the mobilization. He said that they will be useful in identifying dead bodies, together with the National Bureau of Investigation.

Mike Marasigan, head of QCDRRMC, said that there were more partners this year, such as those from the private sectors, business organizations, schools, churches, etc.

While he admitted that there will always be room for improvement, Marasigan said the drill was an overall success.  He also reiterated what San Diego said – that it is important for the local governments to know their roles, and for the citizens to know their responsibilities, such as knowing the nearest evacuation center.

“When everyone is informed and is helping one another, casualties will be lessened,” Marasigan concluded. – Rappler.com

Renzo Acosta is a Rappler intern.