Facebook Twitter Copy URL
Copied
With only one passageway open, Batasan Hills National High School manages to evacuate only half of its morning students in 23 minutes

This number proved to be a challenge during the Metro Manila Shake Drill, the metro-wide earthquake drill aimed at testing government response to a 7.2-magnitude earthquake.

The movement of the West Valley Fault, an event expected to happen within our lifetime, is projected to generate a devastating earthquake in the capital region. A scan of the West Valley Fault Atlas found several schools, hospitals, military installations, prominent neighborhoods, and utilities that are located within 500 meters to one kilometer from the active fault.

Fortunately, the BHNSH is not one of them. This does not mean, however, that the school is exempted from the predicted damage of the earthquake.

If the 7.2-magnitude earthquake does occur, experts said that the capital region could run out of food and water for at least a week. The disaster could also result in an estimated 33,500 casualties and 113,600 wounded, according to a Metro Manila Earthquake Impact Reduction Study (MMEIRS) in 2010.

With a morning-afternoon separation, the number of students to be looked after are already halfed at the time of an earthquake. But this still leaves more than 6,000 students in need of urgent evacuation.

Assistant Principal Cerilo Castillo Jr explained that the school has done what it can to prepare their students for “the big one” by holding monthly drills.

Although he admitted that the large number of students continue to overwhelm teachers and barangay volunteers during drills, Castillo admitted that they are manageable with proper “conditioning.”

With the school’s lack of space and passages for evacuation, Castillo explained that their biggest worry is having a stampede in case of an emergency. 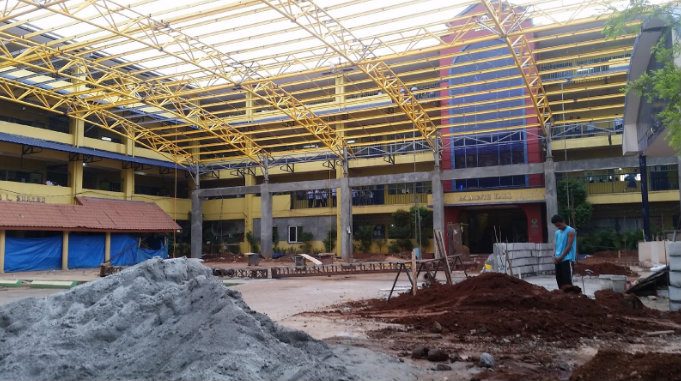 The school used to have three large passageways, enough to send 6,000 students to the adjacent park in 5 minutes. But ever since construction in the school started in March 2016, two gates have been temporarily closed.

Structures currently under renovation are the school quadrangle and a new 4-storey school building. The two major passages are blocked because of the danger of falling debris.

With a single passageway open during the drill, BHNHS clocked at 23 minutes and only managed to evacuate half of the morning session students.

The construction has been pushed back before to accommodate end-of-year celebrations like recognitions, and graduations.

(The local government is in carge of the building constructions. We are just here to teach the students. We are not responsible for the school structures.)

Overall, the #MMShakeDrill,which took place alongside #Pagyanig or the nationwide simultaneous earthquake drill, ended successfully.  With a more organized and widespread approach, disaster managers said the drills not only heightened public awareness but also enhanced the capacity of responsible government agencies to respond if a major earthquake strikes. (READ: #MMShakeDrill: What happened in the north?)

For BHNHS, preparing the students for disasters is a challenge they will continually try to solve. – Rappler.com

Rambo Talobong is a student of the Ateneo de Manila University. He is a Rappler inter.