Jun 30, 2016 5:13 PM PHT
David Lozada
Facebook Twitter Copy URL
Copied
(Updated) At least 2,000 rallyists from various militant and sectoral groups march to Mendiola – hoping that the Duterte presidency will address the concerns of the masses and other key issues that the Aquino administration 'neglected' 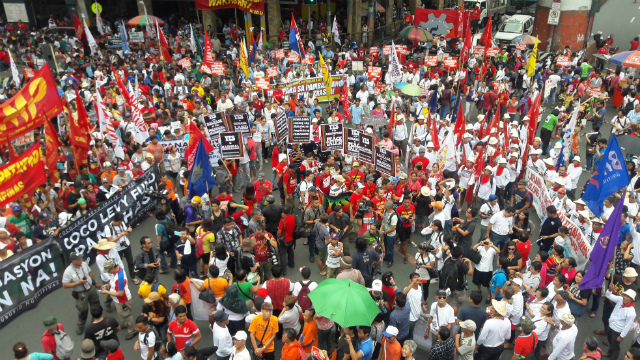 MANILA, Philippines – (UPDATED) Marching militants and loud chants fill the streets of Mendiola. But this time it’s not a protest.

At least 2,000 people from various militant and sectoral groups staged a mass rally in the Freedom Park on Thursday, June 30, to celebrate the end of President Benigno Aquino III’s administration and welcome President Rodrigo Roa Duterte.

Groups from the youth, agrarian reform movement, indigenous peoples, and health, labor and transport unions marched from different points of the city to Mendiola. They carried with them the hope that the Duterte presidency will solve the concerns of the masses and other key issues that the Aquino administration “neglected.”

According to Kabataan Partylist representative Sarah Elago, their group is hopeful that the new president will solve the country’s education woes.

“We hope that the president will support the clamor for free education in all levels. That requires stopping the yearly increase in tuition and other school fees, junking redundant fees, greater fiscal subsidy for public education, and scrap the commercialization of education,” Elago told Rappler.

She added: “This is a show of commitment in our unity that we are really resolved to mobilize and strengthen the fight for the youth’s call for free education.”

The country’s education system during the past 6 years, Elago noted, became exclusive because of higher fees resulting in the increase of dropouts and out of school youth.

Farmers from Cagayan Valley, Bicol, Southern Luzon, and Mindanao joined the rally to “challenge Duterte to take concrete steps to realize his platform of ‘change.’”

He added: “To give social justice to farmers, whom, for many decades, were deprived of their right to land, a genuine land reform program with the component of free land distribution is just and necessary.”

With the appointment of former Anakpawis partylist representative and KMP chairman Rafael Mariano as the new agrarian reform secretary, the group is hopeful that the following haciendas will be distributed to farmers:

“Attempts to revive the CARP should also be junked,” Flores added.

Among the first groups to arrive in Mendiola are members of the Alliance of Health Workers (AHW) which condemned the Aquino administration for what it called the “privatization of health services.”

“Our health care system was not able to cater to the needs of the poor during the past administration. The price for hospitals was already high and it was still increased during Aquino’s last year,” AHW’s Robert Mendoza told Rappler. 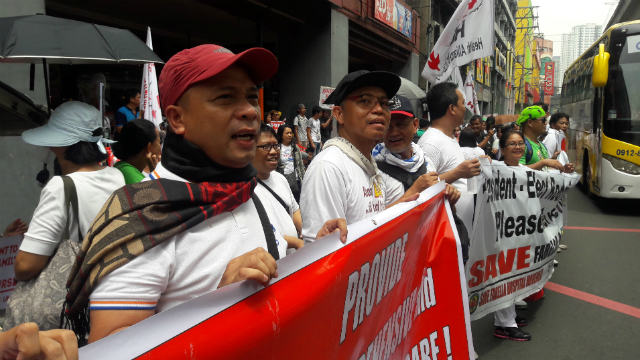 He added: “This is not a protest rally but an inauguration rally to show we’re united with our new president. Our goal is to lay down the people’s agenda on health…We ask the new president to create programs that will give free healthcare to the poor.”

Workers from Fabella Hospital were also present during the rally, asking the new president to pay attention to the hospital’s status.

“We express our frustration that it seems we have no new ally on the new secretary of health, Dr Paulyn Jean Rosell Ubial. She still wants to abolish the Fabella Hospital and establish a corporatized maternity hospital. She prioritizes to make business out of poor mothers and babies,” Mendoza said.

The group said they will continue their barricade to challenge the new Department of Health (DOH) secretary’s decision.

BAYAN Secretary-General Renato Reyes asked the rallyists to cooperate with the new president and help him achieve the “change” people are clamoring for.

“The president said no leader will succeed if he does not rely in the strength of his constituents and the masses. Any president who wants to succeed needs to listen to the people. This is why we created a people’s agenda to help guide the president on which programs and platforms to pursue,” Reyes told the crowd. 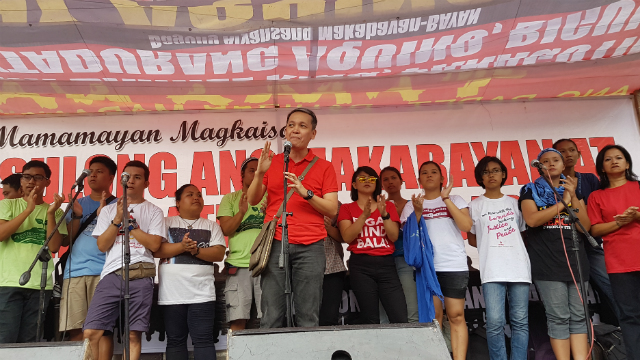 The leftist leaders met with Duterte right after the rally to present the people’s agenda which was formed by the different progressive groups on Wednesday, June 29. Reyes said they are hopeful the president will listen to their concerns.

“His job will not be easy because he will inherit the many problems left by former president Aquino. He will inherit the ever-present corruption, the unfair international agreements like the EDCA, and the multipile human rights violations,” Reyes told the rallyists.

While the left supports the presidency, Reyes said the fight for change continues.

This was echoed by Cristina Palabay, Secretary-General of KARAPATAN, expressing her strong sentiment against the alleged human rights violations in Davao City.

“KARAPATAN is absolutely against extrajudicial killings [and we] believe that due process should be observed” she told Rappler.

With recent reports about the death of 54 alleged drug traffickers, several groups including the independent Commission on Human Rights (CHR) have slammed Duterte for the extrajudicial killings that took place in Davao City when he was mayor.

Palabay said, however, that human rights violations are not new. “Aquino spearheaded the implementation of Oplan Bayanihan which caused a great amount of killings,” she asserted.

The previous administration has been on the receiving end of criticisms from the left for their share of supposed human rights violations against the Lumads in Mindanao.

“We look at this administration in a perspective that the challenge is greater than ever to the people to pursue genuine peace and justice.” Palabay concluded. – with reports from Pocholo Espina/Rappler.com