Facebook Twitter Copy URL
Copied
Passengers of a diverted Cebu Pacific flight say the airline failed to assist them when they got stranded in Mumbai, India

MANILA, Philippines – Overseas Filipino worker (OFW) Rhoy Landicho was finally going to have his much-awaited vacation after he filed a leave from work in Oman to be with his family in the Philippines.

But Landicho had to wait for days to begin his vacation, as the Dubai-Manila flight he was on had to make an emergency landing in Mumbai, India, leaving all 347 passengers stranded.

According to the passengers, Cebu Pacific flight 5J015 was supposed to leave Dubai on June 28 at 11:10 pm local time. But the plane ended up departing at around 2 am, June 29 – nearly 3 hours later – due to what the pilot described as a “technical issue.”

Passenger May-ann Charisse Agosto said they experienced turbulence and heard weird noises from the plane a few hours after take-off. The pilot then announced that they had to make an emergency landing at Mumbai’s Chhatrapati Shivaji International Airport.

Cebu Pacific issued a statement on June 29, citing only “technical requirements” as the reason. Some of the passengers said they were told that there was an oil leakage.

Around 7 am in Mumbai time, the plane landed safely. But that’s when the passengers’ nightmares began.

According to Agosto and Landicho, passengers were not allowed to leave the aircraft while it was being checked because they didn’t have the necessary documents to set foot in India. They stayed inside the plane for around 8 hours more after landing.

The first few hours, Agosto said, were okay. The passengers, already irked because of the delay, were still thankful they were safe.

But after two hours, the air conditioning inside the plane was turned off as the engines were being checked. The passengers later on began complaining about the heat and lack of ventilation.

It came to a point that Agosto, who suffers from asthma, already had difficulty breathing. The airline crew, fortunately, were able to find a doctor among the passengers to help her.

Landicho also complained about the food. He said they expected a full meal from the airline, but were only given “very small” sandwiches for lunch.

He added that the flight attendants even tried to sell food to them during their ordeal.

(What pains me is that we were in a crisis, and they had food. Instead of giving us food, they were selling the food to us. The person sitting right next to me was hungry and asked for hot water for her noodles. The flight attendant told her, “Buy anything first.”)

Landicho said that even drinking water wasn’t free. He recalled that a passenger asked for water from one of the attendants, who then asked for P500 for 5 bottles of water.

The passengers were only allowed to leave the plane just before 6 pm. They then headed to the immigration office, which took their passports before they were given temporary visas and allowed to go to the hotels booked by Cebu Pacific.

Another passenger, JC Vargas, said the airline did not provide assistance during this process.

(From the plane until we reached the hotel, no one from the crew assisted us. We didn’t know who to talk to or where to go. We organized the group ourselves.)

This contradicts Cebu Pacific’s initial statement, which said travel help desks were set up at the passengers’ hotels “to provide immediate assistance.”

(What travel help desks? The representative from their partner travel agency only showed up when we were about to come home.)

(The staff hid. They probably did not know what to say.)

Agosto said they eventually cornered the airline staff, who they found out were just in the same hotel. But Agosto said the crew could not give them any update, with one reportedly even saying, “Pare-pareho lang tayong stranded. Buti nga kayo may dalang mga damit.” (We’re all stranded here. At least you all have spare clothes.)

With no one from the crew and management leading them, the group was in disarray. Landicho said some of the passengers’ items went missing, and some were unable to eat dinner on their first night after miscommunication with the hotel.

Frustrated, the passengers formed a small group to lead, including Vargas, Landicho, and Agosto. They did everything from room assignments, to listing down all the passengers who were stranded and who should be prioritized and taken home first – a list that the airline didn’t use.

Cebu Pacific, in a statement, promised to rebook the passengers with other airlines.

Frustrated by the airline’s pace, however, the passengers took to social media to vent their anger. Landicho’s group created a Facebook group for all the passengers and, using the hashtag #CebuPac5J015, demanded immediate action.

Another post on their Facebook group showed an elderly passenger on a wheelchair. According to Agosto, who identified her only as “Mommy Pedrita,” she had to be taken to the hospital because of high blood pressure. However, Agosto said they were only informed about the flight an hour before departure time. Some also missed the flight after the representative from the airline’s partner agency failed to hand over their passports on time.

Fortunately, Thai Airways, after talking with the passengers, allowed them to take the next flight instead, which left Mumbai at 2:30 am on July 1.

The rest of the passengers went home in batches. According to Cebu Pacific’s latest advisory, the last batch would arrive in Manila on July 3.

“While in Mumbai, passengers were provided hotel accommodation, meals, and transfers, as CEB finalized the onward travel for each passenger. CEB’s Customer Care team is also reaching out directly to all affected passengers to provide further support, and to address any concerns they may have even after their arrival in Manila,” the airline added.

Some of the passengers also paid for their own tickets and are now demanding reimbursement from the airline.

Upon arrival, passengers were met by representatives from Cebu Pacific who gave them an apology letter. With it was a voucher for a round-trip flight anywhere via Cebu Pacific, redeemable within 6 months.

Agosto and other passengers, however, said they refused to take the voucher because it required signing a waiver that would clear the airline from all accountabilities. 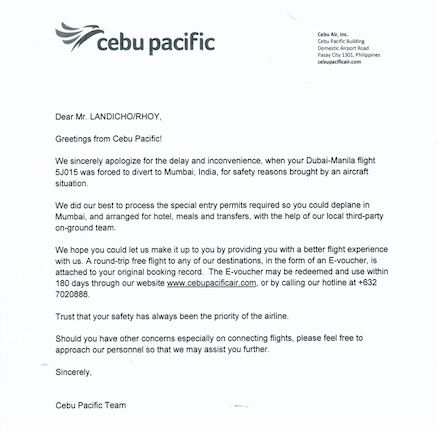 Their group also went to the Cebu Pacific management office at the Ninoy Aquino International Airport (NAIA), seeking an explanation from the airline. But the manager, according to Agosto, did not talk to them. Instead, a supervisor asked them to file a formal report.

The group is now thinking of suing Cebu Pacific.

“The problem really is the terrible crisis management. We also want to sit down with Cebu Pacific management and talk about this,” said Landicho, who, instead of enjoying his vacation with his family, will be working on their complaint against the airline.

Rappler has reached out to media@cebupacificair.com for comment. – Rappler.com

Are you an OFW? Join Rappler’s online community BalikBayan.