MANILA, Philippines – The age of tech disruption is already upon us – and digital experts are saying that we have to brace ourselves for impact.

“There’s a tsunami of exponential technologies that will disrupt organizations and businesses. [But] most people will just stay put. They won’t be able to disrupt until it’s too late,” said Yuri Van Geest, co-author of Exponential Organizations.

Van Geest made this statement during his keynote at Rappler’s ThinkPH: Back to Disruptive Basics last Thursday, July 21, at the Newport Performing Arts Theater in Pasay.  (READ: #ThinkPH: Man must learn to dance with machines – Van Geest)

The tech summit, which is now on its third year, focused on disruptive thinking and how businesses and individuals can harness it for success.

Exponential technologies – such as 3D printing, renewable energy, and DNA profiling – are things that, in the past 10 years, have increased capability tenfold even as their costs continue to go down. And according to industry experts, the trend will keep accelerating.

This will also transform organizations, as machines become smarter and more efficient in performing tasks. In the next five years, many jobs will become obsolete.

“Are you able to let go and trust the machine?” Van Geest said. “Can you let go of control and trust its capabilities? It’s an existential decision for human beings.”

An economy of purpose 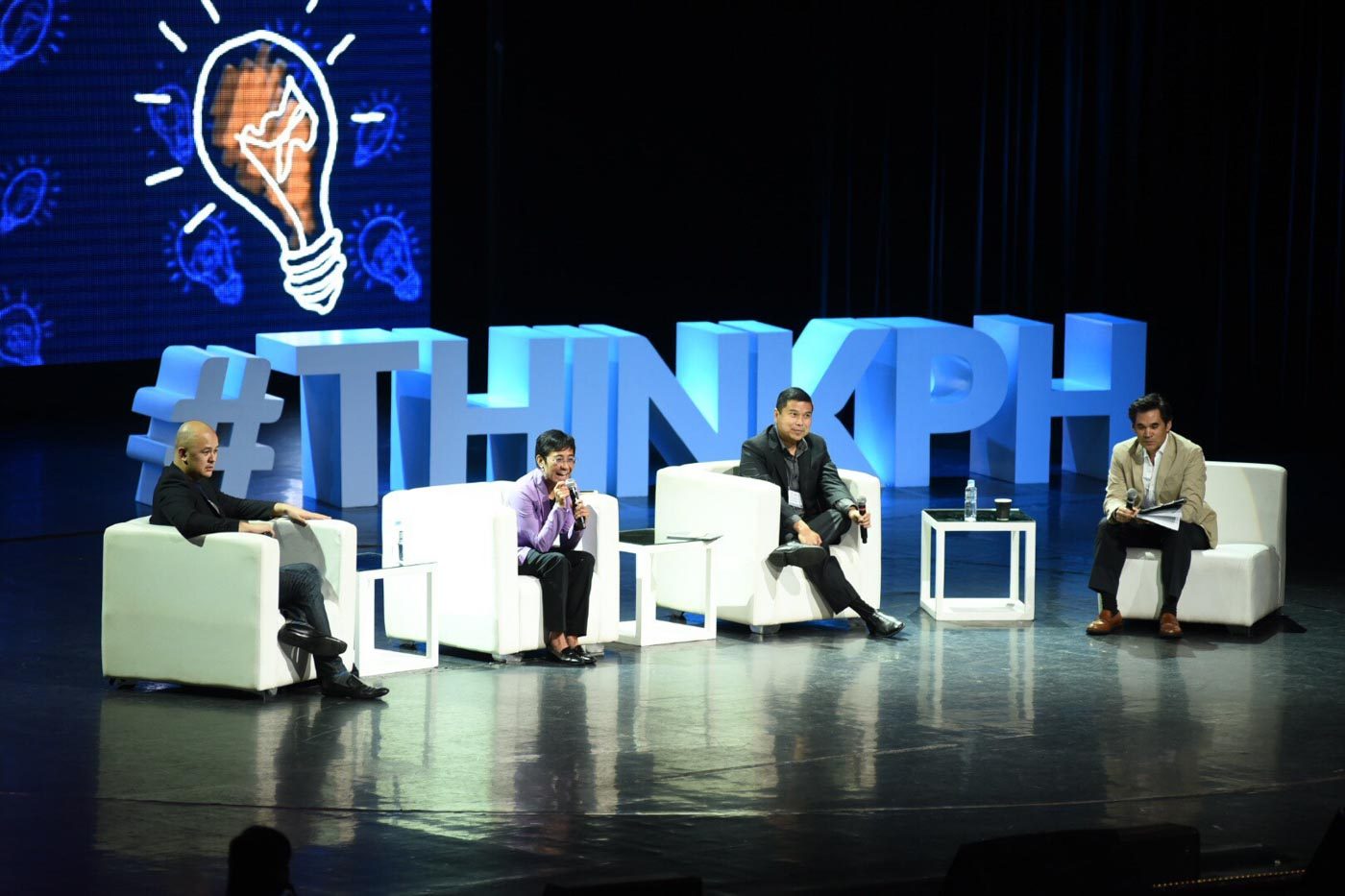 In a world where machines will take over everything from banking to driving, what jobs will be left for human beings?

Paul Rivera, CEO and Co-founder of jobs platform Kalibrr, says that we shouldn’t worry about losing all our jobs just yet. “[Disruption] has already happened… [But] it’s happening more slowly than people think,” he said during a panel discussion.

“Flow of capital is an issue,” agreed co-panelist Nix Nolledo, CEO of Xurpas. He described the Philippines’ current startup market as much smaller than its regional counterparts, such as Indonesia. Still, fuel from venture capital continues to grow. “The incumbents have to be ready. It’s an inevitability that will happen,” he said.

Disruptive companies such as Uber and AirBnB have created a new “on-demand economy” where jobs are driven by purpose rather than income or stability. “The most important skill of the future is the ability to self-learn,” Rivera said.

Joining Rivera and Nolledo on the panel, Rappler CEO Maria Ressa cited how even the media industry has evolved because of technology. With a smartphone, one journalist can now easily do the job of 4. “That’s where credibility matters,” she said.

Creativity will also play a big role, according to Eric Cruz, Executive Creative Director at AKQA Shanghai. He dubbed this age as “the most creative moment in moment in history,” where technology enables anyone to earn lucratively from their passion – whatever it is. For example, it was passion and purpose that inspired Angelo Umali to invent the Simple Wave, a device that can monitor the elderly’s health and provide them assistance in case of falls. The UCLA Engineering graduate originally wanted to be a doctor, but he ended up founding a wearable tech company. “My desire to save lives is now being done through technology,” he said. E-commerce website Lazada also adapted fast to meet the demands of the Philippine market – a customer base where credit card acquisition is low and only 3 out 10 people have bank accounts. Inanc Balci, President and CEO of Lazada Philippines, recounts how the company invested heavily in setting up its own logistics and payment companies to improve service. The effort paid off. Now, even as they have signed partnerships with retail giants such as SM and Amazon, the company is focused on empowering small businesses by providing them an accessible, efficient platform. “Lazada has leveled the playing field for everyone,” Balci said.

Multinational corporations are not spared from the pressure to embrace disruption, as they face competition from startups who can conceptualize, execute, and reach markets ahead of them. Mitch Locsin, Vice President and head of PLDT and Smart SME Nation admitted that telcos were hit hardest by the digital disruption. “We used to be a network built for talk and text,” he said. But when mobile Internet ushered in the boom of social networks and OTT apps, they were forced to shift strategy.

Nestle Philippines’ Senior Vice President and Head of Marketing and Consumer Communications, Paolo Mercado, agreed that the online revolution was also crucial for a company that’s more than 100 years old. “We had to offer something relevant through technology,” he said.

Even as incumbents are learning to use data to understand their markets better, there’s already a new, upcoming challenge – the rising popularity of chat platforms such as Facebook Messenger (which just hit the 1.5 billion user mark), Viber, and Whatsapp.

According to Simon Kemp, founder of Kepios and Marketing Strategist at We Are Social, 3 of the most popular social apps in the Philippines are mobile messaging apps. In 18 months, Kemp predicts that mobile messaging will overtake Facebook to become the world’s most active social platform. If this happens, it will spell trouble for advertisers. “It’s very difficult to buy your way in to people’s conversations,” he said. In the new metrics of success, likes and followers will matter far less. Kemp urged companies to go back and reinvent other tangible aspects of marketing – such as packaging, point of sale, and customer service. Companies need to treat social media engagement as the outcome of great marketing, rather than its measure, he added.

So what can companies and individuals do? How can they adapt and transform for this exciting, yet uncertain tomorrow?

Think forward, but go back to the basics, all speakers urged.

Van Geest and Cruz stressed that purpose will become the most important goal for companies. If you pursue what’s naturally important for you, everything else will follow. Tech companies are already adopting this mantra. Twitter’s Vice President for Asia-Pacific and Middle East, Rishi Jaitly, said that traditional storytelling is already being replaced by a “confluence of culture,” where audiences interpret the same events differently.

Online, it becomes less about what people want to be told, and more about what they want to tell themselves. This is why Twitter now has #GoLive, which allows people to share and discuss real-time moments right in their timelines. “We think about the problem in 3 ways: connectivity, accessibility, relevance,” said Alice Wei, Head of Strategic Partnerships in Southeast Asia for Facebook. This approach has let to Facebook’s new Messenger Platform, which provides Messenger users the ability to interact with brands in a more personal and efficient way. “The Internet economy is not about people getting access, but people getting empowered to contribute to the Internet,” said Ken Lingan, Country Manager for Google Philippines. With their new suite of products, Google is moving from being a mere information aggregator to becoming a true personal assistant – continuously evolving and inventing products that will benefit humans in every single minute of their lives.

According to Peng T. Ong, founder of Monk’s Hill Ventures, we are moving closer to singularity – a world where “machines become so much more advanced than humans.” The rate of growth and change will be so great that it will be impossible to predict what the future really looks like. These digital experts are optimistic. The prevailing note at #ThinkPH is that, in the coming years, big companies and individuals will have true equal capability to make a difference.

Banner image from Pushpin Visual Solutions. Pushpin Visual Solutions is the first studio in the country that specializes in live, hand-drawn visualizations of conversations, talks, conferences, and other events. They also provide a range of design and illustration services for training and learning activities. Learn more at www.pushpinvisuals.com