IN NUMBERS: Impact of corruption on the Philippines Facebook Twitter Copy URL
Copied
Sums lost to corruption could have been used for education, health, or infrastructure

MANILA, Philippines – Are you aware of how huge the impact of corruption is on the country?

Under the administration of former president Benigno Aquino III, the campaign on good governance was hinged on the slogan, “Pag walang kurap, walang mahirap (if there is no corruption, there is no poverty).”

This anti-corruption campaign was supported by several studies – including a 2013 survey conducted by the Office of the Ombudsman, which showed that poverty exists partly because of corruption.

Similarly, a report by the World Bank in 2001 said that fighting corruption results in poverty reduction, better delivery of social services, and quality infrastructure.

Research we conducted on corruption in the Philippines and its impact on the economy, businesses, social services, citizen participation in reporting bribes, and being party to bribery yielded the following:

According to a 2014 report by Global Financial Integrity, the Philippines lost about $410.5 billion between 1960 and 2011 on illicit financial flow. In current exchange rates, the amount is about P19.34 trillion (without accounting for inflation).

The vast majority of money flowing illegally into and out of the Philippines over the 52-year time span was done mostly through misinvoicing of trade. The table below shows how much money the government lost between 1960 and 2011:

In effect, the P19.34 trillion lost to corruption could have been used for education, health or infrastructure. In the 2016 national budget, this amount is:

2. $1 of every $4 goes unreported to Customs officials

According to Global Financial Integrity, money flowing illicitly into the country takes away 25% of the value of all goods as $1 in every $4 goes unreported to Customs officials.

Since 2000, illicit financial flows have cheated the government of an average of $1.46 billion in tax revenue each year or about P68.8 billion in current rates.

3. The Philippines ranks 95th in the global corruption perception index

Apart from grave impact on the fiscal arena, corruption affects the business climate.

According to anti-graft watchdog Transparency International (TI), the Philippines slid in its annual corruption perception ranking. With a score of 35 out of a possible 100, the country currently ranks 95th among 168 countries surveyed, according to expert opinion.

Over the years, trust in the public sector seems to have improved based on TI’s data. According to the report, poor results are attributed to promises yet to be fulfilled and corruption efforts undermined.

There were other issues that put the government in a bad light, such as the Disbursement Acceleration Program (DAP) and the reported delay in aid to victims of Super Typhoon Yolanda (Haiyan). (READ: What stats, surveys say about Aquino’s fight vs corruption)

4. In ASEAN, the Philippines is perceived as the 5th least corrupt nation

Compared to Southeast Asian neighbors, the Philippines currently is the 5th least corrupt nation among 10 member-states in the region.

This is particularly important as these numbers determine how attractive the country is to investors.

In 2014, the Philippines tied with Thailand as the 3rd least corrupt nation in the region. It was when the country attained its highest rank in the past decade.

Back in 2008, the Philippines used to be the 4th most corrupt nation when it experienced its lowest dip in rankings. At the time, alleged corruption during the term of former president Gloria Macapagal-Arroyo hit an all-time high. (READ: TIMELINE: Gloria Arroyo – from plunder to acquittal)

Throughout the decade, Singapore has remained to be the perceived as corrupt-free not only within Southeast Asia, but around the world. It topped the rankings in 2010.

5. Filipino executives still think that the Bureau of Customs is the most corrupt government agency

The results of the 2014/2015 Social Weather Stations Survey of Enterprises on Corruption showed that 32% of Filipino executives surveyed said they have personal knowledge of corrupt transactions with the government.

Among agencies, Filipino businessmen still think that the Bureau of Customs is the most corrupt. The BOC received a sincerity rating of -55 from -65 in 2013. Despite the improvement, it was the only agency with a “very bad” rating in its “sincerity” in fightiing corruption.

Results also showed that 28% of the respondents said most companies in their line of business gave bribes to win private sector contracts. 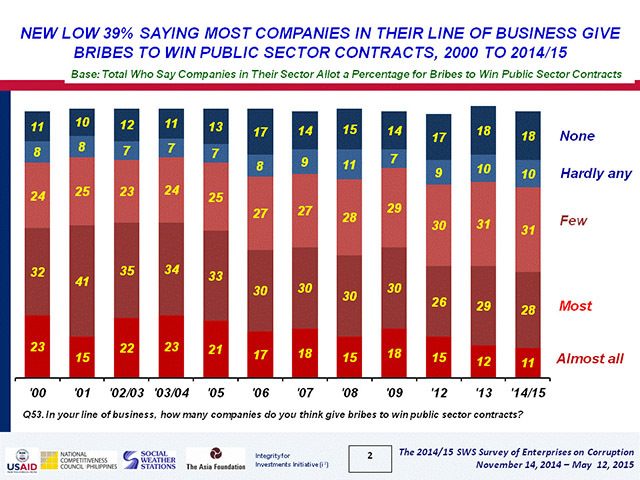 However, 57% said that corrupt executives in their own sector of business are often punished. In the same 2014/2015 poll, of those solicited for bribes, only 13% admitted paying the bribe and reported the incident.

Overall, 64% of those surveyed were satisfied with the national government’s performance in promoting a good business climate but lower than 2013’s record of 70%.

7. One out of 20 families engages in bribery

Apart from businesses, data show that families and individuals take part in dishonest transactions as well.

In a 2013 survey, the Office of the Ombudsman found that one in every 20 Filipino families paid a bribe or grease money when transacting with a government agency.

Compared to a similar survey by the Philippine Statistics Authority in 2010, fewer families paid a bribe in 2013. The earlier survey found that two in every 20 families gave grease money.

Results showed that agencies involved in the delivery of basic social services are more vulnerable to corruption. Despite the decrease in participation in bribery, more families paid bribes when availing of social services. In 2010, the percentage of families who paid bribes was 4.1%; this increased to 4.5% by 2013.

Ironically, poor families are more likely to pay bribes just to have access to basic services, the poll revealed.

Despite the aggressive anti-corruption drive of the government, the Ombudsman found that the number of families that reported bribery incidents to public authorities is still low.

The 2013 survey said that 5.3% of the families who experienced being solicited for bribes reported the incident. This figure is almost 7 times the percentage of families in 2010.

The most cited reason for non-reporting is the amount being asked is too small to bother about. Other reasons were fear of reprisal and lack of time to report. – with Denise Nacnac/Rappler.com

Denise Nacnac is a Rappler intern

Have you ever been asked to give a bribe? Email details to notonmywatch@rappler.com. It will help if you send supporting documents and contact information so we can reach you in case we need more details.

You may also report using the form below

Encourage your friends to join and become integrity champions by sharing this link on Facebook and Twitter.

Would you like to help validate reports? Email us via notonmywatch@rappler.com so we can invite you to the validation workshops!