4 things to know about eUP’s SAIS 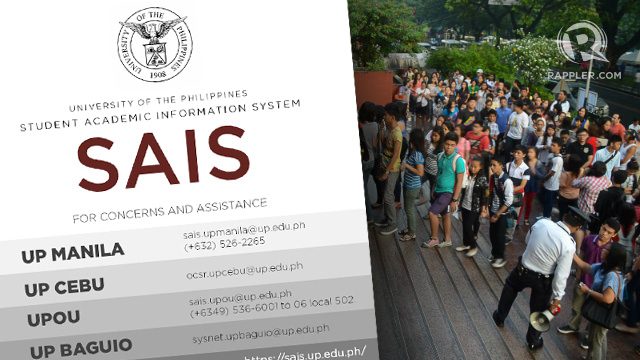 Facebook Twitter Copy URL
Copied
The goal of the eUP Student Academic Information System (SAIS) to ease up registration and harmonize the ICT infrastructure and systems of all campus units is promising. What went wrong?

MANILA, Philippines – The goal of the eUP Student Academic Information System (SAIS) to address previous problems in the University of the Philippines’ enlistment process is promising.

But when it was rolled in UP Los Baños (UPLB) for the first semester of academic year 2016-17, people did not celebrate. On the contrary, UPLB students slammed the new enlistment system after glitches sent throngs of students to camp out early Friday to Saturday, July 29 to 30, in order to secure slots in their preferred classes.

A comprehensive data management system, SAIS aims to cover the entire student lifecycle –from admission, registration, and enrollment, to graduation and alumni tracking.

According to UP students, the system has miserably failed to serve its purpose of  improving the enlistment process, triggering an online clamor to junk the new system. Here are 4 things you should know about SAIS:

Introduced in 2012, the eUP project aims to “integrate and harmonize the Information and Communication Technology (ICT) infrastructure and system across all constituent universities (CUs) of the UP System.” The system uses a software called Oracle, which is also employed by over 800 campuses, including top universities in Asia such as the National University of Singapore and University of Hongkong.

Prior to the eUP project, each campus units use different ICT workflows and systems resulting to “slow processing of data, lack of standardization of academic-related processes, data errors, and the lack of IT information dissemination.”

By making systems in campus units interoperable, the eUP projects aim to make UP more efficient and competitive to global standards. The integration of the information system also means the information of students across all campuses in the state university will be pooled into a single database. This is expected to make getting grades, cross-registration and shifting or transferring easier.

It is expected to span for six (6) years and will completely roll out to all UP campuses by 2017.

SAIS has so far been implemented in three CUs: Los Banos, Manila and Baguio. It is scheduled to be rolled out across all the UP campuses, including UP Diliman.

3) Aims to ease up registration

SAIS introduced new features that were not present in its predecessors, allowing students not only to enlist in their preferred classes but also to pay for fees and request for documents.

It is not only built for students. Responding to the needs of faculty and staff, SAIS also intended to make enrollment and student requests online easier.

Unfortunately, instead of making enlistment easier, students complained of a more difficult enrollment experience. Aside from the supposed poor user experience SAIS offers, the SAIS website has been reportedly inaccessible during the schedule of enlistment.

Several organizations and student councils across different CUs have called for the junking of SAIS. (READ: X – UPJES’ Official Statement to #JunkSAIS)

This is not the first time the project was met with protest. As early as 2014, the system has been criticized by students in UP Manila after it was first partially rolled out in the campus.

According to Tinig ng Plaridel, UP Manila students attributed the dismal results of the enlistment with SAIS to lack of information dissemination about its interface and functions. Students also reported a lot of bugs and system glitches.

The experience of students in UPLB has triggered a widespread call to junk the new online enlistment system across all CUs. Below are statements made by UP student councils and student organizations:

On Sunday, July 30, the eUP project team apologized to UP students, staff and faculty on Facebook for failing to serve its purpose of easing enrolment for the UP community.

“Rest assured that we, the eUP Team, SAIS Team, the administration of UP Los Banos, and ePLDT are all doing our best to resolve issues in the system as soon as they are detected and reported. We are also continuously attending to all support requests received through our official channels,” they said. – Rappler.com