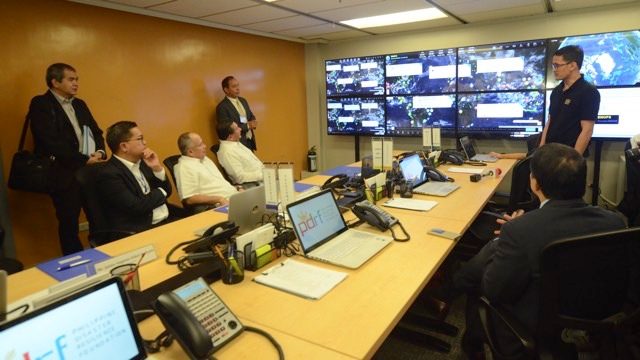 Facebook Twitter Copy URL
Copied
The center, located in Makati, will run 24/7 in times of a disaster to gather data and coordinate preparedness and response plans of PDRF’s member companies

MANILA, Philippines – While the majority of the Philippines sleeps, there are teams of people who are up, keeping watch over the country in case a disaster strikes.

They are weather forecasters, disaster managers, and individual volunteers who see it as their duty to be the first to sound the alarm and mobilize responders in a crisis.

Just as in other countries, the Philippine government takes the lead in disaster management. But the private sector and civil society also play a large role, which has been welcomed by the government.

On Wednesday, August 11, the Philippine Disaster Resilience Foundation launched the country’s first-ever private sector-led Emergency Operations Center (EOC). The center, located in Makati, will run 24/7 in times of a disaster to gather data and coordinate preparedness and response plans of PDRF’s member companies.

It is linked to the Pacific Disaster Center in Hawaii and is able to track any storm, volcanic eruption, or earthquake around the world. It will also link up with the government’s emergency operations center located in Camp Aguinaldo.

In a country constantly threatened by earthquakes, typhoons, and volcanoes, the risks are real and the stakes very high. (READ: Largest peace time evacuation)

For businesses, disasters result in affected employees, damaged assets, and lost revenue. This has prompted the business community to shift its resources to preparedness initiatives instead of the more traditional relief aid.

“We decided as a business community that we would all co-invest and pitch in to create the EOC,” said Bill Luz of the National Competitiveness Council. Luz is also PDRF’s chief resiliency officer.

PDRF co-chairmen Jaime Zobel de Ayala and Manny Pangilinan sat side-by-side at the launch of the center in a symbolic show of unity together with Manila Archbishop Cardinal Luis Antonio Tagle. Rivals in business, the two CEOs have put in their companies’ resources in PDRF and are hoping other companies will follow suit. This private sector-led effort reflects a major shift among stakeholders in disaster management toward more proactive collaboration and greater efficiency.

There is also an increasing reliance on data and technology.

Government initiatives, such as Project NOAH and the DWSD’s Virtual Ops Center, all make use of the latest mapping and satellite technology. (READ: The power of technology: Solutions for disaster response) Dr. Regina Estuar, Executive Director of the Ateneo Java Wireless Competency Center (AJWCC), said the Philippines is at par with the rest of the world in the adaptation of technology for disaster risk management and response. She added that the many initiatives in the country show how technology is helping bridge gaps in the delivery of information to the public.

“All these systems prove that we can actually develop platforms that will facilitate the transfer of targeted and actionable information. However, we need to ensure that the general public, who serves as our human sensors for disaster information, is not overwhelmed with so many options,” said Estuar.

According to Dr Fouad Bendimerad, chairman of the Earthquake and Megacities Initiative, the challenge moving forward is to make it easier to gather and share data among all the stakeholders.

“If we share the info, we can work better together,” said Bendimerad.

“If we focus on resilience and preparedness, we could save lives,” added Luz. – Rappler.com

PDRF is a partner of Agos powered by eBayanihan.