Sep 5, 2016 11:54 AM PHT
Luisa Pineda
Facebook Twitter Copy URL
Copied
Inspirational marine explorer and conservation advocate Alexandra Cousteau tells the youth that the future of conservation is in their hands 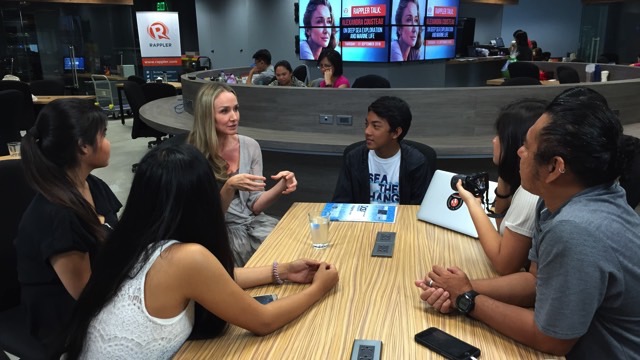 MANILA, Philippines – “I learned to swim before I could walk.”

Marine explorer and environmental advocate Alexandra Cousteau said of her first brush with the blue ocean as she sat down for a talk with several members of the UP Marine Biological Society (UP MBS). Cousteau had just wrapped up an interview at Rappler to talk about the need to conserve biodiversity-rich areas in the Philippines such as the Tañon Strait and the Coral Triangle. (READ: Ten things you didn’t know about the Tañon Strait)

Cousteau is the senior advisor to Oceana, a non-profit organization focused on ocean conservation. She is also the granddaughter of iconic undersea explorer and filmmaker Jacques Cousteau and has carried on her family’s love for the ocean and its legacy of environmental protection.

UP MBS got a chance to interview the renowned environmentalist on the role of the youth and the significance of the media in promoting advocacies and conservation issues in the Philippines and around the world. The Diliman-based organization promotes awareness of the marine environment through the sport of skin diving and the principles of environmentalism.

Home in the blue

Cousteau was stunned to hear student Jasmine Santiago recount their experience during coastal clean-ups within Metro Manila. Santiago mentioned how volunteers would not be able to see the sand underneath the piles of trash even after hours of collecting from the same spot.

As an experienced diver, Cousteau has seen it all. “I don’t actually dive as much as people think because of how much depressing stuff there is to see and I just don’t want to see it anymore.” From diseased corals to depleted ecosystems, staring devastation in the face comes with Cousteau’s job of being a dedicated environmental advocate. (READ: ‘Protecting Benham Bank key to food security’ – Oceana)

Cousteau revealed that, no matter how tough it gets underwater, she still finds home in her element. Whether in a pool, a sandy bottom, or a beautiful dive spot, Cousteau enjoys the blue and continues to practice her diving. 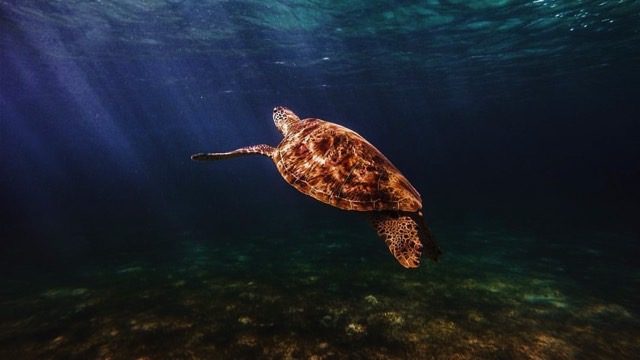 Cousteau is constantly inspired by the local people and the communities she meets all over the world, especially the youth who are involved in various environmental issues.

“It can get kind of lonely out there… like nothing you do matters and it’s never gonna change… everybody has those moments. And so when I find like-minded people and I find them around the world, it just makes you feel like you have a tribe.”

Cousteau encouraged the students by telling them that there are people around the world fighting for the same causes they are. “We simply do that because we are human,” she said. “The ocean is where we are from and it hurts to see it die.”

Apart from commending the youth and other student-led groups like UP MBS for participating in environmental advocacies, Cousteau was also impressed by the number of women who are involved in marine conservation here in the Philippines.

‘You are the storytellers’

Student Gab Mejia asked Cousteau about the most effective ways photography and other media can be utilized in advocacies such as marine conservation. She shared some anecdotes of how her grandparents used to make their first underwater films.

Cousteau explained how, unlike the filmmakers in her grandfather’s generation, anyone today can easily share their stories to the entire world and, in turn, become influencers.

Daniel Ocampo, the campaign manager of Oceana Philippines, is an underwater filmmaker and photographer who shared some tips with the students.

“No image is worth harassing or destroying marine life,” said Ocampo. He added that tourists and divers must be conscientious when photographing and filming underwater, as plants and animals can be sensitive to flash and other similar obstructions.

Cousteau urged the students: “Document how much fun you’re having. Don’t forget to turn the cameras on yourselves… They will join you because you’re having a blast.” She continued, “If you frame your stories as an adventure, people [will] want to have that human experience that you’re sharing with each other.”

Cousteau advised Mejia and the other UP MBS members to study and practice different media. She also encouraged them to find mentors and heroes like Ocampo, so that they may learn from them.

Although Cousteau has seen the beauty and destruction of marine life around the world, this year marks her first trip to the Philippines. Palawan and Apo Island are some of the destinations she will be visiting. She was proud to mention how her grandfather had filmed in El Nido in the 90s; and now, years later, her daughter will learn to snorkel for the first time there.

When asked what lies ahead for marine conservation, Cousteau believes its future is not up to her, but depends on all of us. Cousteau reminded the youth that the success of conservation efforts relies on how well people tell stories, cooperate, campaign, and communicate these important causes.

As they dive into another academic year ahead, the UP MBS members hope to encourage more Filipino youth to take action and become environmental influencers by following in the footsteps of its distinguished alumni, organizations like Oceana, and veterans such as Alexandra Cousteau. – Rappler.com

Luisa Pineda is a member of the UP Marine Biological Society and a graduate of UP Diliman.

For those who are interested to join the organization and participate in their next events, check out the UP Marine Biological Society Facebook page.