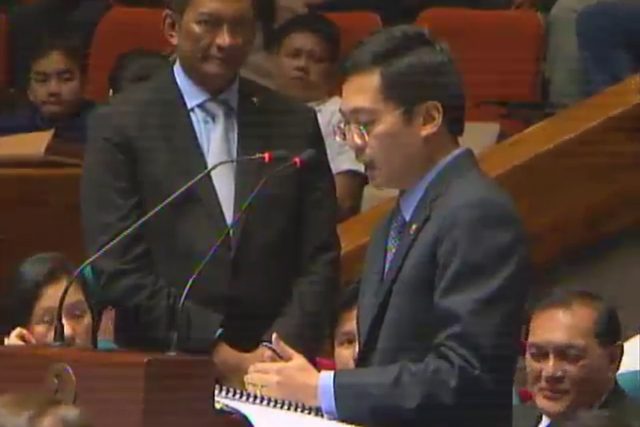 MANILA, Philippines – The chairman of the House committee on appropriations clarified on Thursday, September 29, that there are no lump sum appropriations in the proposed 2017 budget of the Department of Public Works and Highways (DPWH).

He said items under the National Road Network Services amounting to P1.079 billion ($22.3 million) were appropriated P25 million ($516,841) each, allegedly in the form of lump sums. “Where is the exact location of this project?” Roque asked.

Nograles said these are not lump sum appropriations. “These are items in the budget placed by the DPWH precisely to give them flexibility as these are mostly asset preservation,” he said.

“It is only within the course of the year that the DPWH will find out where these services are needed. You cannot identify these as lump sums. It is clearly identified where the funds will be spent,” added Nograles.

“It is impossible to determine precisely, with accuracy, because it is indeed impossible for the DPWH, or any person for that matter, to predict which section of which road will get destroyed in the course of 2017,” said Nograles.

Massive infrastructure upgrades are among the priorities of the current administration, but the DPWH’s absorptive capacity remains a problem.

Deputy Speaker Rolando Andaya raised this as a major concern. He cited the difficulty of hitting the 2022 target for infrastructure spending of 7% of the gross domestic product (GDP) due to the problem.

“The chair has asked for the new programs regarding absorptive capacity and the response that the chair got is early procurement activities and early awarding of contracts upon the receipt of allotments,” said the Camarines Sur 1st District Representative.

“Thank you very much for that candid answer but truth of the matter is, that has been the practice of the past two administrations so the concern has yet to be answered,” Andaya added.

Public Works Secretary Mark Villar said the absorptive capacity of the agency is currently at 50% but there are efforts to improve on this.

The proposed budget includes a P32.93-billion ($680.89 million) allotment for the Mindanao Logistics Infrastructure Network, which is seen to reduce logistics costs in Mindanao by improving linkage roads to key ports and other production areas.

Following the directives of President Rodrigo Duterte,  Villar has rolled out the 24/7 construction of key projects in urban centers nationwide. – Rappler.com