US show on Filipina mail-order bride cancelled after backlash 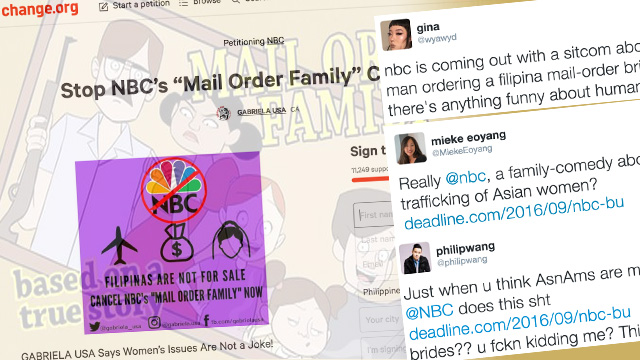 MANILA, Philippines – A new comedy series being developed by NBC Entertainment was cancelled September 30 (Saturday, October 1 in Manila), just two days after word of its development came out. This was after loud protests from the Asian-American community.

The show, ‘Mail Order Family,’ was about a widowed father who ordered a Filipina mail-order bride to raise his children. It was going to be produced by Jackie Clarke and Ruben Fleishcer, makers of the hit NBC series, Superstore.

The concept drew widespread criticism online as netizens pointed out that it highlights negative stereotypes of Filipinos in the United States.

Really @nbc, a family-comedy about the sex trafficking of Asian women? https://t.co/7YNrndEAh6

Just when u think AsnAms are making progress, @NBC does this sht https://t.co/9ynL6lI43L Mail-order brides?? u fckn kidding me? This passes?

A change.org petition to stop the show’s development was put up by Gabriela USA, saying that “exploitation and violence against Filipino women is not entertainment.”

According to the petition, the show is making light of the problem created by the mail-order bride industry which “exploits and trafficks women who are economically disadvantaged and living in poverty.” The petition has garnered more than 11,000 signatures as of writing.

Blogger Laura Sirikul also criticized the show, saying that it will “diminish all the progressive work done for Asians.”

“In a society where Asians are constantly whitewashed or placed in stereotypical situations, NBC should really reconsider picking up a comedy where there is human trafficking of an Asian woman into an unwanted marriage,” she wrote in her blog, Nerds of Color.

In a statement, an NBC spokesperson said that “the writer and producers have taken the sensitivity to the initial concept to heart and have chosen not to move forward with the project at this time.”

“We purchased the pitch with the understanding that it would tell the creator’s real-life experience of being raised by a strong Filipina stepmother after the loss of her own mother,” the spokesperson explained to NBC. – Rappler.com