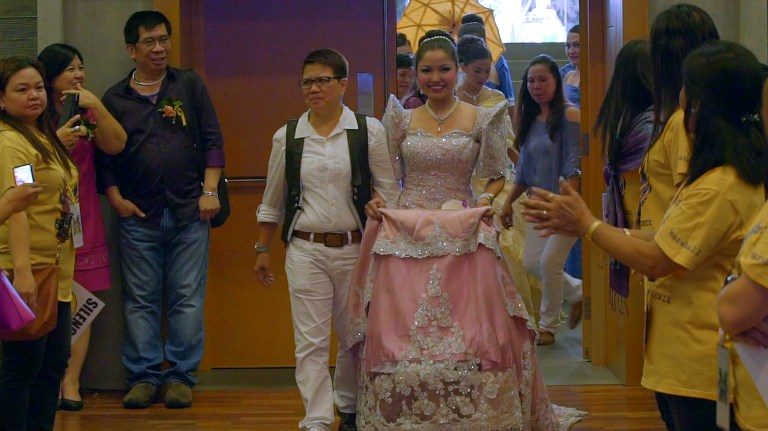 BUSAN, South Korea – A documentary that takes an intimate look at the daily dramas of foreign domestic workers has premiered at Asia’s largest film festival, with its director pushing a fresh perspective on the millions employed in homes across the globe.

“So much of what we hear and see about them is sensational or negative,” said Baby Ruth Villarama on the sidelines of the 21st Busan International Film Festival in South Korea.

“I wanted to show them living their daily lives, with their own hopes and dreams, and hopefully that will open up a dialogue about who these people are the role they play in the world today,” she said.

Villarama’s quietly engaging Sunday Beauty Queen is in the running for the major documentary prize in Busan and follows a group of foreign domestic workers in Hong Kong as they prepare to take part in an annual beauty pageant.

By shadowing their preparations for the event, while also getting a close-up look at their daily work routines and the interaction they have with their employers, the film gives rare voice to the worries the women have over such issues as job security, pay rates and the distance between them and their families back home in the Philippines.

“They work 6 days a week and yet they spend their only day off preparing and training for this annual event –- I wanted to know why,” said Villarama.

“The truth is that this event gives them a sense of identity. It’s about this dream to be happy, despite their struggles, and we are all looking for a happy ending in our lives.”

Although exact numbers from individual nations are hard to come by, the International Labor Organization estimates there are around 50 million overseas domestic workers employed globally.

They are a vital part of the Philippine economy, sending an estimated US$26 billion home each year – or around 10% of the country’s GDP.

Hong Kong employs an estimated 300,000 foreign domestic workers – the majority from the Philippines and Indonesia.

Villarama’s film comes at a time when there is unprecedented attention on their lives – both in that city and beyond – due to a number of high-profile cases of abuse by employers, including one that resulted in a six-year prison sentence.

But the Manila-based director said she was determined to avoid such controversies when charting her documentary’s narrative arc.

“I think audiences are looking more for stories that feed their soul a bit, and the best way to do that is to go into people’s individual stories and try to understand their journeys, rather than simply look for sensations,” said Villarama.

The winner of BIFF’s Wide Angle documentary competition will be announced when the 10-day festival comes to a close on Saturday, October 15. – Rappler.com