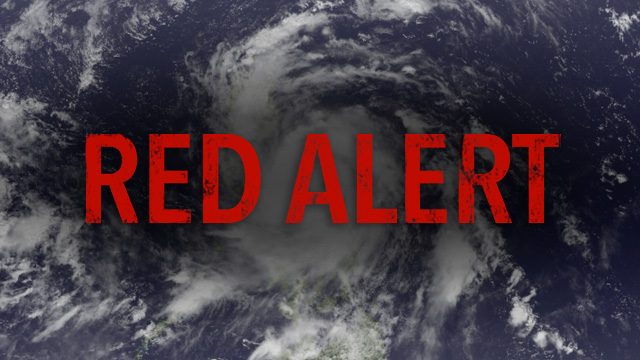 Red alert means all agencies under the NDRRMC and its offices in affected areas must report to their headquarters 24/7.

At the national level – even before red alert is declared – the NDRRMC also conducts pre-disaster risk assessment (PDRA) meetings to identify possible hazards and their effects on communities.

State weather bureau PAGASA has reminded areas in Karen’s path to be on alert. The typhoon is expected to make landfall in the Quezon-Aurora area between 5 am and 7 am on Sunday, October 16.

Department of the Interior and Local Government (DILG) Director Allan Tabell told Rappler that preemptive evacuations are ongoing in Quezon, Aurora, and Benguet, among others.

The NDRRMC added that several provinces in the Bicol Region, including Catanduanes, Sorsogon, Camarines Sur, and Camarines Norte, have been conducting preemptive evacuations. As of posting, 111 families or 447 people have evacuated in the 4 Bicol provinces.

The disaster management council also called on mining companies to suspend operations and ensure the safety of their workers, as Karen could bring landslides.

The Department of Social Welfare and Development (DSWD) has also prepositioned items and equipment, according to the NDRRMC.

Meanwhile, some 4,000 passengers are stranded in various ports in the country. – Rappler.com