Storm surge advisories up in Cagayan, Isabela due to Lawin 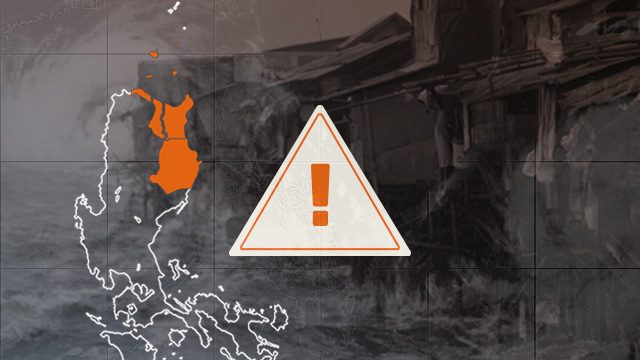 Facebook Twitter Copy URL
Copied
Project NOAH raises Storm Surge Advisory 1 in a number of municipalities in the two provinces, which are under signal no. 5

Cagayan and Isabela have both been placed under signal no. 5 – the highest tropical cyclone warning signal.

Several municipalities in the two provinces are under Storm Surge Advisory 1, which means there could be storm surges at least two meters or 6 feet, 5 inches high. (READ: How to know if storm surge threatens your area)

The following, in particular, are affected:

For those living in Isabela, check this simulation map from Project NOAH to see if your area will be affected:

Here is the simulation map for those living in Cagayan:

How to interpret the map

Different colors in the map represent different heights of flooding which could be caused by storm surges.

In a press briefing on Wednesday, Project NOAH executive director Mahar Lagmay said affected residents can use the map to determine where to go next if their area would be affected by storm surges.

As a point of reference so people can visualize the height of a storm surge, Project NOAH uses boxing icon and senator Manny Pacquiao as an example. Pacquiao’s height is 1.66 meters or 5 feet, 4 inches.

Red stands for high storm surge hazard, which means 1.5-meter floods or floods that will reach or go beyond the head. This is also the same level as Pacquiao’s nose, according to Project NOAH.

Orange means medium hazard or 0.5-meter flooding – water levels up to the thigh until the head. This is also the same level as Pacquiao’s waist to nose.

If your locality is not classified under the 3 colors, your area is deemed safe from storm surges.

Refresh this page for the next storm surge advisory from Project NOAH. – Rappler.com