Oct 27, 2016 10:24 PM PHT
Don Kevin Hapal
Facebook Twitter Copy URL
Copied
(UPDATED) 'I am so happy. This is what I had been praying for every night: to be with my family this Christmas,' Arnel Balbero says, surrounded by his 4 siblings at the airport 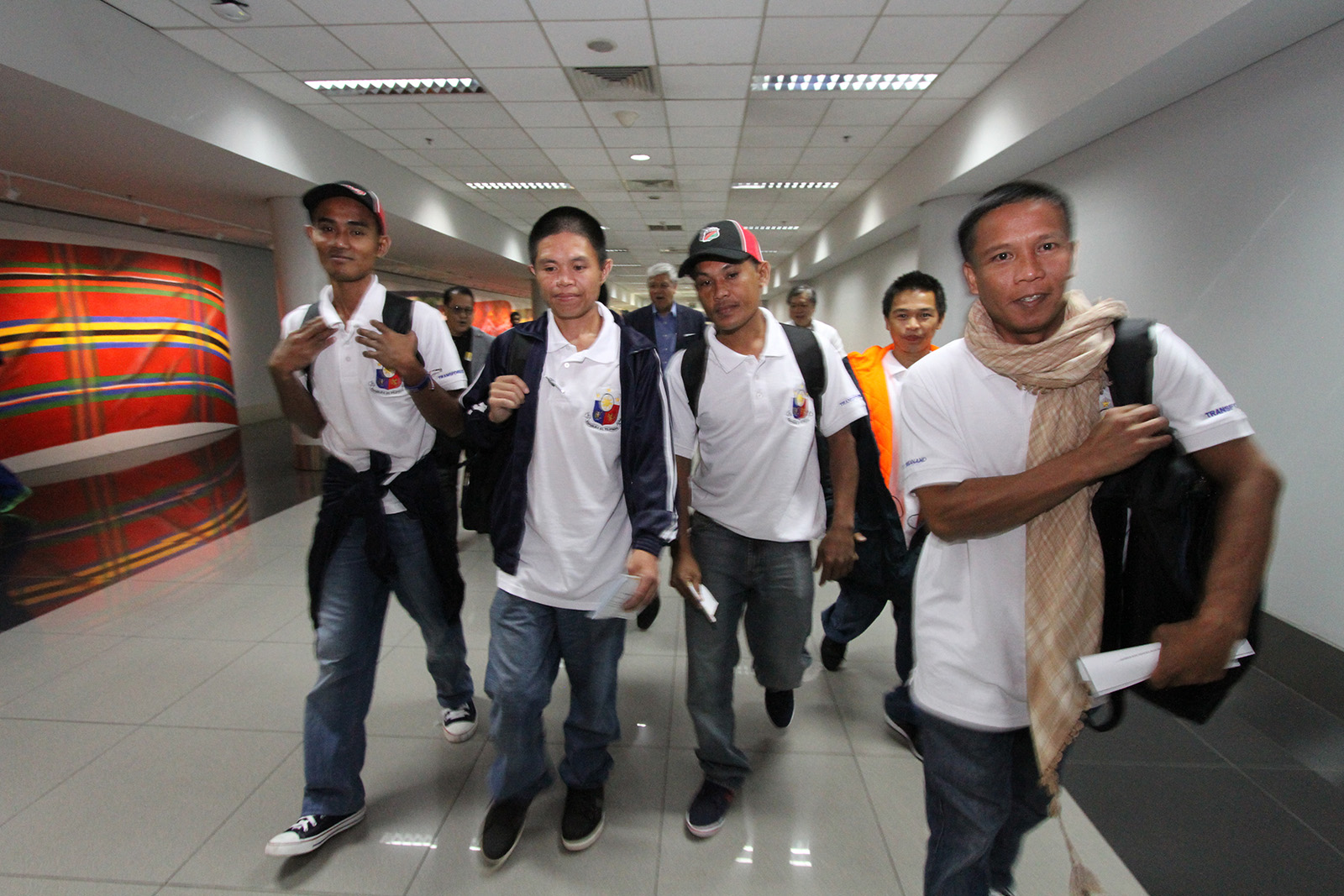 The Omani-flagged fishing vessel was seized by pirates in the southern part of Seychelles in March 2012, during the height of the region’s piracy scourge.

The Somali pirates freed 26 asian hostages, including the 5 Filipinos, on Saturday, October 22.

“I am so happy. This is what I had been praying for every night: to be with my family this Christmas,” Arnel Balbero said, surrounded by his 4 siblings at the airport.

His sister, Lilia, trembled at the sight of her brother. “It’s like a miracle. We never lost hope he would be freed,” she said.

Balbero’s cousin and fellow ex-hostage, Elmer, said the Somali pirates had cared little about the health of their captives.

“We asked the pirates for medicine but they did not give us any. Instead they said, ‘Where is your money?'”

The captives also said they suffered beatings at the hands of the pirates.

“In our first week, they called it our introduction. They used bamboo to beat us”, said Arnel Balbero.

To survive, the Filipinos did chores for their captors, washing their clothes and even their weapons.

“We took it as a chance to also wash. We couldn’t take a bath often because they only gave us a litre of water each day,” Elmer Balbero said.

Hugging his two teenage daughters, Elmer said it was thoughts of seeing his family again that kept him going throughout the ordeal.

“I did not even recognize them,” he said of his children. “When I left they were still so small.” 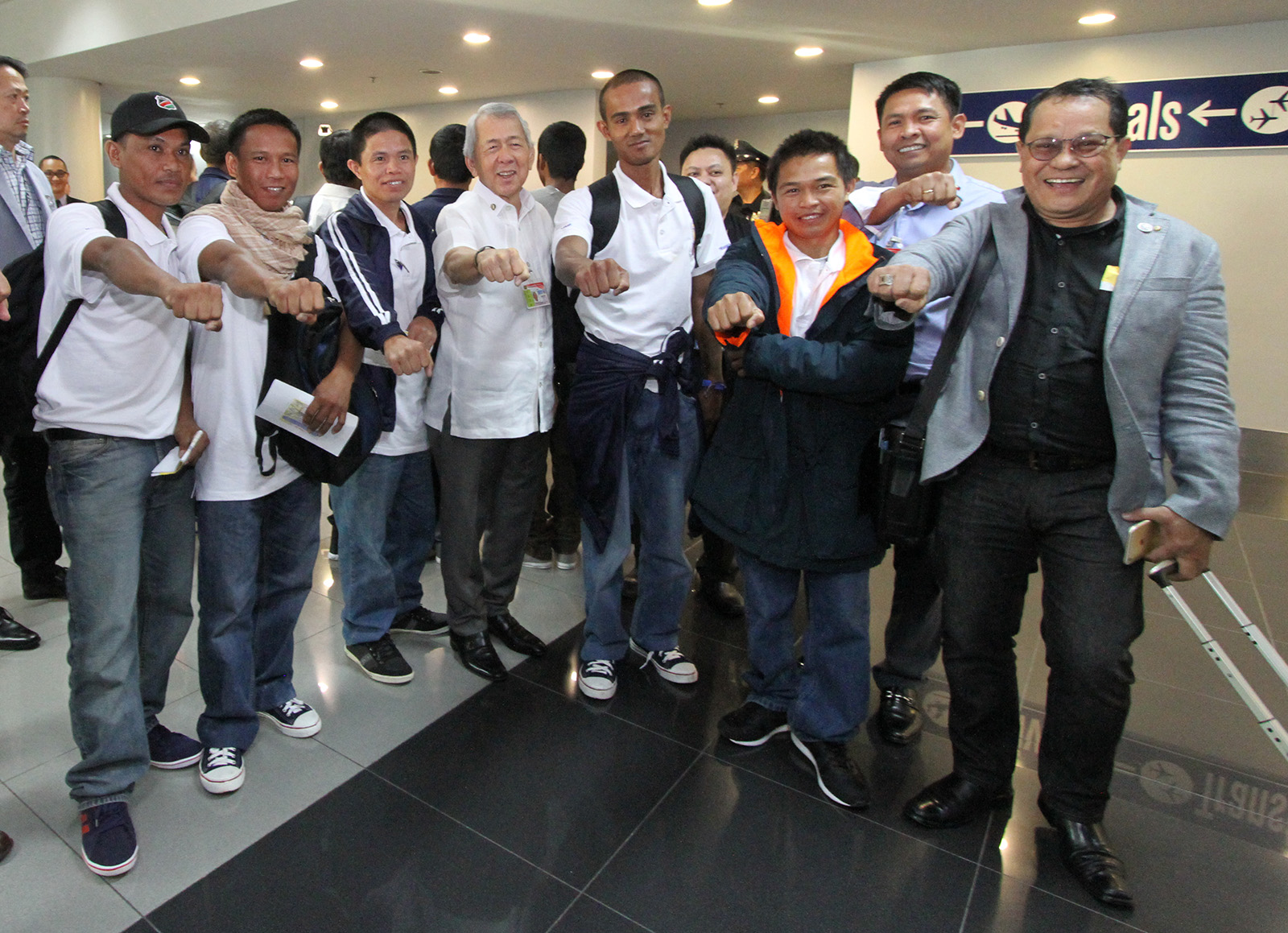 According to OWWA Officer-in-Charge Carmelina Velasquez, the seafarers will be accorded assistance by the OWWA Repatriation Team upon arrival at the airport and will be provided accommodation.

OWWA’s assistance to the repatriated Filipino seafarers will also include transportation to their respective hometowns, where they will also be recommended to undergo psycho-social counseling as part of their healing process.

“We imagine the nightmare that our kababayans went through all those times, so much so that we wish that they, together with their families, will be able to  adjust and be back to their normal lives.  We are thankful that they at last, are able to come home safely,” OIC Velasquez said.

The release of the crew from Cambodia, China, Indonesia, Philippines, Taiwan, and Vietnam was negotiated by the Oceans Beyond Piracy (OBP).

OBP said that pirates initially took 29 crew hostage, but one person died during the hijacking, and two more “succumbed to illness” during their captivity.

Shen Jui-chang, a Taiwanese who was among the hostages freed, told reporters that they were forced to eat mice, scorpions, and centipedes to survive.

“Every day was nerve-wracking, with the pirates pointing their AK-47 rifles at me 24 hours a day,” he said. – with reports from the Agence France-Presse/Rappler.com