In Vegas, Fil-Ams mobilize to get out the vote for Hillary

Nov 8, 2016 11:00 AM PHT
Ryan Songalia
Facebook Twitter Copy URL
Copied
In battleground Nevada, Fil-Am volunteers believe Asians can go from being marginalized to being the margin of victory for Hillary Clinton 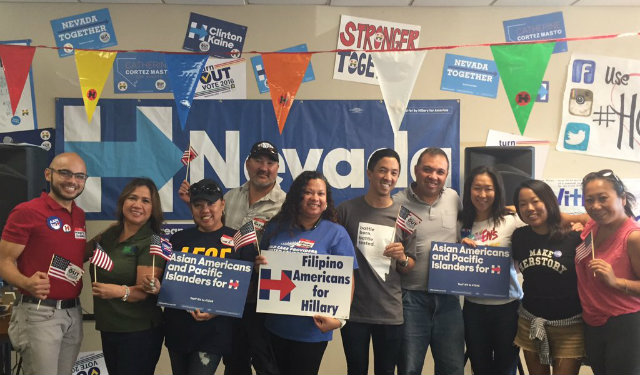 LAS VEGAS, USA – You have to be a morning person.

That’s one of the prerequisites to volunteering for the Democratic Party, says Vivian Rudolph, an organizer from the American Federation of Government Employees (AFGE) union district 12, as she looks over a map for an apartment complex in Henderson, a residential area far from the Las Vegas strip in the voter-rich Clark County.

It’s Monday, November 7, and with less than 24 hours before Election Day, Rudolph and several hundred other volunteers under the American Federation of Labor and Congress of Industrial Organizations (AFL-CIO) are in Nevada, a battleground swing state with 6 electoral votes which has sided with the eventual winner of the last 9 presidential elections. (READ: US politics 101: The American political system explained)

The days start at 9 am and can last 10-12 hours, and include voter canvassing, or knocking on doors to remind people that E-Day is coming up, and then calling phone banks when the sun goes down to reach others whom they hadn’t met in person. Just the day before, Rudolph estimates that she and two other volunteers knocked on 200 doors between them.

For those who aren’t home, they leave literature at their doors encouraging voters to support Hillary Clinton, aiming to become the first female American President, and Catherine Cortez Masto, a former Nevada Attorney General trying to become the first Latina elected to the Senate. Masto is locked in a tight race with Congressman Joe Heck, a Republican, for control of the seat held by the retiring Harry Reid.

After knocking on several doors, a man in his late-20s who identifies himself as being with the complex’s front office calls our attention. “Are you guys campaigning? Normally it’s not allowed but I’ll let you do it this time,” he says before asking, “You’re for Hillary, right? OK then you’re cool.”

Rudolph, a Filipina-American who was born in Bicol in the Philippines and is now based in San Diego, is well-equipped with Tagalog in case the situation calls for it. And for Gregory Cendana, another volunteer and the executive director of the Asian Pacific American Labor Alliance (APALA), sometimes speaking the voters’ language can take on a literal meaning.

“Sometimes it’s not just about the issues. They see you out in the sun and want to know what compels you to volunteer,” says Cendana, whose organization represents 660,000 Asian-American and Pacific Islander (AAPI) union members and offers voter assistance in Mandarin, Cantonese, Korean, Vietnamese, Tagalog, Urdu, Hindi and Bengal, according to their Twitter account.

“When that person shares your same background, experience or language, there is more opportunity to engage.”

The numbers that count 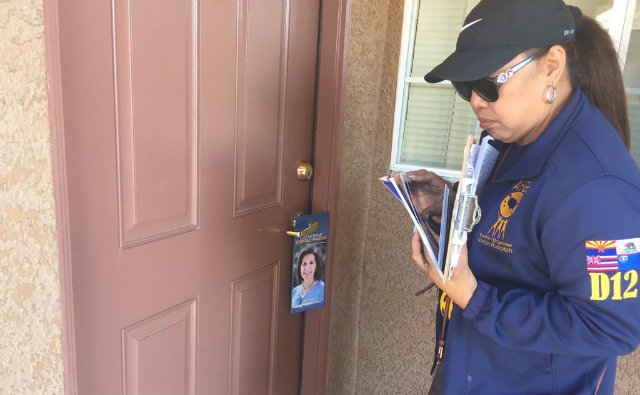 On television, democracy in action may appear like super-surrogates stumping on the campaign trail before thousands of supporters and increasingly negative ads which run back-to-back among dueling candidates, but an election is won as much on the ground as it is on the debate stage. That’s why Cendana and his associates have spent much time helping get people out for early voting to avoid long lines, and registering new voters to the tune of 3,000 in this cycle alone, he says, with half of them being Filipino-Americans in the Las Vegas region.

“People say ‘Well we’ve seen so many yard signs here’…It’s an important reminder that until you actually go to the ballot box and actually cast those ballots, those are the numbers that actually count,” says Cendana.

I first meet Cendana at his hotel just off the Vegas strip. He walks in wearing a black t-shirt with the words “Black Lives Matter” written on it in many different languages with a button that reads “FilAms for Hillary Clinton for President” attached, and a full beard which contrasts with his shaven head. A UCLA grad, he once performed with a hip hop dance group back home and still dreams of joining another one in Washington DC where he now lives.

“My vision [for a Clinton presidency] would be that there would be Filipino-Americans represented at all levels of the administration, secretaries in her cabinet all the way down to all levels,” says Cendana, who has also aided close races in Pennsylvania and North Carolina in recent months.

“My vision is also that there is an ongoing effort to engage our communities, inclusion of Filipino Americans on the president’s commission on Asian Americans and Pacific Islanders. Even other boards and commissions as well because we know that all of the different issues impact us in different ways and so to ensure that our voices and representatives are at the table helping make important policy decisions and continue to have ongoing access in terms of getting updates and also making sure we hold her accountable to some of her promises that she’s made during the election season.”

The prospect of victory by Clinton’s rival, Donald Trump, is a thought which inspires as much fear to Cendana and his associates as Clinton’s does optimism. While Clinton promises to introduce comprehensive immigration reform in her first 100 days in office and provide a pathway to citizenship for undocumented immigrants, Trump’s campaign has been built on promises to deport millions of undocumented immigrants, ban Muslims from entering the United States and to build a wall along the Mexican border.

“That’s a very scary thought. That thought actually makes me want to cry,” said APALA national president Johanna Hester about a Trump presidency. Hester, who was born in Las Piñas, Metro Manila, but has lived in the United States since she was 15, is the highest ranking Asian-American officer in the American Federation of State, County and Municipal Employees (AFSCME).

The 2016 National Asian American Survey released last month concluded that Asian Americans are more than twice as likely to identify as Democrats than Republicans, with Clinton being viewed as having a “high net favorability” and Trump being viewed “very unfavorably.” In a two-party race, Clinton has a nearly 4-to-1 edge over Trump (55% to 14%) according to the same survey with 1-in-5 identifying as undecided.

Still, Filipino-Americans comprise the largest percentage of Trump supporters among Asian-American registered voters according to the same poll, with 32% saying they would  vote for Trump while 62% said they’d vote for Clinton. (READ: US Pinoys for Trump)

According to a 2015 story in the Las Vegas Sun, approximately 215,000 Asians reside in Nevada, and half of the Asians in Clark County are Filipinos. That factor could determine which way the state goes, and potentially the election itself.

“In Nevada the Asian American Pacific Islander community actually grew 110% over the last decade, and Filipino-Americans are actually a big percentage of that growth,” said Cendana. “We’re about almost 10% of the electorate here, so we can go from being marginalized to the margin of victory.” – Rappler.com