Nov 14, 2016 3:55 PM PHT
Happy Feraren
Facebook Twitter Copy URL
Copied
How can the public use technology and social media to fight corruption? Find out as the #NotOnMyWatch caravan runs in Iloilo City from November 18 to 19!

MANILA, Philippines – Corruption remains a big problem in the Philippines, even though the government has been vocal about fighting it. Corrupt practices are still taking place down to the grassroots level, and in some cases, are so rampant that they are more the norm than the exception.

The aim of the #NotOnMyWatch campaign is to encourage local communities to join the fight against corruption. After a successful run in Cebu City, the anti-corruption caravan is set to run in Iloilo City from November 18 to 19 at the University of Iloilo. 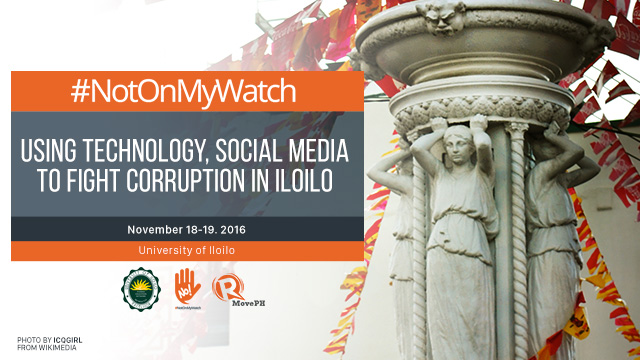 #CorruptionPH : A closer look at Iloilo

Based on a 2016 Social Weather Stations (SWS) survey, 67% of surveyed businessmen in Iloilo said there is “a lot of corruption in the public sector.” It was the highest rating given among the areas surveyed this year, equal only to the rating of the National Capital Region (NCR).

Rappler launched the #NotOnMyWatch campaign on September 24 during the annual Innovation+Social Good Summit. The aim of the campaign is to promote integrity, competence, and accountability in government by encouraging people to report bribery and other grievances against government officials while showcasing honest and commendable service.

On the first day in Iloilo – Friday, November 18 – select participants will go through a whole day workshop to be integrity champions. They will be expected to help spread the word on how to report corruption accurately and how to find and validate sources of information.

On the second day – Saturday, November 19 – there will be a public forum with representatives from the government, civil society groups, and students. The forum aims to tackle local corruption issues in Iloilo and what ordinary citizens can do to help solve these – particularly with the use of technology and social media.

How to join the anti-corruption caravan in Iloilo

Interested participants can join the forum by registering below:

For the validation workshop, limited slots are available for groups or individuals interested in pursuing the anti-corruption advocacy in their own communities or government offices. You can email notonmywatch@rappler.com to reserve a slot.