Nov 19, 2016 2:00 PM PHT
Facebook Twitter Copy URL
Copied
The rally in Cebu is one of many post-Marcos burial protests scheduled to happen until November 30 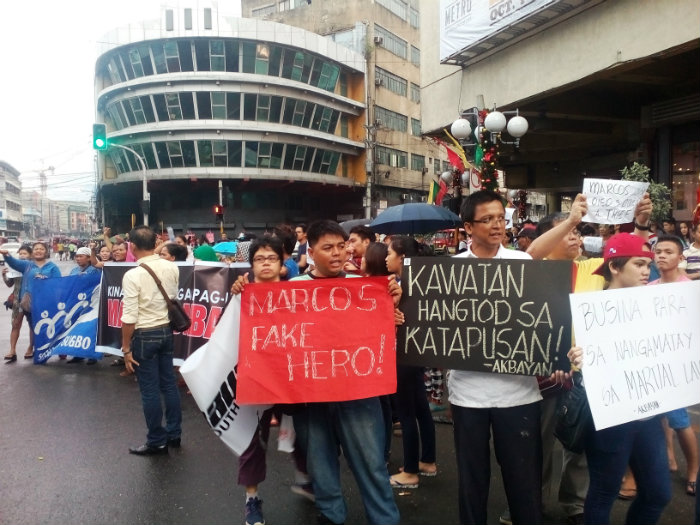 The rally in Cebu was one of many post-Marcos burial protests scheduled to happen until November 30.

In Manila, thousands of protesters also gathered at the People Power Monument along EDSA after the surprise burial of Marcos at the Libingan ng mga Bayani.

Emalyn Aliviano, spokesperson of the Kilusan para sa Pambansang Demokrasya, expressed her disappointment over the Supreme Court’s decision, claiming that the verdict was legally and politically wrong. According to her, it also violates the Constitution.

(This is legally insane because they haven’t finished entertaining the motion for reconsideration. It’s been 10 days since the decision of the Supreme Court and then they had Marcos buried.)

Aliviano added that she was dismayed by the presence of the Armed Forces of the Philippines (AFP) and the Philippine National Police (PNP) as they attended to Marcos’ remains.

Meanwhile, Justine Balane of Akbayan Youth Cebu described the late president’s burial as sensitive, sneaky, and illegal. He even argued that President Rodrigo Duterte mobilized and enabled the AFP and PNP to join the burial.

(Even President Duterte managed to mobilize the AFP and PNP to be at the burial. The Palace cannot just claim that they were also surprised. President Duterte is the reason why the hero’s burial for Ferdinand Marcos was granted.)

Balane also reminded the public to always look back at the past, reminding everyone of the “real heroes” who fought for the the rights and freedom the nation enjoys today.

There were also simultaneous rallies held in Bacolod City at the Fountain of Justice and in Palawan at the provincial capitol. – Rappler.com