Facebook Twitter Copy URL
Copied
(UPDATED) 'This is about restoring the trust and confidence of the general public to the government and the agencies that serve the people,' says one panelist in Rappler's anti-corruption forum in Iloilo

MANILA, Philippines (UPDATED) – Fighting corruption is no easy task. However big or small, wrong and unlawful acts should be reported and the perpetrators made accountable for their actions.

These were among the messages conveyed to attendees of Rappler’s #NotOnMyWatch anti-corruption forum at the PHINMA University of Iloilo on Saturday, November 19.

In a panel discussion, JJ Cordova of the Jaro Archdiocesan Social Action Center (JASAC) cited his previous experience at the old Iloilo City Hall when he needed documentary stamps for his documents.

“How much was the monetary value of the stamps? P15… you don’t even need a receipt to tell you that because it’s printed on the stamp itself,” recounted Cordova.

However, he was charged P20, or P5 more than the actual value. With him needing 20 documentary stamps, he would be paying P100 in excess.

Cordova called the attention of the employee collecting the fee, “but she shouted at me and said, ‘Go home! That’s none of your business. We get those from the BIR (Bureau of Internal Revenue), resell them, and divide the income.'”

He was able to raise the matter to a department head. The employee, he said, then returned the excess money.

Cordova experienced it again when he applied for police clearance, but with him being charged P25 for the documentary stamps, or P10 more than the actual fee. He likewise raised the incident to higher officials, who apologized.

“These may seem to be minor incidents, but our response… starts from the very small things to the bigger ones,” said Cordova. “We believe in JASAC that the fight against corruption should begin with people’s values. The change should start from the bottom up, so our approach starts from the barangay level up to the higher levels.”

“This is about restoring the trust and confidence of the general public to the government and the agencies that serve the people.” 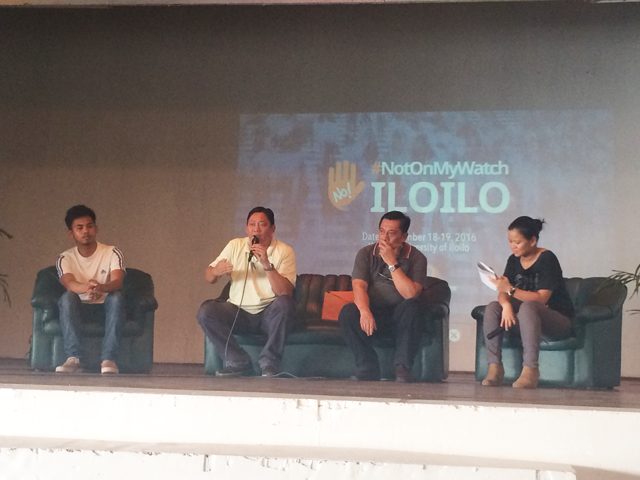 Two other local panelists likewise shared their advocacies versus corruption in Iloilo City.

Rex Donasco of the Association of Stall Owners & Transient Vendors raised his concern about the city’s planned revitalization – or in his words, privatization – of the Iloilo Central Market, a heritage structure.

He also mentioned some corrupt practices happening in markets, like the presence of “tuklo” (thieves or burglars) and the use of “recycled” receipts to double-charge “arkabala” (rental fees) from some stall owners. (RELATED: #NotOnMyWatch: List of Iloilo execs punished for corruption)

For his part, JC Alejandro of the Kabataan party list reported that the city government supposedly “rechanneled” a P360-million loan meant for school-building projects. He also said that an amendment to a perimeter boundary ordinance has reportedly affected commuters and students using public transportation.

To prevent corruption from happening, Donasco told the students, “You have to be watchful… You have to dream, you have to have courage.”

Alejandro added that the youth has a role to expose these corrupt acts, and “to speak on behalf of those who cannot speak.”

“It is us who could participate democratically through social media or through offline activities most importantly, because we are among the loudest voices in society,” Alejandro said.

“We must do all our best together to stop corruption and to stop all forms of harassment to those who question the orders prescribed here in Iloilo City.”

Rolando Soliven, vice president for group corporate assurance of PHINMA Corporation, talked about their efforts to combat corruption, like holding integrity roadshows across companies under PHINMA.

“Integrity is something that isn’t manufactured. It’s something you work hard for,” said Soliven.

PHINMA is one of the signatories in the Integrity Initiative, a multisectoral campaign against corruption.

The forum was also attended by regional officials from the Office of the Ombudsman, the Civil Service Commission (CSC), and the Commission on Audit (COA). In a separate panel discussion, the officials shared their respective agencies’ ongoing strategies to eliminate corruption in government.

The CSC, for instance, conducts Report Card Surveys in nearly 400 government agencies to measure their level of compliance with the Anti-Red Tape Act, said Leo Jamorin, officer-in-charge of the CSC’s Public Assistance and Liaison Division in Region VI.

Jamorin also mentioned the 8888 hotline, which receives citizen complaints on the services of government agencies. “We at the CSC and Rappler are working together to increase the level of the citizens’ engagement, and at the same time, help government agencies in identifying what are the gaps and opportunities for improvement in their service delivery,” he added.

The Office of the Ombudsman, for its part, holds seminars for government officials and employees on integrity, transparency, and accountability, said acting regional director Pio Dargantes. The office also has a Campus Integrity Crusaders program involving students. Rappler was in Iloilo City for the second leg of a caravan to promote its anti-corruption campaign.

On Friday, November 18, students and government officials joined a reporting workshop where they learned how to gather and substantiate reports of corrupt activities.

The #NotOnMyWatch reporting platforms on Facebook Messenger and at www.fightcorruption.ph were also demonstrated during the workshop and on Saturday’s forum.

Below is an example of the form where netizens can report:

To show their commitment to fight corruption, the participants posted their pledges online on Twitter and Facebook using #NotOnMyWatch, as well as offline through Post-it notes on the Not On My Watch freedom wall.

Read some of their pledges against corruption below.

The #NotOnMyWatch caravan will head to Cagayan de Oro City on November 25 and 26, and to Laguna on December 1 and 2. – with Russel Patina/Rappler.com