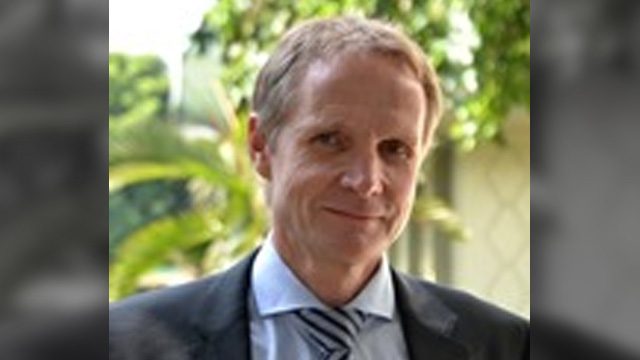 MANILA, Philippines – The World Health Organization (WHO) representative in the Philippines said the country needs to do more to curb the human immunodeficiency virus (HIV) epidemic on Tuesday, November 29.

“Obviously, year from year, we have more and more infections that are diagnosed in the country. We are seeing more transmissions of HIV. So no, we are all together, we are not doing enough,” Dr Gundo Weiler said in an event commemorating World AIDS Day on December 1.

Weiler added that the continuous spread of HIV is a collective failure of government and civil society institutions.

“(There) is no one agency that can fix it alone. The Department of Health (DOH) cannot fix it alone. We all have our ole to play,” Weiler said.

The WHO representative made the remarks during the launch of the pre-exposure prophylaxis (PrEP) program – a new measure to stop new infections – by non-profit LoveYourself inc.

PrEP is a daily pill that can be taken by people without HIV as an additional tool for prevention. It is a combination of tenofovir and emtricabine which lowers the chances of contacting the virus. Weiler noted that it would take a multi-sectoral approach to counter the spread of the virus in the Philippines, which has one of the fastest growing HIV epidemics in the world.

“I do believe we need a massive mobilization of the whole country against the HIV epidemic,” he stressed.

According to the Department of Health (DOH), around 25 people get HIV in the Philippines every day. If the epidemic is not curbed, the number of people living with HIV (PLHIVs) may reach 133,000 by 2022, the health department said.

At the center of the epidemic are adolescents, males having sex with males (MSMs), and the LGBT community.

“t’s not magic to have safer sex. LGBT communities and MSM communities don’t need to be told what to do. They have to be completely capable to mobilize themselves and to take their right to health and positive sexuality in their own hands,” Weiler said.

He added: “It is the responsibility of all partners to make sure that the partners are empowered to do so.”

“There is really no one magic bullet for HIV prevention. HIV is a multi-facted, multi-dimentional problem. No one solution can stop the spread in the country. You have to attack it in all aspects because there are so many social and medical factors that would influence the spread of HIV,” she added.

Weiler concluded: “I think we all can do more…to empower the communities. There are many partners who can contribute. I hope and I am confident that if we all mobilize, we can turn around the epidemic in this country as has been done in many other countries.” – Rappler.com