MANILA, Philippines – How do we fight corruption?

If you ask those who attended Rappler’s #NotOnMyWatch caravan in Sta Cruz, Laguna, they will say it is by increasing our vigilance and being armed with accurate information.

Students, local sectoral groups, and government officials got together on Thursday and Friday, December 1 and 2, at the Asiablooms Hotel to exchange ideas on how to end the menace of corruption.

In one of the sessions, Commission on Audit (COA) supervising auditor Ethel Gervacio shared that there is a COA regulation requiring local and national agencies to publicize information on their projects, including those under the bottom-up budgeting (BUB) scheme.

There should be signboards posted where the projects are, she added, containing details like the implementing agency, the contractor, the project cost, and the date of completion.

Gervacio then invited the public to take photos and report discrepancies in project implementation, based on the details outlined on the full disclosure signboards.

“Sa simpleng paraan, pwede po tayong makatulong na ipaabot sa awtoridad para ito ay mabigyan ng kaukulang aksyon,” she said. (In a simple way, we can help report these to authorities so that they could act on it appropriately.) This is similar to COA’s transparency initiative called the Citizen’s Participatory Audit (CPA), which likewise involves the public’s help in checking government projects.

“This is based on the premise that public accountability can prosper only with a vigilant and informed citizenry. Tayo po ito. [Kapag] nandiyan ang information pero wala tayong aksyon, walang saysay,” she said. (This is us. If the information is there but we don’t take action, it is pointless.)

Gervacio urged the public, especially those who report anonymously, “Makakatulong po kayo sa amin (You can help us). Give us complete information.”

Citizens should also look out for ethics violations by public officials.

Vitug mentioned previous reports where some elected officials live lavish lifestyles beyond their means, do not avoid conflicts of interest, receive gifts or favors, as well as lie about their educational background.

In other countries, the discovery of these actions would merit the officials’ swift resignation or dismissal from service, said Vitug.

Weak accountability and transparency mechanisms, the public’s high tolerance for ethics violations, and light or non-existent sanctions against these acts all contribute to letting these kinds of wrongdoings go unpunished in the Philippines, she added.

“We [should] demand more from our public officials because we pay their salaries through our taxes,” Vitug said. “That’s why we have a right to let them know that we’re watching them.” 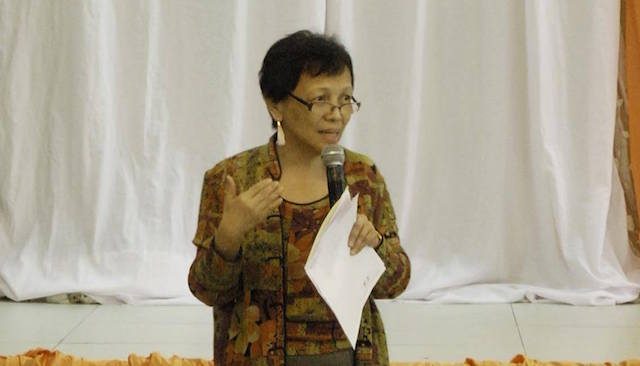 She then mentioned some laws that govern the conduct of public officials. Republic Act 6713 lays out the code of conduct and ethical standards, while Republic Act 3019 lists down corrupt practices and hands out punishment to errant officials.

“Ethical leadership is the foundation of good governance,” said Vitug. “Public officials’ compliance with ethical standards should be improved.”

In addition, she urged the public to be more discerning and be more careful with what they read online or on social media. “Fight fake news and lies. We should stand up for the truth.”

Using social media as a tool in fighting corruption also took the spotlight in Rappler’s 4th stop in the #NotOnMyWatch caravan.

Through www.fightcorruption.ph and via Move.PH’s Facebook Messenger bot, online users can report corrupt activities and provide evidence, with an option to remain anonymous or withhold their identities.

Netizens may also report via the form below:

Students from the AMA University-Sta Cruz Campus and the Laguna State Polytechnic University attended both activities, as well as Laguna fisherfolk and members of local transport groups and women’s groups.

Francisco Carandang of the Municipal Fisheries and Aquatic Resources Management Council-Los Baños, and Ric Abina of the federation of tricycle operators and drivers associations (TODA) in Laguna even shared the typical cases of corruption they experience in their respective communities.

Pakil town Vice Mayor Melody Cabañero-Familara and representatives from the Office of the Ombudsman and disaster risk reduction and management (DRRM) offices in the province likewise participated.

To highlight their commitment to the fight against corruption, participants posted their pledges online using #NotOnMyWatch.

“I will influence people to join me, I’ll influence them to be more vigilant and be accountable. Change begins with ourselves,” said student Alia Janiel Sultan on Facebook.

Here are other #NotOnMyWatch pledges:

The #NotOnMyWatch caravan has had successful runs in the cities of Cebu, Iloilo, and Cagayan de Oro. – Rappler.com