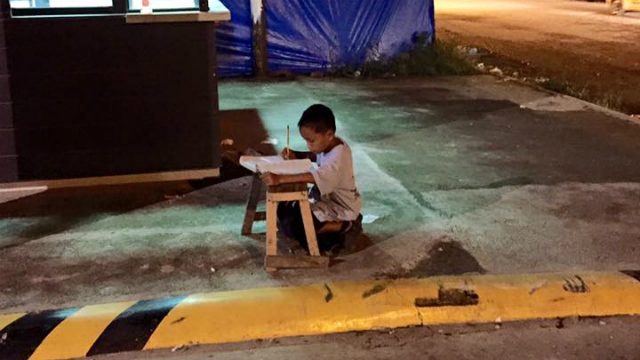 Facebook Twitter Copy URL
Copied
Daniel Cabrera, now 11, was captured in an inspiring viral photo in 2015 while studying outside the fastfood chain's branch in Mandaue City at night. Watch the video here.

MANILA, Philippines – The street child whose photo while studying outside McDonald’s in Mandaue City at night became viral is now featured in the fastfood chain’s online advertisement.

The advertisement, which runs for 3 minutes and 20 seconds, retells the story of Daniel Cabrera and how it inspired college student Joyce Torrefranca, who took the picture and posted it on Facebook, where it became viral and connected donors to the child and his family.

The advertisement ends in a touching reunion between Torrefranca, Cabrera, and his mother.

“As a student, it gave me an inspiration to work harder. I’m fortunate my parents were able to send me to school. I seldom go to coffee shops to study, but this kid just hit me. You really don’t need much, you just have to be determined and focused on the things that you want to achieve,” Torrefranca told Rappler back in 2015.

Cabrera, now 11 years old, is currently in 4th grade at Subangdaku Elementary School. He and his family no longer live in the streets of Cebu. They now have a house and a reliable source of income. (READ: #InspireCourage: The education of Daniel Cabrera)

MovePH, Rappler’s civic engagement arm, looked for Cabrera after the image went viral. When it found Cabrera and his family, it linked them up with Dilaab Foundation, the Solidarity and Communion Committee (SCC), and the Ugnayan nga Barangay at Simbahan (UBAS), which are local groups helping street children in Cebu.

MovePH and its partners in Cebu also launched a campaign to help Cabrera. (READ: Can you help this kid studying on Cebu sidewalk?)

The call for help inspired many netizens to help Cabrera and other street children. One of them, Bayanihan Project, launched a crowdfunding effort which surpassed its target amount more than 4 times.

Brown said that the boy’s viral image “encapsulates the great paradox of global education today: more young people than ever before realize the importance of the right to education but too few adults are making that right into a reality.” – Rappler.com.