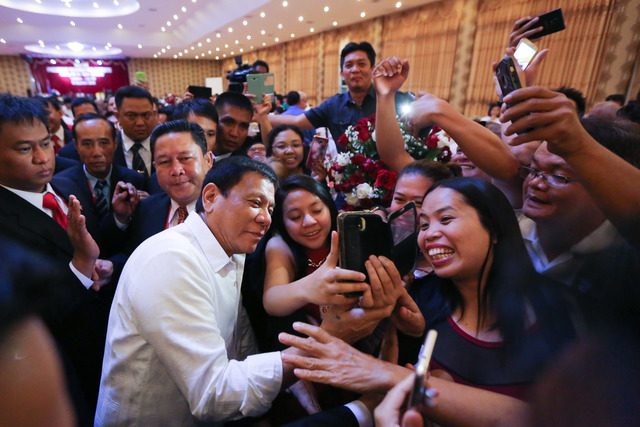 Facebook Twitter Copy URL
Copied
Officials say they are expecting up to 60,000 Filipinos to attend the meet and greet with President Duterte

Reliable sources from the Philippines and the local Filipino community revealed that plans are already in place for the president’s visit to the Middle Eastern country, where he won by a landslide in overseas absentee voting last May.

In an interview with The Filipino Times, Cortes said a stadium with a capacity of up to 30,000 people is being eyed for his visit.

“The Filipino community is working as early as now on the logistical arrangement for the proposed (visit) of PRRD,” Cortes said.

“We are setting in motion committees to work out the venue, security registration, program, technical requirements and everything related to the meeting,” he added.

Dubai is one of places around the world with the largest concentration of overseas Filipinos at approximately half a million, next only to Saudi Arabia and Hong Kong.

Officials privy to the ongoing preparations said they are expecting up to 60,000 Filipinos to attend the event.

“A community leader said we could get a huge venue that would accommodate all those who wish to see, meet and hear the president speak, which would mean that it is large enough to hold a huge crowd… majority of the over 500,000 Filipinos in Dubai who voted for the president,” said Cortes.

Duterte is currently in Singapore on a scheduled two-day visit. He was in Cambodia prior to his Singapore trip.

Mar Roxas, the former administration’s bet got the second highest votes but was still far behind at 3,985. The late Sen. Miriam Defensor- Santiago got 3,483.

Duterte followers in the UAE are upbeat about the news, with The Filipino Times’ Facebook post on the matter generating 2,500 likes, 925 shares and a reach of around 152,000 people two days following the  posting. Comments were mostly about praises that the president may be coming to UAE on a visit.

“My whole family will see you soon Mr. President,” said Checklet Robert. “Sana wala kaming masyadong customer para makita naman naming si tatay Digong,” wrote Janna Torres Bacha. (We hope that we don’t get too much customer so we get to see you.)  – Rappler.com