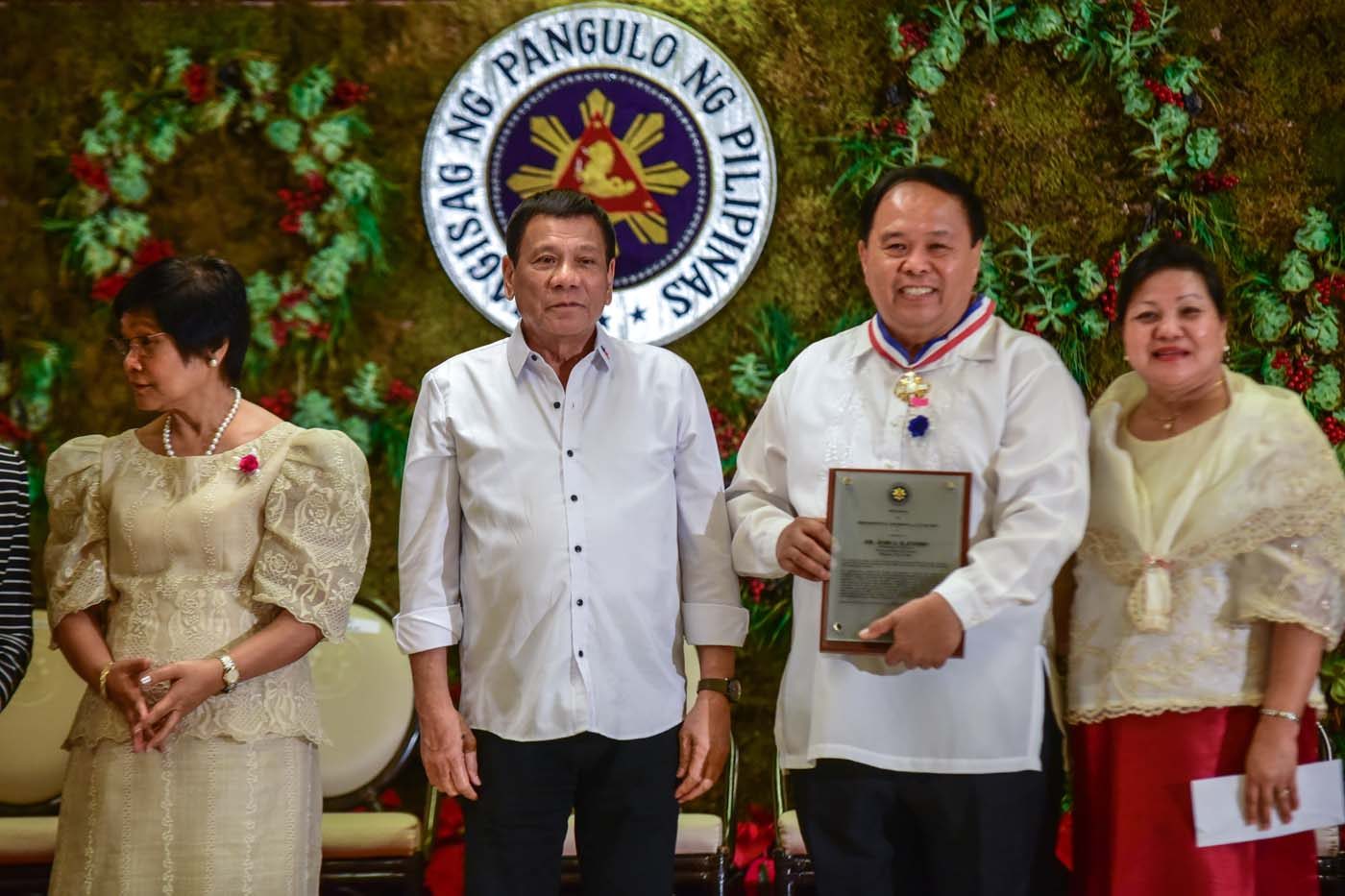 MANILA, Philippines – There’s no shortage of good service in government.

From teachers and professors who extend education beyond classroom walls to local officials and repairmen who go above and beyond their duties, they overcame challenges and exhibited innovation all in the name of serving their fellow countrymen.

The Civil Service Commission (CSC) through its Honor Awards Program recognized this year’s batch of outstanding public servants, composed of 15 individuals and 4 groups. They were feted on Monday, December 19, in a ceremony at Malacañang Palace.

In conferring the awards, President Rodrigo Duterte thanked the exemplary government workers for going the extra mile in serving the public. (READ: Public servants recognized for outstanding work in gov’t)

Meet the recipients of the 2016 Presidential Lingkod Bayan, Dangal ng Bayan, and CSC Pagasa awards below. Citations for the awardees are from the CSC.

For being the catalyst in the transformation of VSU as a premier educational institution in the field of instruction, research and extension, and technology transfer.

He aggressively pushed for faculty development, sending 56 instructors to graduate programs under local and international fellowship grants. He also pursued a P14-million aid from the Australian Center for International Agricultural Research in 2014 to fund research scholarships and the modernization of VSU research facilities and equipment.

In addition, instead of recording a decline in enrollment after Typhoon Yolanda, VSU saw a 125% increase, with Dr Bacusmo leading the efforts to secure scholarship grants for 5,632 students who were about to quit school, thus earning from students the title, “Student Champion.” For being a key player in addressing malnutrition, resulting in the decrease of the child mortality rate in the country.

He pushed for the implementation of food fortification programs and nutrition intervention strategies, such as the Malnutrition Reduction Program, which addressed macronutrient deficiency in children and mothers. He also led the development of a multi-nutrient growth mix (MGM) to increase the nutrient intake of infants and young children, as part of the Philippines’ commitment to the Millennium Development Goals. For creating the ripples of change that transformed the lives of the B’laan community in Malita, Davao del Sur.

She made education more accessible to the B’laan, opening primary schools and translating alternative learning system (ALS) modules to the B’laan dialect. She traversed rugged terrains to reach the 4 learning centers that she handles, and devoted her extra time teaching students.

Her efforts resulted in the increase of the number of passers in acceleration exams and a 600% rise in the literacy rate. She also batted for better social services for the Lumad and initiated livelihood programs to help increase their income. For his dedication and commitment to service, unselfishly sharing his expertise in aircraft engine repair and maintenance.

MSg Perez is responsible for the high operational rate of the Armed Forces of the Philippines’ (AFP) 37 UH-1H/1D units, aircraft used in times of national emergency, disasters, and other calamities. Because of his diligence, aircraft are in full mission capable status, and pilots trust their airworthiness.

Due to his generosity in transferring institutional knowledge, the members of his team were also able to perform in-house repair of the aircraft that helped save P28 million for the AFP. The group’s exploits in rescue operations are not confined to helping fellow Bayawanons, as it has responded to calls for help from neighboring towns, and requests for training from local government units in Metro Manila. For proving that learning goes beyond the 4 corners of the classroom, turning a small-time gulayan project into a two-hectare vegetable garden that supplies local produce, provides livelihood and teaches the technology of organic farming, agricultural management, environmental restoration and sustainable development to students, their families, and the community.

Apart from providing sustenance to undernourished students, income from the vegetable garden is used to procure instructional materials, thus improving learning and development. For his dedication to public service as demonstrated by his provision of general services at the Don Mariano Marcos Memorial State University.

He performed tasks beyond his responsibilities with excellence and integrity. By ensuring that equipment and facilities are in good operating condition and by maintaining a clean environment, he helped the university save a significant amount of human and financial resources. The University was able to save around P100,000 on cost of labor services for construction of a school fence because of Mr Aquino’s services. For performing his duties with utmost professionalism, enabling the National Food Authority to serve the public more efficiently.

Apart from his regular function of ensuring proper care and maintenance of post-harvest facilities, he acted as welder and electrician for the repair and improvement of other machineries. His skill, innovativeness, and resourcefulness helped the agency save more than P240,000 that could have been spent for job-out services or purchase of new machine components. For her perseverance and commitment in addressing the civil registration problems of Datu Abdullah Sangki.

She initiated various programs in Muslim and indigenous people communities, including the Tirurays. Her efforts made citizens realize the value of having civil registration documents and contributed to drawing up a more accurate profile of the town. For exemplifying responsiveness in looking after the health, safety, and spiritual well-being of his constituents, transforming a once dreaded community into a vibrant and model neighborhood which boasts of improved daycare centers, regular child nutrition and safety programs, youth summer workshops, and increased tanod visibility.

He initiated sitio assemblies to foster transparent and participative governance. As chairperson of the Lupon Tagapamayapa, he established a system that efficiently managed amicable settlements, thus attaining a zero record of cases elevated to higher courts and ensuring peace and order. For his devotion to public service, using his financial acumen to boost the state university’s resources and help Filipinos attain prosperity.

As vice president for planning and finance, he improved the university’s financial status so that it can continue to be a leader in higher education and fulfill its social responsibilities. He chose to also share his expertise on financial literacy to the ordinary Filipino – the prison inmates, small store owners, midwives, mothers, business process outsourcing employees, and overseas Filipino workers – so they can effectively manage their finances. For giving hope and inspiration to hearing-impaired individuals in Siargao. For her passion and diligence in caring for children in conflict with the law.

Under her watch, the Regional Rehabilitation Center for Youth (RRCY) in Gingoog City established the Therapeutic Community, a parenting environment where residents – many of whom are neglected children – are able to express their thoughts and emotions. Residents are also taught to become more responsible through engagement in livelihood opportunities and through activities such as sports fests and educational trips.

She treats them with utmost compassion, care, dignity, and understanding. Many of the residents have been rehabilitated and are now helping marginalized people attain a better future. For the professionalism and responsiveness he has shown in his work in disaster risk reduction and management (DRRM).

He used his theoretical and technical expertise in environmental management, community relations, and monitoring and evaluation to engage indigenous communities in disaster preparedness. His persistent and passionate approach to advocacy also attracted the support of the United Nations World Food Programme and AEION Japan Foundation of Japan to boost the financial capacity of Tublay for DRRM. For his unparalleled commitment to raising the quality of education in Belison National School; for igniting the spirit of volunteerism among its faculty, students, and parents; for improving its curriculum and facilities;  and for making it a hub of culture and arts in the province.

He served with justness and sincerity, catering to the needs of students including those from far-flung areas by working for the construction of a students’ boarding house free of charge to avert absenteeism and improve school performance. Despite experiencing a mild stroke in 2012, he maintained a key role in the school’s success story. For his innovative leadership that turned the Baliuag Water District into an efficient government service provider.

Baylosis did not rest until all 27 barangays in the town were provided with water supply. He was also able to enhance the quality of life of communities through improved water quality and sanitation, with a Septage Management Program and the completion of the Baliwag Septage Treatment Plant. For her exemplary performance as Special Education Coordinator, as well as Music, Arts, Physical Education, and Health Department Head at the Lucena City National High School.

Through her Project IDEA, a responsive instruction intervention, she tirelessly used her skills and talents in producing successful graduates with special needs – teaching sign language, enabling dyslexic students to read, and providing ICT training. Aside from focusing on her students, she also mentored teachers, engaged parents and the communities to further provide support to the program. For their innovative work and excellent performance in making Pangasinan a major rice producer once again.

By collaborating with key players in rice production, the team customized its programs and provided raw materials, loan opportunities, irrigation support, and other services to rice farmers. Now on its 5th phase, the Accelerated Certified Palay Seed Production and Distribution program – which the team conceptualized – has already served 19,233 farmers and added 19,233 metric tons of palay to Pangasinan’s produce. For their sheer determination to turn Bulacan into a micro and small enterprise (MSE) capital in Central Luzon.

By providing trainings, management and technical assistance, and financial assistance to thousands of beneficiaries, the team was able to engage entrepreneurs and help them organize businesses and trade fairs. The team’s intensive campaign to drive economic activity resulted to P5 million worth of revenue to the provincial government in 3 years.

Tell us about your experience of good government service at www.fightcorruption.ph. You may also report via the form below.