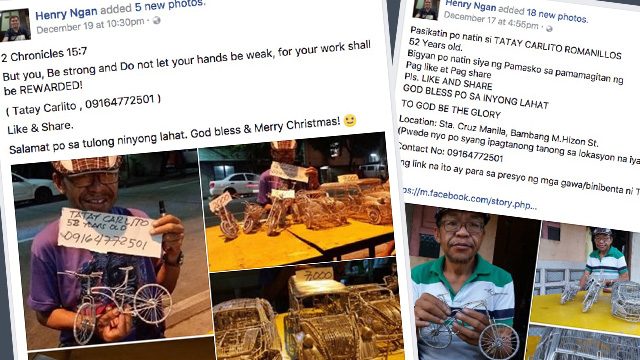 MANILA, Philippines – Photos of an old man creating craft using wires are gaining attention on social media because of the intricacy and design of his creations.

Netizen Henry Ngan posted photos of Carlito Romanillos on Saturday, December 17. In the post, Ngan asks netizens to “like and share” the post so they can help Carlito promote his work, and get him sales in time for Christmas.

Carlito has been working as an on-call driver for almost a decade. The 52-year-old is separated from his wife and has a daughter who works as a call center agent.

He told Rappler that when he first started his craft, it took him 6 months to finish just one motorcycle. Now, because of practice, he can finish one motorcycle a week.

He said he did not have any intention to sell his work initially. But when his friends saw his talent, they told him he could earn from it.

“Noong una, ayaw ko talagang magbenta dahil nga gusto ko sa bahay lang. Pang-koleksyon lang. Pero sabi nila, baka yumaman daw ako kapag nakabenta ako. Kaya sinubukan ko,” he added. (I really didn’t want to sell at first because I just wanted something for the house – for collection only. But they said I could make a fortune out of it so I tried selling it.)

Netizens stormed the post with praises for Carlito’s craft. Many asked how much the products cost and some said they felt proud to see such Filipino talent.

There are some discouragements, however, because customers are asking for cheaper prices.

Some of his more intricate designs are priced P7,000 (*$140). He said he uses his own money to buy the materials and that he learned the craft on his own with some guidance from the internet.

“I hope people don’t haggle too much because this is my work of art. I put a lot of effort into this. After all, I just wanted to make a hobby out of it,” Carlito said. – Rappler.com