5,700 stranded passengers bound for Matnog Port to be evacuated 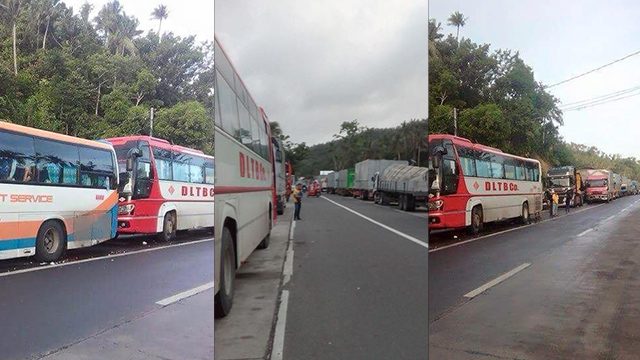 Facebook Twitter Copy URL
Copied
Many of the passengers have been in line for ferry trips since Friday, December 23

MANILA, Philippines – Local authorities will evacuate stranded passengers in line at the Matnog Port in Sorsogon, which became congested as ferry trips were cancelled due to Typhoon Nina (Nock-ten).

According to the Department of the Interior and Local Government (DILG), more than 5,700 passengers in 542 vehicles stranded along the Maharlika Highway will be housed in various elementary schools in the towns traversed by the route.

Matnog Port is the nearest ferry crossing between Luzon and the Visayas. Many of the stranded passengers spent their Noche Buena on the road.

Sorsogon is currently under signal number 3 due to the typhoon.

The DILG said the following schools will serve as evacuation centers:

Around 6,400 food packs will be distributed to the stranded passengers, through aid from the Department of Social Welfare and Development (DSWD).

According to Jhay-R Timosa of the Riders Anti-Crime & Emergency Response (RACER) group, as of 7 pm on Sunday, December 25, buses in the long queue were still in the same area where they have been since early Friday morning, December 23, when the Philippine Coast Guard (PCG) suspended ferry crossings to Samar.

“We’re afraid of our location because we are in a mountainous area and we might experience landslides,” he added.

According to Timosa, the local government of Matnog town has been providing passengers food and water since Saturday, December 24. – Rappler.com