A Sinulog story of love and devotion 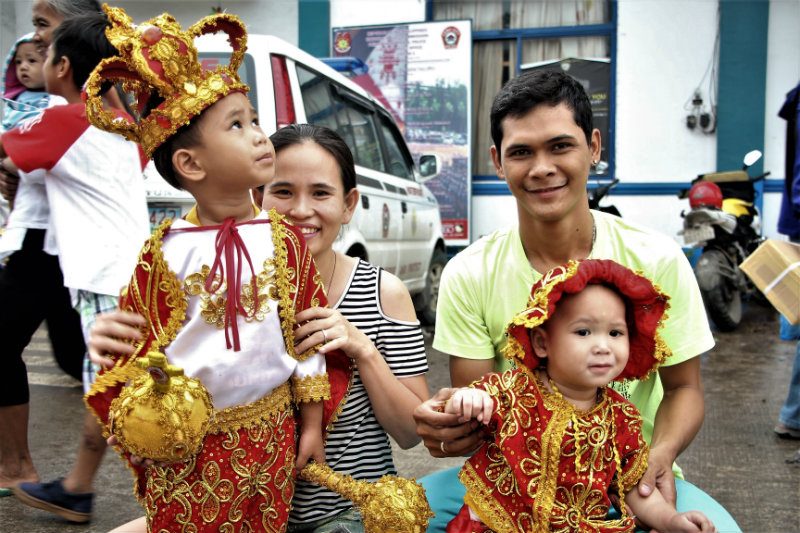 Facebook Twitter Copy URL
Copied
The love story of devotees Irish and Edwin Labatus traces its roots from the Sinulog celebration
CEBU, Philippines – Sinulog devotees have their own diverse ways of expressing their devotion to Señor Sto Niño. Often times, Cebuanos and other devotees express their reverence through personal prayers or by attending novena masses dedicated to the Holy Child. Cebuanos celebrate the 37th year of Sinulog, one of the grandest festivals in the Philippines, this 2017. The festival usually attracts more than a million attendees annually. (READ: Things to know about Sinulog) Amid a huge crowd of devotees holding streamers and balloons on Saturday, January 14, a couple patiently waited for the image of Sto. Nino pass by their spot in this year’s Sinulog celebration.  Carrying their two sons dressed up as the Niño, the Labatus family easily stood out from the crowd. Irish Labatus, 31, with her husband Edwin Labatus, also 31, said that since 2010 they have been dressing up their two children Ammar Roche Labatus, 1, and Rishedwin Nino Labatus, 4, in the image of the Holy Child. The two were devotees of Sto. Niño way back their younger years. In fact, their love story started during the festival, when they both danced to honor the Holy Child years ago.  “Ako ug akong bana mga dancer mi sauna mao nang nagkaila mi. Pareha rami og grupo mao na ang Tribu Kinaiyahan,” Irish said. (My husband and I were dancers before. We used to dance for baby Jesus and that’s where we met each other, because we’re on the same dance troupe, which was the Tribu Kinaiyahan.) Irish performed as one of the queens during the parade while her husband Edwin danced as the prince. Like in fairy tales, the two fell in love with each other. Their romance blossomed until they decided to get married and settle down. After they got married, conflicts and changes prevented them from dancing again for the Sto. Niño. Regardless, the couple continued to observe their devotion through their kids, even naming one of the after the Holy Child. The costume-wearing of their two boys has become an annual tradition for the Labatus family in recent years. “Every year gyud ni siya. Nahulog na ni nga among devotion ba. Atong nagminyo mi dili naman mi kasayaw mao nang nakahuna-huna mi nga sul-oban sila og pareha sa imahe ni Señor Sto Nino. Bisan dili nami kasayaw but paagi nila duha, naa gihapon,” Irish said. (We do this every year. This is our way of honoring Sto. Niño. When we got married we can no longer dance for Him so we decided to dress our sons with the image of the Holy Child. Even though we can no longer dance but through them (their sons) we can still feel it.) – Rappler.com   Apple Grace Danuco is the lead Rappler Mover in Cebu. She is also a graduating student at the University of San Jose Recoletos