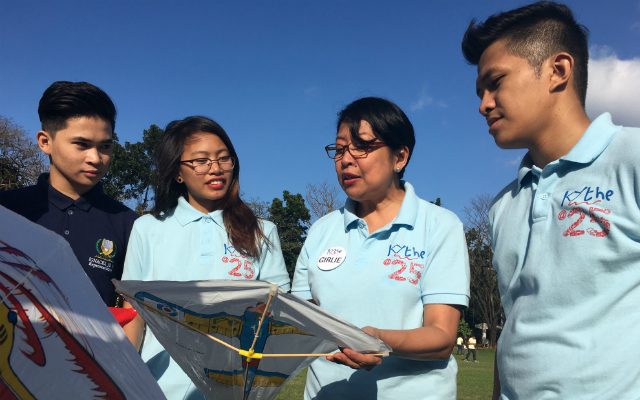 MANILA, Philippines – It’s been almost 10 years but Rudy Labata still remembers that fateful day of October 15, 2007. That day, at 13 years old, he was diagnosed with acute lymphocytic leukemia (ALL), a cancer that targets the lymphocytes in the bone marrow.

“I underwent chemotherapy for 8 months. Then for 1 year and 6 months, I was an outpatient taking medicine and some chemotherapy sessions,” Labata said in Filipino.

The cancer was difficult for Labata’s family, who did not have any means to pay for his treatment.

“That was my struggle. My mom and dad had to ask for help from many people. Mom is a househelp and dad is a tricycle driver. I also have a younger sibling,” he said.

“They didn’t just help financially but they also had events that helped lessen the anxiety of us kids. We forget the stress of being in the hospital and we feel normal like other kids when we are playing,” Labata recalled.

Now 22 years old, Labata has been fully healed of his cancer. The 3rd year Hotel and Restaurant Management student became a cancer survivor in 2010, and he was declared free from relapse in February 2015.

“The doctors declared me cancer-free because the chance of relapse is now only 2%. It’s a very small possibility but I still take care of my body,” he added.

On Saturday, February 11, Labata joined hundreds of cancer survivors and current patients of Kythe at the Ateneo de Manila University for the organization’s annual Kite Flying event. This year, Kythe is also celebrating its 25th anniversary of providing psycho-social support to kids with cancer.

According to Girlie Lorenzo, Kythe co-founder, the event has always been symbolic of the organization’s mission to uplift the spirit of children and their families. (READ: ‘Seeing kids fly’ – battling cancer with a smile)

“Kythe means to manifest oneself and we manifest our love for children with cancer and chronic illness through simple sharing and togetherness. Because of our interventions we have increased the compliance of the children for medical procedures and because of that we now have survivors,” Lorenzo said.

For the past 25 years, the organization has been practicing and advocating the Child Life Program, a method that uses play therapy and education to alleviate the anxiety of patients with chronic illnesses like cancer, heart conditions, kidney disease, and blood disorders.

In February 2014, a UN report said 3,500 new cases of pediatric cancer had been recorded yearly, around 70% of which were diagnosed in the late stages.

Despite this, the number of survivors has increased in the past 10 years. According to the Department of Health (DOH), around 82% of children with cancer reach adulthood. This is a significant improvement given that, a decade ago, the survival rate was only at 16%. She added: “Kythe is a founding member of the Philippine Alliance of Patient Organizations (PAPO) so we are pushing for universal healthcare for all patients. We are pushing access for cheaper medicine, and to institutionalize psycho-social care in healthcare.”

For the organization’s next decade, Lorenzo said they want psycho-social support to be the norm in all hospitals.

“Now we are moving toward providing child life services, psycho-social services in private hospitals. So we are going to create a demand that private paying patients will now have [the] Child Life Program… It’s not only the indigent patients [who need] psycho-social support but private patients as well,” she added.

Labata sees his present condition as his new life. Now, he’s giving back as a volunteer for the organization that helped him beat cancer.

“While I cannot yet give financial support, I help motivate other people and other kids. I tell newly diagnosed patients that it’s possible to overcome cancer even if you don’t have the resources. I tell them that prayer is powerful,” Labata said in Filipino.

He added: “The most important thing Kythe taught me is that we should always be ready to fight in whatever situation, that being positive goes a long way. God always has a purpose.”

As it celebrates its 25th year, Kythe will continue to champion for psycho-social support for children with chronic illnesses. It’s all about spreading the love, said Lorenzo.

“The public can help the organization by being volunteers – that is the most significant participation. Because we want you to feel, we want you experience being with the children and once you are moved by their experience, then you can share your resources, your skills, and whatever you may be able to offer.” – Rappler.com