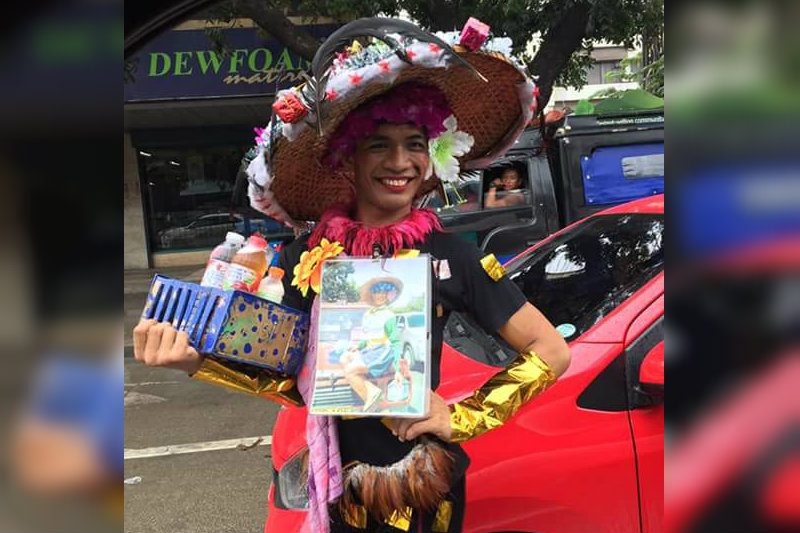 Teberio is a familiar face along A. Soriano St in Barangay Mabolo, Cebu City. The bubbly street vendor brings joy to passersby with his jokes and colorful costumes.

He said he started wearing costumes and making jokes to attract and entertain more customers.

(I put more effort. I want to catch people’s attention, so I thought of a unique way to sell bottled water.)

Since 2007, Teberio and his family have been selling in streets, their sole source of income. Teberio, then a 12-year-old grade school student, would wake up early to help his mother set up their small stall. By 7 am, he would leave for school. He would return to their family’s stall after dismissal and help his mother sell more bottled water.

This has been Teberio’s daily routine until he reached his last year in college.

Teberio’s life growing up was not as colorful as the costumes he wore to the streets. In an interview with Rappler, Teberio shared that he got bullied by his classmates because of what his family does for a living.

Instead of getting discouraged, he continued working to help improve his family’s condition.

(I used to get bullied because I was selling bottled water. Others even told me I’m crazy, but I did not care. I understand that sometimes we need to experience hardship in life.) Teberio eventually enrolled at the University of Cebu, where he took up Bachelor of Science in Education and majored in music, arts, physical education and health (MAPEH).

For being a good example and inspiration to others, he received the “Mayor’s Special Award” during the city’s Charter Day on February 24.  The young water vendor dedicated the award to his family.

(I did not imagine things will turn out this way. I am just enjoying what I’m doing. I am a very happy person, and when I have problems, I just smile to comfort myself.)

Understanding the importance of education, Teberio dreams of becoming a teacher to share knowledge to the youth.

(My dream is to become a teacher. I want to share my knowledge to other people. That has always been my passion, and I want to  lift my family out of poverty.)

(If you have a dream, fight for it and don’t ever give up until you achieve it. Being poor is not a hindrance to getting an education.)

Teberio plans to take the Licensure Examination for Teachers (LET) in September. – Rappler.com

Apple Grace Danuco is a graduating student at the University of San Jose Recoletos. She is also the lead Rappler Mover in Cebu.