Human error: Leading cause of road mishaps in Metro Manila 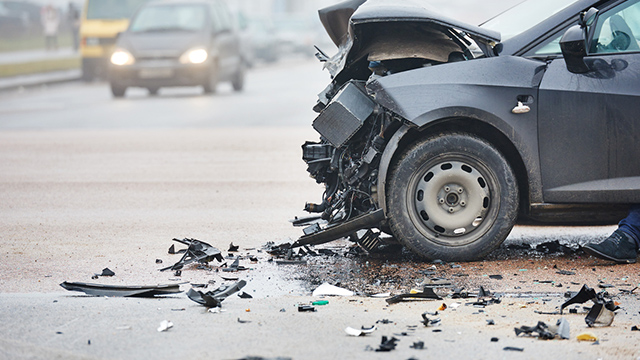 Based on MMARAS reports from 2010-2016, human error has been the top cause of road crashes in Metro Manila. Human error, as defined by the MMARAS, refers to the different forms of negligence and physical challenges or distractions that a driver faces, leading to road crashes.

Examples of these are inattentiveness, counterflowing, bad turning, losing control of the vehicle, speeding up, and sudden stopping.

In the 2016 MMARAS report, some human error examples included drivers suffering medical problems such as dizziness and asthma; drivers who are tired or were asleep at the wheel; and drivers under the influence of alcohol.

Aside from human error, other top causes of road crashes in 2016 are vehicle defect and road defect.

The chart below breaks down the causes of road crashes reported under the MMARAS:

According to Richard Domingo, road safety unit officer of the Metropolitan Manila Development Authority (MMDA), 80%-90% of the causes labeled as “No Accident Factor” is human error. This makes human error responsible for 87% of fatal injuries, 85% of nonfatal injuries, and 87% of damage to property. Overall, 90% of road crash accidents are caused by human error.

(We create engineering solutions, but what we need to solve are people’s attitudes. For example, when you widen the roads, cars will still speed. You implement speed limits, but people will not follow them if there are no traffic enforcers. It’s also part of Filipinos’ attitudes to try to game the system.)

Former Land Transportation Office spokesperson Jason Salvador cited several factors that affect road safety. “One is the road condition, the driver condition, and of course, the vehicle condition. We have to study all of this,” he said. 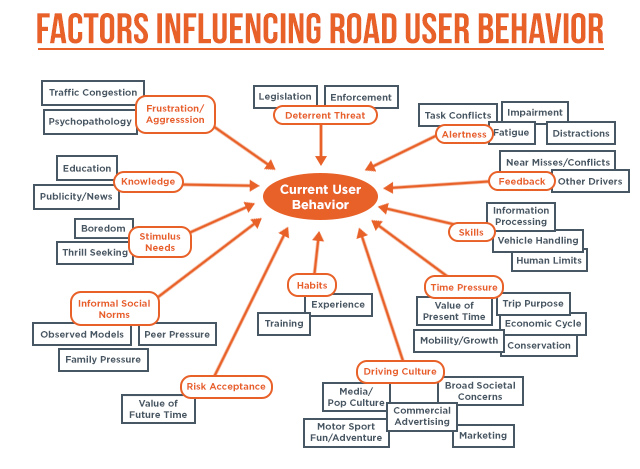 Words inside the orange chart show the main and most common factors that influence current road user behavior followed by the more specific factors in black boxes that contribute to the direct influences to road behavior.

Being aware of these factors is important to note when understanding data on road crashes because these can explain “why” road incidents occur, aside from the “who,” “what,” and “where.”

Academics Marc Green and John Senders explain this further in their research on Human Error in Road Accidents. They point out 3 main reasons for road crash incidents:

1. Perceptual error that is below the threshold for seeing. Examples of these are if the driver is blinded by glare, light is too dim, or pedestrians crossing the road cannot be easily seen because their clothes had low contrast.

2. When the driver could have detected critical information, but failed to notice these because his attention was focused elsewhere. This can be seen in instances when drivers would claim not to “see” the visible pedestrian or car, or how they would not notice the red lights or traffic signs.

3. When drivers correctly process critical road information but fail to react or respond accordingly. One example is a driver who reacts to skidding on the road by turning away from the skid. Another example would be when they make the correct decision yet fail to carry it out (“I meant to hit the brake, but I hit the gas”).

The lack of discipline among drivers is also reflected in the number of traffic violations they commit on the road.

In 2016, the MMDA recorded 250,219 apprehensions in Metro Manila, while the Land Transportation Office (LTO) recorded 710,759 traffic violations out of more than 5 million licensed drivers nationwide.

2016 LTO records show that the top 3 violations are driving without carrying the certificate of registration or receipt, driving without a license, and reckless driving.

Apprehensions from MMDA statistics also include failure to use the seatbelt, not wearing a crash helmet, overspeeding, driving under the influence of liquor, and using mobile phones or handset radio.

The accumulation of these violations and factors contribute to the 426 fatal injuries and 16,416 nonfatal injuries recorded in Metro Manila in 2016.

Drivers are also the most prone to non-fatal injuries at 49.02%, followed by passengers and pedestrians at 27.45% and 23.53%, respectively, in Metro Manila last year. (READ: Road deaths in PH: Most are motorcycle riders, pedestrians)

To curb road crashes, Domingo suggests improving public awareness through education, decreasing the number of private vehicles by improving the mass transit system, and most importantly, having road discipline.