Facebook Twitter Copy URL
Copied
The kids who live in the middle of the university belt do not know how to write or count. Dara Tuazon, a University of the East student, hopes to change that.

MANILA, Philippines – Donning her skinny pants and black top, Dara Mae Tuazon could very well have been off to an unforgettable summer trip on a Tuesday morning in April. But she was far from that.

Tuazon, with her mother and friends, spent the day at Gastambide Street behind the University of the East (UE) in Manila where she is an Elementary Education major in Early Childhood.

With that happy greeting, the 18-year-old UE student turned the busy and narrow street of Gastambide into her mobile classroom. For the past 4 months, Tuazon has been teaching at least 30 street kids various practical and values-based lessons on the street.

Her advocacy started on a rather uneventful day in December when she was eating alone at one of the food stalls along Gastambide. Two kids serenaded her and other customers with live music, but they were ignored.

Tuazon took her chance and struck up a conversation with them.

“Tinawag ko ‘yung isa tapos tinanong ko kung kumain na ba sila. Tapos hindi pa raw po. Dahil may extra money ako noon, sabi ko ‘sige, tara kain tayo.’ Dinala ko sila sa isang karinderya na kinakainan ko,” she said. (I called one of the kids and asked if they had already eaten. They said they hadn’t yet. Since I had extra money then, I invited them to eat. I brought them to an eatery I frequent.)

As they were eating and sharing stories, the UE student learned that some of the kids, despite living right smack in the middle of the school belt, did not know how to write or count. That should not be the case, she thought.

She decided that she would spend her free time teaching the kids. Tuazon started with the 3 children she met that day until their number grew.

Through word of mouth, her mobile class has grown to 30 in 4 months – with students aged 2 to 7.

“Nung unang-una po, na-meet ko sila, tatlo pa lang sila. Hanggang sa every day po, dumadami sila nang dumadami. Bawat araw may nadagdagan na isa o dalawa. Tapos doon every day na yun na tinuturuan ko sila. May mga worksheets akong ginagamit para maturuan sila,” she said. (When I met them the very first time, they were only 3. Until their number gradually grew each day. Each day there would be one or two who would be added. Then I would teach them every day. I use worksheets to teach them.)

Both student and teacher

During one of her mobile classes, Tuazon began to tell the story of “Ang Limang Tinapay at Dalawang Isda (Five Loaves and Two Fish).”

The kids who were fidgeting in their monoblock chairs or running around just a few moments ago sat still, their eyes fixed on their Ate Dara. Their mothers and other passers-by moved closer and listened to Tuazon as she began her storytelling too. 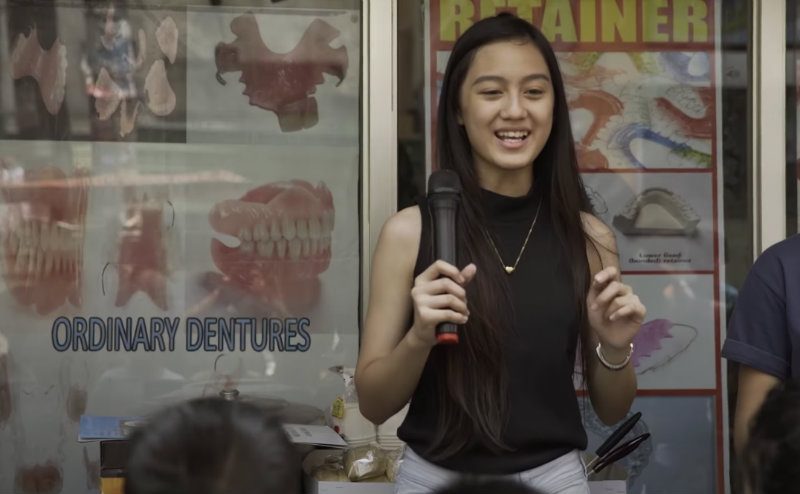 Tuazon’s vision for the Gastambide kids – her students – is for them to develop a passion for learning.

As simple as it may sound, however, the task did not come easy for Tuazon who assumed the role of both student and teacher at the same time. For one, the street is not exactly the most ideal place for learning.

“Dahil nasa street kami, ‘di ko sila masyadong natuturuan. ‘Di sila comfortable sa place dahil kung magsusulat sila, sa labas lang,” she said. (Because we hold classes on the street, I am not able to teach them well. They are not comfortable because when they write, it’s just outside.)

The sun could be unforgiving especially during the summer. Tuazon also has to compete with the chatter of people and the noise of jeepneys honking their horns.

Aside from the challenges she faces during classes on the street, Tuazon also has to make sure she efficiently juggles between study and advocacy. Time management is key, she said.

“Kapag time ng school, focused ako sa school. Kapag vacant ko, lahat ng time ko binibigay ko sa kanila. Last sem may every day ako na vacant so every day ko rin sila kasama,” she added. (If it’s time for school, I focus on my studies. When I’m free, I give all my time to them. Last semester, I had free time every day so I was able to spend time with them every day too.)

Tuazon wrapped up her story by asking the kids what they learned from the story.

As an education advocate, Tuazon emphasized the importance of teaching out-of-school youths like the kids of Gastambide Street.

Her students make up only a very small chunk of out-of-school youth in the country.

In 2015, the Philippine Statistics Authority reported that one in every 10 Filipino aged 6 to 24 was out-of-school. This amounts to 24 million Filipinos.

Tuazon’s initiative is not the first of its kind. Several individuals and groups engage in similar educational activities to provide informal education to street kids and out-of-school youth.

There are several factors why many children do not go to school, but according to a 2012 paper from the Philippine Institute for Development Studies, the most common problem is poverty.

While Philippine public schools do not charge tuition, it’s not the sole potential expense that families consider. School supplies, uniform costs, meals, and transportation add up to the costs as well.

Through her own little way, Tuazon hopes to make a difference and help provide education for the Gastambide kids.

(I want them to be able to study or graduate so when the time comes, they can use it. Education is also for them, too. It will allow them to work and overcome life’s challenges). – Rappler.com.