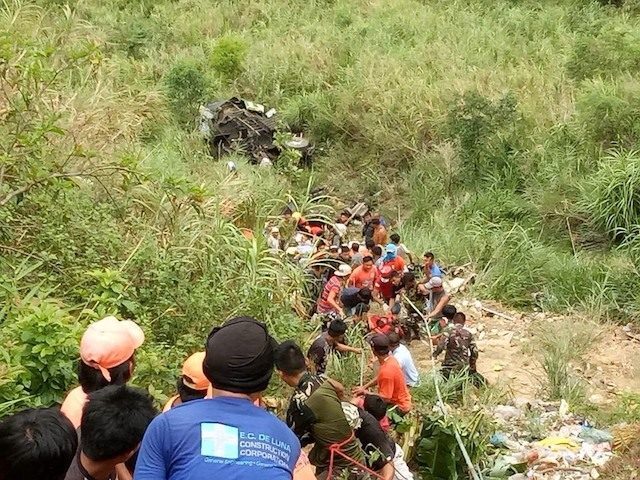 Facebook Twitter Copy URL
Copied
Former LTO spokesperson Jason Salvador says the condition of the road, driver, and vehicle may have been contributory factors behind the deadly bus crash in Nueva Ecija

MANILA, Philippines – Authorities are eyeing overloading as a possible cause of the bus crash in Nueva Ecija that killed at least 31 people, with initial reports showing the vehicle was carrying 77 people – more than its capacity of only 45.

But Jason Salvador, former Land Transportation Office spokesperson and now the manager of a global road safety project of the Ateneo School of Government, said there may have been other causes behind the deadly crash.

“There are several contributory factors. One is the road condition, the driver condition, and of course the vehicle condition. We have to study all of these,” Salvador said in a Rappler Talk interview on Thursday, April 20.

Based on survivors’ accounts of the incident, one of the bus’ front tires exploded, causing it to overturn, and then fall into the ravine. (READ: Why road crashes are no accidents)

Salvador said the conditions of the road, the driver, and the vehicle must always be taken seriously, as these may endanger the lives of passengers, as seen in the tragedy that happened in Nueva Ecija.

But aside from this, Salvador said it is also important to look at the mindset of those riding and driving the vehicle.

“There are reports that [the bus] was overloaded. They should have realized that this puts them at risk. You have to inform people that they should be able to learn about the red flags,” he said.

“For example, before they board a public utility vehicle, they themselves should know that they should look at the conditions of the vehicle – if this is safe enough, the way the driver is handling the vehicle, and [if] there are enough seats so that they can be properly secured,” he added.

‘Road safety is a public concern’

Whenever there are reports of road crashes, Salvador said people tend to look immediately at what the government can do. But he said the public should also be engaged.

“People should have a paradigm shift in their thinking that road safety is not just a government concern. It is everybody’s concern because lives are being lost,” he said.

He also pointed out that road safety is a global public health issue, with 1.3 million lives lost every year. (READ: IN NUMBERS: Road crashes in the Philippines)

“I think that the numbers are increasing and we have to mitigate this in more ways than one,” said Salvador. – Kurt dela Peña / Rappler.com