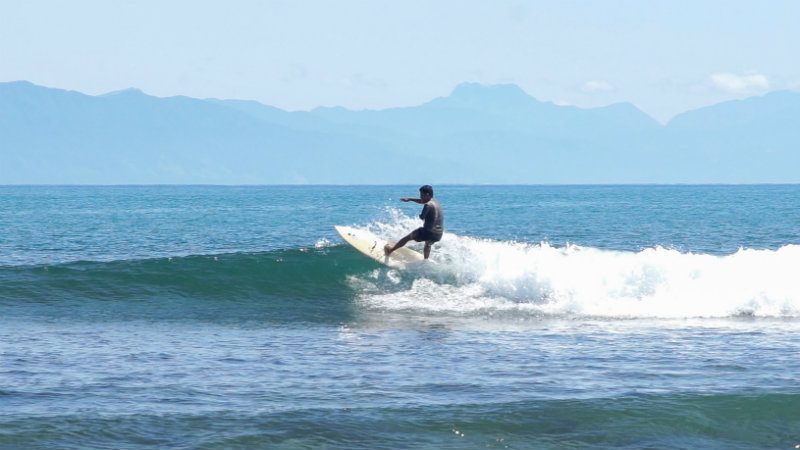 Facebook Twitter Copy URL
Copied
Harry Marzan manages to paddle, balance, and gracefully catch the waves despite not having a left arm. Read and watch his #InspireCourage story.

AURORA, Philippines – Harry Marzan, a 30-year-old surfer in Baler town in Aurora province, carefully paddled a few meters toward the beach break. He bobbed on the water in his swimming shorts and rashguard until a good wave showed up.

Fo Marzan, the first sight of the wave always served as an invitation. He dropped in, took off, and then rode the pretty barrel of wave along the coast of Sabang Beach in Baler, dancing with the ocean as if he were part of it.

Marzan clearly stood out among the hundreds of novice and seasoned surfers at the beach. But it was not only because of his close-to-perfect ride. He managed to paddle, balance, and gracefully catch the waves despite not having a left arm.

Marzan lives in San Luis, Aurora. But he considers Baler, a 15-minute ride away from his town, as his second home. A third-class municipality in the Philippines, Baler is also known to FIlipino surfers as the surfing capital of the Philippines.

On weekdays, he works at the local administrative office of the Department of Education (DepEd) in Aurora, facilitating retirement certificates and service records. When he is not at office, he spends his time near the sea.

His surfing journey started in 2011 after his nephew urged him to give it a try. He got by with the help of his friends who lent him a surfboard until he learned how to ride the waves.

“Surfing gives you a different feeling. It’s a stress reliever. It brings a different kind of high,” he said in a mix of Filipino and English.

He instantly fell in love with the sea that it only took him two weeks to successfully catch a wave.

Two years ago, a tragedy forced him to temporarily stop surfing. In November 11, 2015, Marzan along with other relatives, figured in a road crash in Aurora.

It was almost midnight and he was sitting on the left side of the passenger seat behind the driver. The driver dozed off and stirred the car towards the curb. They collided into at least two trees before the car hit a full stop.

When he woke up, Marzan was already tied to a hospital bed with countless of wires attached to his body.

According to him, he went under the needle twice so the doctors could remove his spleen and his left arm.

(I am one to quickly accept any situation. When they told me that they will cut my arm, I told them to go ahead if it’s for the best.) 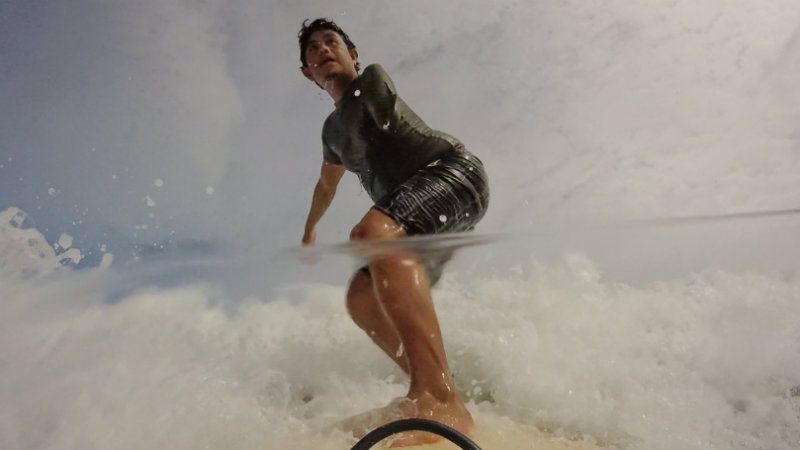 Marzan did not let the tragedy stop him from pursuing his passion. Three months after his surgery, he strolled on the beach and promised himself that he would bring himself back on the surfing track.

“Naglalakad-lakad lang ako sa tabi ng dagat, tapos sabi ko kailangan kong bumalik sa surfing. Ang ganda nung alon eh,” Marzan recalled. (I was strolling on the beach, and I told myslef that I need to get back to surfing. The waves are calling.)

Despite his doctor’s apprehensions, Marzan fulfilled his promise.

Like a baby learning how to walk, Marzan bounced back and took slow strides to learn how to surf with only one arm. He said, however, that the difficulty was nothing compared to the elation that he felt when he got back onto the surfboard.

“I felt very relieved. Even if I was being wiped out by the waves, it was okay. It was great to be back,” he said.

He fights discrimination, too, through surfing. For Marzan, surfing is his opportunity to break barriers and defy the steroetype set by people who do not know him. By carrying on, Marzan said that he got to prove that he is just as good as the other surfers in Baler. (READ: Man born with no hands finds his ‘hidden ability’ in miniatures)

Marzan is now back in his game.

To help him adjust, he had his board customized with a handle. Similar to the Bethany Hamilton’s surfing board, he said the handle would allow him to duck dive more easily. Hamilton, who lost her arm in a shark attack, is one of the most popular adaptive surfers in the world.

Marzan did not consider losing his left arm as a reason to quit his passion. It only strengthened his resolve to be a better surfer, he said.

(To other PWDs like me, just follow your passion – whatever it is that makes you happy. Push yourself. There are no limits. If I can do it, so can you.) – Rappler.com

#InspireCourage by sharing your inspiring stories of courage and its many forms on X.