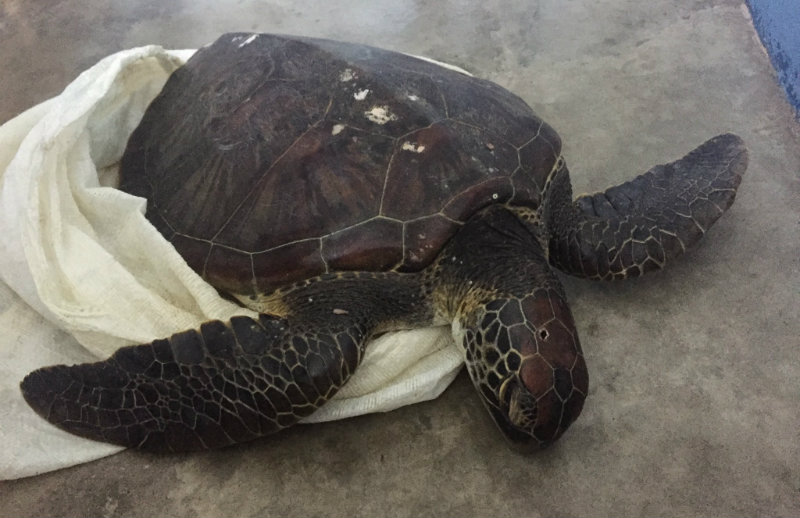 MANILA, Philippines – Pawi, an endangered green sea turtle, was killed at the Dauin Marine Sanctuary after a Russian tourist shot it in the head with a speargun on Wednesday, May 17.

Green sea turtles (Chelonia mydas) have been officially declared endangered species by the International Union for the Conservation of Nature (IUCN).

Officers of the Dauin Bantay Dagat immediately caught the foreigner and brought him to the authorities.

Police filed charges against Russian national Anton Likharev and detained him in the Dauin Police Station.

Likharev violated Republic Act 8550 or the Philippine Fisheries Code of 1998. Section 92 of the law states that “(i)t shall be unlawful for any person, natural or juridical, to fish with gear or method that destroys coral reefs, seagrass beds, and other fishery marine life habitat as may be determined by the Department (of Agriculture).”

Likharev could face a minimum of two years and a maximum of 10 years in prison, along with a fine amounting to as much as P2 million.

The incident also raised questions about how the Russian tourist was allowed to carry a speargun inside the sanctuary.

Many locals expressed dismay over the incident, urging the public to respect marine life.

Harold Biglete, owner and manager of Harolds Diving Center, took to social media to express his grief, saying that he often saw Pawi outside his diving center, feeding on the algae growing on the ropes.

Apo Island is a tourist destination where activities like snorkelling and scuba diving allow many people to spot sea turtles and other marine life in the area.

But as a marine sanctuary, marine life thriving in the area should be protected and recreational underwater activities should be carried out responsibly. – Rappler.com

Ishbelle Bongato is a Rappler intern. She studied AB Literature at the Ateneo de Manila University